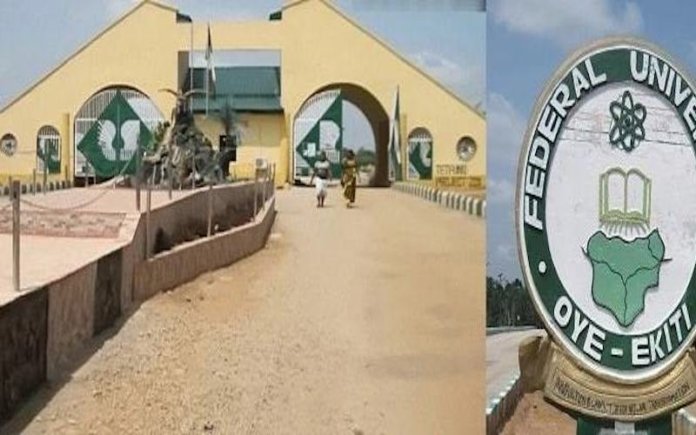 In its quest to rid the institution of criminal elements and ensure improved education standard , the Federal University, Oye Ekiti (FUOYE) has partnered the Department of State Services(DSS) and police in order to deal with suspected internet fraudsters and cultists among students.

Also, as part of the ways to ensure smooth take off of the proposed College of Medicine, the institution is to sign a Memorandum of Understanding (MoU) with the Federal Teaching Hospital in Ido Ekiti (FETHI) for temporary use of the facility to train their pioneer students.

Similarly, the university is also proposing another MoU with the Ekiti State Government to boost agriculture and ensure food security to make the state the food basket of the country through partnership in terms of training of personnel, research and community support.

The new FUOYE’s Vice Chancellor, Prof Sunday Abayomi Fashina, who stated this at the weekend at a press conference, where he unveiled his agenda, promised that criminalities would be uprooted completely from the school under his leadership.

The professor of Soil Science said: “We have written to the DSS and police to help us deal with cases of suspected fraudsters locally called ‘Yahoo boys’, and cultists. We have noticed such tendencies, and we will deal with it, because we won’t compromise standard.”

Fashina said his administration wouldn’t run a course without prognosis and assurances to get accreditation, adding that he has begun talk with Medical and Dental Council of Nigeria (MDCAN) for the running of the College of Medicine in the university.

“We are going to sign MoU with FETHI for temporary use of their facility in order to begin our medical college. We appreciate the Oye community for donating 100 hectares of land to this university for the building of our own teaching hospital.

“We are sure that we will get accreditation within the shortest time. The faculty of Basic Medical Sciences, which we just established, will serve as a Launchpad for the College of Medicine,” he stated.

On food security policy of his administration, Fashina said: “We are going to partner Ekiti State on food security. I played major role in the establishment of the Ekiti State School of Commercial Agriculture in Isan Ekiti. In the state, agriculture is key, and we as a university must play our own role.”

Fashina promised that he would unite and strengthen the factionalised Academic Staff Union of Universities (ASUU) in the university to ensure stable academic calendar and peace on campus, saying he has begun a process of reconciliation among contending forces.

On how to fund the university for effective performance, the academic revealed that the university would explore opportunities in part time programmes, affiliations with polytechnics and Colleges of Education, pre degrees and other programmes to rake in revenues to run the institution.