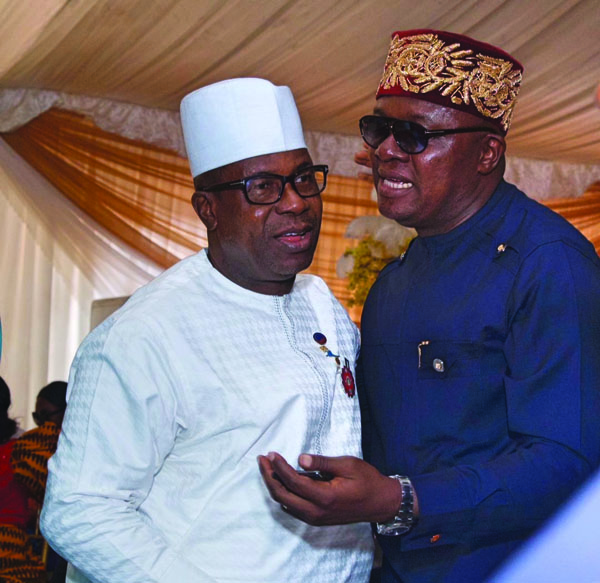 Wednesday, February 10, 2021, is one that I will remember for a long time. First, it is the day I had the great honour and privilege of being one of a few persons present at the headquarters of Chrome Group to celebrate with its Chairman, Sir Emeka Offor as he marked his 62nd year on Earth. It is also the day that I heard one of the most remarkable stories of compassionate philanthropy. I think the world will be a better place if more people listened to this story.

I arrived at the corporate office of one of Nigeria’s first indigenous oil and gas firms founded by one of the most generous and courageous people I know, Sir Emeka Offor. His birthday event, held under the climate of a raging pandemic, was scaled down to a socially distanced meeting at the lobby of Chrome Group’s impressive Abuja office. Tall banners were celebrating the company’s chairman, a man I have enormous respect for and whom I have come to regard as a mentor, friend, and brother.
It is remarkable enough that I was privileged to share in this exclusive and intimate event. But something very striking happened at that event, that has added fuel to the fire already burning in me. I am truly inspired. So inspired that I began writing this piece on my way to the Abuja airport to catch a flight to Asaba.

The Medical Miracle In A New Bussau Family
When conjoined twins, Habbeebat and Habbeeb, were born joined at the chest and abdomen, the chances of a successful surgical separation were slim. The University of Ilorin Teaching Hospital (UITH), where their parents took them hours after their delivery, had attempted to separate cojoined twins twice before. In 2005 and the second in 2016, both times, the operation failed, and the twins died.

Their hairdresser mother, Tawakalitu Hassan (25) and aluminium fabricator father, Ahmed Hassan (35) certainly couldn’t afford to pay for the multidisciplinary 66-strong medical team required to conduct the high-risk surgery at the specialist hospital. The kindness and generosity of Sir Emeka Offor changed this family’s story and made what appeared to be impossible became a piece of headline news.

Sir Emeka unlocked the possibilities, long before the Hassans brought their babies to UITH, by equipping the hospital with medical supplies and equipment worth $560,000. Through his foundation, Sir Emeka Offor Foundation, this uncommon philanthropist had made various donations of medicines and medicaments worth $180,000; medical equipment and supplies worth $380,000; and hospital bed sets and medical accessories worth $100,000.
On January 14, 2021, the specialists separated Habbeebat and Habbeeb and presented them alive to the press. The two girls now can grow up as individuals, with a new promise of life. If the story ends here, it is already impressive enough, but it doesn’t.

Sir Emeka made a cash donation to the medical team, which handled the delicate and complicated surgery. He sent more good news to Tawakalitu and Ahmed by placing them on a monthly allowance of N100,000 for the next five years.
The story of the twins’ family, as told by Dr Matthew O. Bojuwoye, a consultant gastroenterologist and secretary of the Medical and Dental Consultants Association of Nigeria, UITH Chapter who was present at the birthday event, shows us the transformational power of compassion at work. It demonstrates the positive impact that Sir E. is making on the people who encounter his generosity. It also shows that this philanthropist is a thoughtful giver who adopts a 360-degree approach to humanitarian interventions. He is an authentic treasure, a trailblazer and a great inspiration, and I have the unique honour of celebrating him today.

A Legacy of Social Investment in Health
Sir Emeka Offor, is one of those personalities who needs no introduction. He is widely celebrated globally as one of Africa’s most iconic business titans who founded Chrome Group of Companies in 1993; a conglomerate with investments in oil and gas, insurance, finance, power, logistics, hospitality, telecommunication, and travels. Sir Offor’s exploits in Nigeria’s oil and gas sector inspired an entire generation of Nigerian entrepreneurs to invest in our economy’s important industry. By so doing, he changed the face of an industry and changed the world.

Whereas most billionaires in Nigeria are famous for being wealthy, Sir Emeka Offor is most known for his uncommon acts of philanthropy. This business magnate founded his non-profit charity organisation, Sir Emeka Offor Foundation (SEOF) in 1993, the same year as his business conglomerate. Through his foundation, he has spread his unique message of compassion and hope to millions of people, not just in Nigeria or Africa, but also around the world. Sir Emeka Offor Foundation has made an enormous contribution to humanity’s advancement and upliftment in healthcare, economic empowerment, education, sports, and community building.

Indeed, it would take volumes to chronicle the good works of Sir Emeka Offor. His story has inspired me so much that I might author another book on his impact on humanity. I believe it would be a riveting read. From public records, it is safe to estimate that Sir Emeka has channelled hundreds of millions of dollars into the selfless act of uplifting humanity. I will tell part of this story by spotlighting his intervention in healthcare.

This respected business tycoon is one of the global leaders who worked tirelessly to eradicate river blindness globally. He has made several donations to causes committed to tackling this terrible disease. In 2015, Sir Emeka granted former US President Jimmy Carter’s Carter Center a $10 million gift, the largest from an individual African donor to the non-profit towards its efforts to end river blindness in Nigeria.

The Rotary Club’s PolioPlus ambassador in Nigeria, Sir Emeka Offor has played a critical role in eradicating polio in Nigeria. At the 2014 Rotary Convention in Sydney, his generosity was on display when he donated $1 million to The Rotary Foundation towards his dream of seeing a polio-free Nigeria. The foundation announced that this donation raised his contribution to the cause to $3.1 million. Since then, he has expanded his benefaction to more than $4 million, making him “the single largest donor in Africa”. According to this uncommon humanitarian, the cause was a commitment he made to his younger self to “do something significant to end polio” after seeing many of his friends suffer terribly from the dilapidating disease. There’s more.

Through his foundation, SEOF, Sir Emeka has also built and equipped several healthcare facilities across Nigeria; an example is the amenity ward valued at close to N50 million. He donated it to the National Orthopedic Hospital in Enugu. These facilities provide free medical treatment and drugs to underprivileged Nigerians. Through his foundation, Sir Emeka has funded many Nigerian universities’ pharmaceutical and medical faculties, including the University of Nigeria and Chukwuemeka Odumegwu Ojukwu University.

SEOF has partnered with several governments in Nigeria in the quest to provide quality healthcare to those who cannot afford it. In the wake of the novel coronavirus pandemic in March 2020, Sir Emeka made history, again, when he announced a $30 million donation in medical equipment to Nigeria and 18 other African countries.

His contributions to the development of healthcare systems go beyond Africa. In 2015, Sir Emeka declared war against glaucoma, announcing a sponsorship agreement with the University of Mainz in Germany to fund research towards eliminating the disease. He pledged an annual grant of £250,000 to the school’s Department of Opthalmology and his foundation instituted a Nigerian Fellowship for Cataract Surgery and Glaucoma Management in the same university.
All these uncommon acts of generosity are as mind-blowing, as they were heartwarming.

Sir E: A Profound Inspirator
Sir Emeka Offor is one of the people whose works inspired me to philanthropic action, leading to the establishment of my foundation, Valentine Chineto Ozigbo (VCO) Foundation. Through my foundation, I have purposefully given back to women and youth in my community for the past seven years. While working to lift these local communities in my home state of Anambra, I realised the great need for social intervention in the lives of our people in a profound way.

During my interactions with the beneficiaries of my foundation’s charity endeavours, it impressed me that an individual’s compassion can touch many lives, but a systemic change will go so much farther. A fire was ignited in me and set me off on my current quest to govern my people, to make a more significant impact on society, to shape our state for good.
I am now on a relentless quest to intervene and fix what’s badly broken with our social safety system; to ensure that every single child in Anambra is given a quality education as a right, not as a privilege. To ensure that our women are taken care of and given a seat on the table of power. On Wednesday, Sir Emeka added more fuel to this fire. And I am grateful to him for his bold example.

Fixing Anambra’s broken healthcare system was a top priority for me when I decided to run for the governorship of our State. In this pursuit, I relocated from Lagos to my rural community in Anambra a year ago. Since then, I have visited hundreds of communities in our 21 local government areas meeting my people at the grassroots. Today, I can say for sure that our healthcare system is in dire need of a complete overhaul. Our people, especially our women and children, don’t deserve this dysfunctional governance; and I am on this mission to govern because I believe that we can do better, and we will do better.

We intend to provide the strong, purposeful, and courageous leadership that will build the most efficient, affordable, and qualitative healthcare system Nigeria has ever seen. We have a blueprint for governance that will make this quality healthcare within the reach of our people. We know that with the right leadership, it can be done. With God on our side, and with the mandate people of Anambra, I am convinced that we will fix the system and will work for our people, again.

Thank you, Sir E for giving so much of yourself to the service of humanity. In so doing, you inspired this village boy from Amesi and set him on a path to bring the transformational change that our people desperately need. I salute you on your 62nd birthday. I will be forever grateful for your service and leadership.
God bless you.

––Valentine Ozigbo is an award-winning global CEO, a change-maker, and champion for continuous improvement. He is on a mission to change the world by raising the consciousness of humanity. He is the immediate past President and Group CEO of Transcorp Plc, a conglomerate with interests in hospitality, power and oil and gas. He is the Chairman of Feet ‘N’ Tricks International, the largest promoter of freestyle football in Africa and the Founder of Valentine Chineto Ozigbo Foundation, a non-profit focused on youth empowerment and building future leaders`