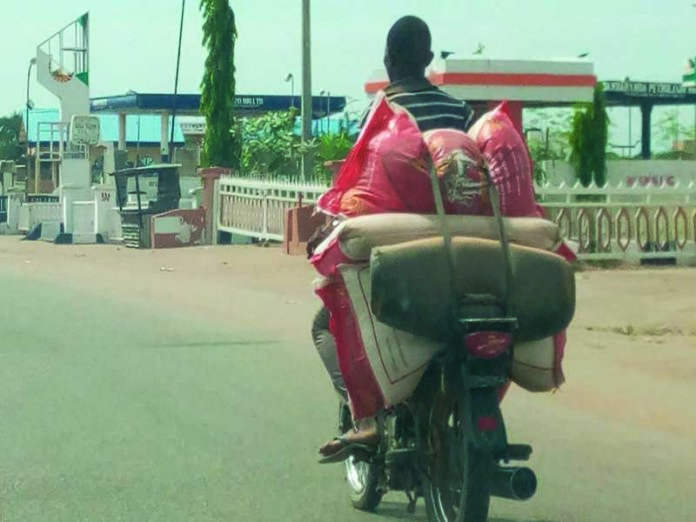 The continued closure of Nigeria-Niger border at Jibia town, Katsina State by the officers of the Nigeria Customs Service (NCS) despite President Muhammadu Buhari’s directive for its reopening is not yielding any positive results as smuggling of contrabands into Nigeria remained a daily occurrence at the border town. On December 31, 2020, Buhari approved the immediate reopening of all land borders in Nigeria following the earlier reopening of Seme, Illela, Maigatare and Mfum after 15 months of outright closure that stoked stern criticism across Africa.

While the President directed immediate reopening of the land borders, he did not approve the importation of rice, vegetable oil, second-hand clothes and other contrabands, but the items are discreetly smuggled into the country via illegal routes at the border towns in Katsina under the cover of darkness. Buhari’s directive was conveyed in a three-paragraph circular issued by the Comptroller General of Immigration Service (CGI), Mr. Muhammed Babandede and addressed to all comptrollers of Immigration in all border states of the federation, including Katsina.

The circular christened, “Presidential Directive on Reopening of all Land Borders and Submission of Status reports on its Implementation”, was received by the Katsina State Comptroller of Immigration, Abdulrazak Mu’azu on January 13, 2021. It reads: “I am directed to convey the approval of His Excellency, the President of the Federal Republic of Nigeria on the reopening of all land borders with effect from 31st December, 2020 following the earlier reopening of the four land borders (Seme, Illela, Maigatare and Mfum).

“Consequently, all comptrollers of Immigration Service in all border states as well as Officers in Charge of all border control posts (Mega, medium and mini) are hereby directed to work in close synergy with other relevant agencies towards the successful implementation of the President’s directive. You are further required to forward a report of immediate compliance with this directive”.

Consequently, there was ceremonial reopening of the Nigeria-Niger border on January 14, 2021 which was well-attended by traders within and outside the country, including the Deputy Comptroller of Immigration in charge of the border, DCI H. Ibrahim, customs officers and police at the frontier of the border in Jibia town. However, investigation by THISDAY revealed that officers and men of the Nigeria Customs Service stationed at the frontier of the border have flouted the presidential directive by closing the border few hours after it was reopened by the Immigration boss. The flouting of Buhari’s directive also affected three other recognised border posts with Niger Republic—Kongolom in Mai’Adua, Babban Mutum in Baure and Dankama in Kaita Local Government Areas of the state, while smuggling of counterfeits still persists in the areas.

THISDAY uncovered the contravention of the directive during a visit to Jibia border post in Jibia Local Government Area of the state, with residents alleging that the customs officers closed the border to continue their illegal activities in the area. During the visit to the border town, THISDAY also observed that the officials of the Customs service restricted human and vehicular movement across the border post while its main entrance was under lock despite the directive of the president. Investigation further revealed that the operatives of the Service denied traders and travellers entry and exit at the border town, including selling of fuel in communities close to the border post.

There was restriction of movement as checking of goods and vehicles remained in place at the more than 30 checkpoints mounted by armed customs and police officers along Katsina-Jibia highway. The customs service, however, justified its action on the ground that it had not received a formal directive from its supervising ministry to reopen the border. An official of the customs service, who spoke privately with THISDAY, said security agencies at the border post were still expecting official directives to reopen the border.

Concerned about the conflicting directives, some traders in separate interviews in Jibia lamented endless extortions by Customs officers, insisting that the officers closed the border to continue with their illegalities in the area. They claimed that smugglers were being aided by security personnel, including policemen, Customs and Immigration officials, who allegedly collected money from the smugglers to allow a free passage at checkpoints between Jibia and Katsina metropolis.

One of the traders, Tijjani Kabiru lamented that the border closure had contributed negatively to the socio-economic imbalance of the state and the country in general, calling for its reopening for business to thrive. He said residents and traders of the border town, who were rejoicing when the border reopened, were disappointed at the action of the Customs Service.

He said: “Immigration officers came to Jibia Thursday morning; that was on January 14, 2021 where they announced the official reopening of the Nigeria-Niger border and directed us to commence commercial activities with our brothers in Niger. Unfortunately, around 2pm that same day, some heavily armed customs officers came and locked the gate of the border. As I speak to you, the frontier of the border is under lock and key. The officers are even threatening to kill us if we go there”.

Another trader, Jamailu Muhammad, alleged that the prevailing extortion by customs officers and other security personnel was detrimental to trade facilitation and ease of doing business and also crippled the economy and impacted negatively on residents of the state. He said: “There are more than 30 checkpoints between Jibia to Katsina being manned by officers of the NCS, the Nigeria Police, the Nigeria Immigration Service and the Nigeria Security and Civil Defense Corps. But they are doing nothing but extortion that is why they don’t want to reopen the border”.

However, despite the closure of the border by the Customs officers, smuggling still remains a booming business in the state as smugglers have resorted to the use of illegal routes to ferry in bags of foreign rice, bales of second-hand clothing and other contrabands. Findings by THISDAY revealed that while strict compliance appears to reign at the main border post between the two countries, illegal businesses still thrived at some bush paths and sundry illegal entry points where “unscrupulous” security operatives, work hand-in-glove with smugglers to smuggle contraband goods into the country.

The smugglers go through the laborious route of offloading the contrabands from trailers few meters away from the official border security post and use J-5 buses, Gulf 4 and 5 vehicles and motorcycles to ferry the items from their hideouts into Jibia for onward transportation to their warehouses in Katsina, Kano, Kaduna, Zamfara, Jigawa States and some other parts of the country.
The smugglers are sometimes seen in large numbers or individually, passing through longer routes to evade Customs officers. Instead of going through the Jibia-Katsina road, they move to Batsari Local Government before linking Katsina to deliver the smuggled rice on request.

Some of them who go directly to Katsina from Dan Faru or Dan Issa in Niger Republic, using Peugeot cars popularly called Gwarama by locals, charge between N1,500 to N2, 000 to deliver a bag of rice to shops and depots. Most times they drive through farmlands to get to Katsina town.

Sadly, women are not left out in this illegal trade. They employ several tactics to smuggle rice. For instance, they divide a bag into three or four places and back them, using their Hijabs to conceal it and pass security checkpoints along the 30km Jibia Katsina road in commercial vehicles. Meanwhile, at Kongolom border town, Maiadua Local Government Area, most smugglers of rice are using local routes from Maimaje, Botsotsuwa, Tsatsumburum and Yekuwa settlement, all in Niger Republic, to ferry their commodities into the country, using motorcyclists.

In Dankama, a border town in Kaita local government, rice is smuggled through farm lands from MaiKani village. It was observed that youths in the area are paid N6,000 for a five kilometer trip to ferry rice from the said village, using Peugeot J5 buses and Golf cars. While in Babban Mutum, (Baure LGA) most of the shops are not displaying foreign rice but sells on request to customers. The goods are usually delivered to customers’ houses for fear of harassment by security, particularly officers of the Nigeria Customs Service.

But one of the smugglers, who pleaded anonymity, told THISDAY that those of them engaged in the business understood the risks and dangers involved but affirmed that they would not encounter any problem unless they refuse to cooperate with security operatives at the checkpoints. He said: “Unless one refuses to pay the bribe for each category of items or when it is time for the officials to sacrifice you to prove that they are working. That is when they will arrest you in the name of smuggling”.

The source, who is into smuggling for four years, said business had been booming for them because they do convey a bag of rice from Maradi (Niger Republic) to Katsina at the cost of N4,000 each. “We used to charge rice merchants N4,000 for each bag of rice carried from Maradi to Katsina State. Although, we do follow bush paths and sometimes custom officers do arrest us. But once we give them some monies, they allow us to pass even though some of them are very stubborn,” he added.