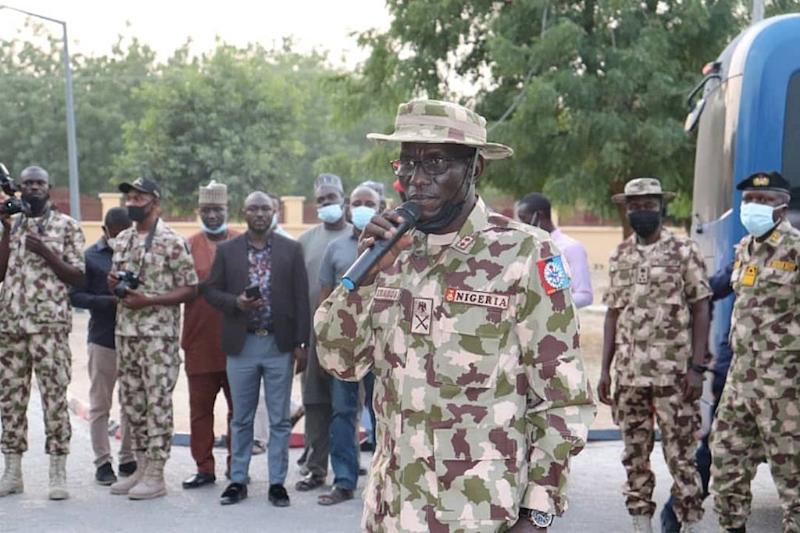 A major shake-up is imminent in the military as the new service chiefs put finishing touches to a raft of strategies to revamp the counterinsurgency operations in the North-east as a step towards an earnest routing of the terror cartels in the area.

The Defence Headquarters (DHQ) said yesterday in Abuja that the Chief of Defence Staff, Maj. Gen. Lucky Irabor, and his colleagues had been brainstorming on fashioning a new approach to combating the insurgents in line with the marching orders given them by President Muhammadu Buhari.

The Coordinator of the Directorate of Defence Media Operations (DDMO), Maj. Gen. John Enenche, told reporters that part of the new approach includes carrying out a major shake-up in the military, which will entail personnel, operational and logistics changes.
Enenche spoke barely 48 hours after the Chief of Air Staff, Air Vice Marshal Oladayo Amao, announced the presidential directive to the service chiefs to crush the insurgency.

Amao, during a tour of military formations in the North-east, including Sector 3 Operation Lafiya Dole (OPLD) and the Multi-National Joint Task Force (MNJTF), on Tuesday, had said in Maiduguri that the president routed the order through Irabor for them to come up with new strategies to subdue the insurgents.

He stated that he has had meetings with the other service chiefs leading to the continuing tour of the military formations.
“Mr. President had given the Chief of Defence Staff, along with the service chiefs, the onerous task of bringing the war against insurgency to a decisive end in order to restore normalcy to all troubled parts of the country,” he added.

He stated that they had already begun to “take action in this regard, holding several meetings to evolve strategies for better synergy in the joint operations.”

However, shedding more light on the impending dispensation in the fight against insurgency, Enenche said in formulating the new counterinsurgency approach, the service chiefs had visited the North-east to meet minds with theatre commanders and other critical stakeholders in the epicentre of the insurgency.

According to him, the service chiefs, having interacted with troops and commanders are working on new strategies aimed at ensuring victory for the armed forces.

He said: “You are all aware of the recent changes in the leadership of the Armed Forces of Nigeria. There is no doubt the changes would usher in new modus operandi for tackling the security challenges in the country.

“The service chiefs, on assumption of duties, immediately hit the ground running by conducting an operational visit to the North-east. They have also visited some operational areas in the country to interact with troops and commanders in the field in the various theatres.

“The visit is aimed at ensuring that the military high command comes up with new ways and means of tackling the security challenges.”
On the expected shake-up Enenche said there would be changes in “all strata of the military in view of the change of service chiefs.

“There would be more re-organisation of military units. Change of service chiefs will bring about changes and new modus operandi and logistics.

“In line with the re-organisation of the Armed Forces of Nigeria with the appointment of new service chiefs, the operations of the armed forces are equally being reorganised to tackle the security challenges in the country effectively.”
Enenche stated that the service chiefs had commenced action at all levels.

“These include carrying out strategic, administrative, operational and logistics adjustments, changes and reviews, to improve the security situation in the country.

“As such, all stakeholders are requested to give maximum support to the Armed Forces of Nigeria under the leadership of the Chief of Defence Staff,” he said.

The Defence Headquarters also solicited the support of Nigerians for the efforts of the military in tackling security challenges confronting the nation.

“Our collective efforts are essential in the fight against the various security vices in the country. The military high command reassures the general public of its untiring dedication towards securing the country.

“Members of the general public are enjoined to continue providing timely information on the activities of criminals in their various localities to the military and other security agencies for prompt and effective action,” he added.

He said the military had sustained aerial and ground offensives in the various theatres of war in the North-east, North-west and other geo-political zones.

“The gallant troops within the period in focus carried out several land and air operations. These include clearance and ambush operations as well as aggressive ground and aerial patrols in order to ensure the security of lives and property within the zones,” he stated.