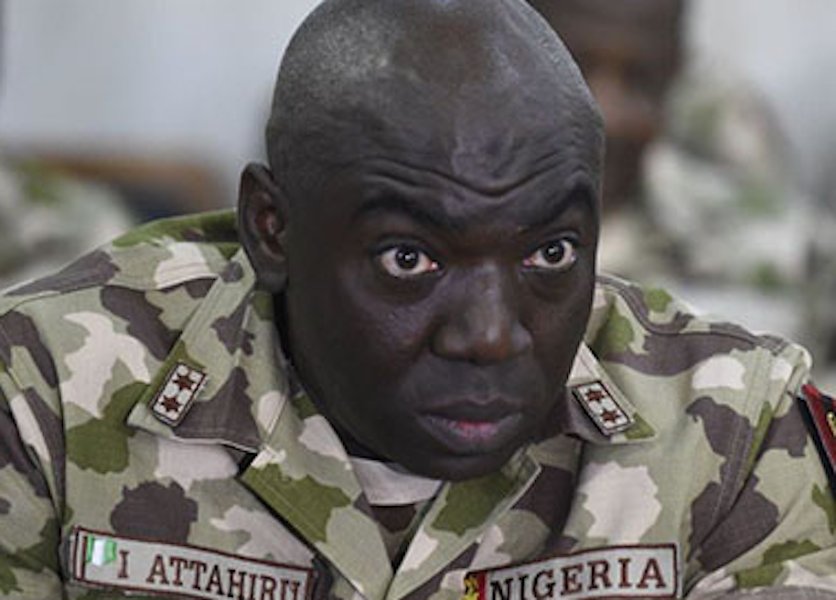 The Army chief had last week joined other service chiefs in accompanying the Chief of Defence Staff, Maj Gen Lucky Irabor on their maiden visit to Theatre of Operation.

Attahiru who visited troops at Special Army Super Camp in Ngamdu, commended them for their loyalty and doggedness in the ongoing fight against Insurgency in the North-east.

The new COAS also promised to end the insurgency war soon by wiping out Boko Haram from Nigeria.

He assured the troops of his support and robust welfare packages to boost their morale as they continue the war against insurgency.

He also extended greetings from the President and Commander in Chief of Armed Forces of Nigeria, President Muhammadu Buhari to troops.

He also promised to address the problems of overstaying by some soldiers in the Theatre.

“I have met Commanders, I have received briefs and they told me what their critical requirements are with emphasis to the Military effectiveness.

“This we are working in tandem with the troops of the Multinational Joint Taskforce towards the defeat of terrorists.

“On issues equipment and other logistics items, I have been briefed on it and we are making tremendous effort on it.

“As your Chief of Army Staff, I have reliably been told on the challenge of kitting. In the next couple of weeks, you will have your uniforms and protective gears.

“Furthermore, I know the issue of over stay in mission area has been a major problem. Be rest assured that in the next couple of weeks and months we shall have a standard rotation plans for replacements of troops who have overstayed with fresh hands.

“The President and Commander in Chief is interested on what is going on in this Theatre and other operations across the country.

“So first-hand information gets to him and he will strive and ensure that those problems are resolved for the overall successes of the Nigerian military for the progress of the nation,” he said.

In his remarks, Major General Faruk Yahaya, the Theatre Commander commended the the Army Chief for visiting the Theatre twice within a week after his appointment.

He said the efforts indicated General Attahiru’s concern and priority to welfare of troops and the ongoing military operation.

Yahaya said that he had confidence that with the experience of COAS as a former Theartre Commander, more decisive measures would be taken in fighting the terrorists and other insecurities in the country.

The Army chief was also briefed by the Sector Commander, Sector 2 OPLD, Major General OO Oluyede, on the successes and achievement recorded since the commencement of Operation TURA TAKAIBANGO within Sector.