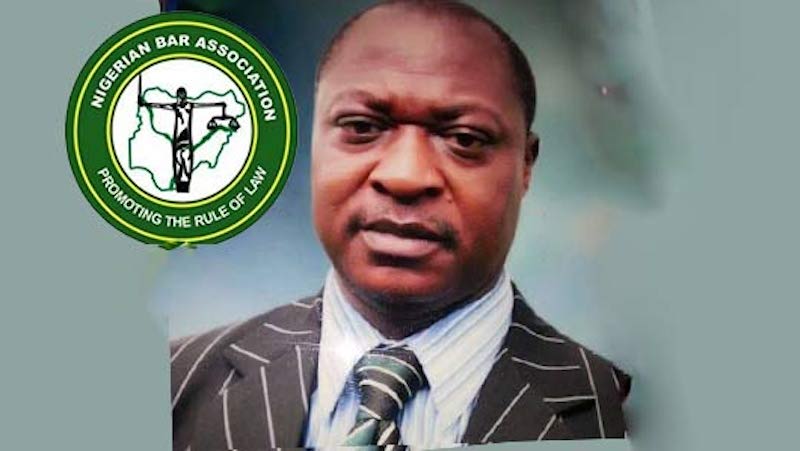 The Imo State Police have confirmed the gruesome murder of a 64-year-old man, Mr. Ndieonyema Nwankwo who was the former Chairman of the Nigerian Bar Association (NBA), Owerri branch.

This is coming as the Owerri branch chairman of the association yesterday confirmed that their colleague, Nwankwo, was murdered in his office at 42 school road in Owerri, after which his car and phones were taken away by the suspected assassins.

A statement issued yesterday by the Imo State Police Public Relations Officer, Mr. Orlando Ikeokwu, explained that when the command received the report of the murder, operatives were immediately deployed to the scene of the incident (his office).

According to the PPRO, they met the lawyer’s lifeless body in a pool of blood and machete cuts were seen on his neck.

Ikeokwu noted that while taking a further look around the office, a machete with bloodstains, suspected to have been used in inflicting the cuts on him, was found on the floor.

He said it was also discovered that his car and other yet- to-be identified items were taken away.

The state Commissioner of Police, CP Nasiru Mohammed, while calling for calm, has also ordered an investigation into the matter, with a view to arresting the fleeing suspects and recovering the stolen items.

Meanwhile, the Owerri branch of NBA yesterday confirmed that their colleague, Nwankwo, was murdered in his office at 42 school road in Owerri, after which his car and phones were taken away by the suspected assassins.

The NBA, Secretary, Mr. Chinedu Agu, in a statement, said the incident happened on February 6, 2021.

He added that the whereabouts of Nwankwo’s driver said to be with him at the time of the incident was unknown.

Narrating how the tragedy occurred, Agu said: “At about 8.15am today on my way to Church for 8.30am Mass, I received a call from the Chairman, JI Ogamba, detailing me to liaise with the former Secretary, Ishmael Nkwocha to take Police to NH Nwankwo & Co, at 43 School Road Owerri, to ascertain the safety of N.H Nwankwo, who left home for work yesterday Saturday, February 6, 2021 and was yet to return from work.

“However, earlier to the call, Ishmael Nkwocha, who shares same office space with him had, in response to frantic calls from his family members over the uncertainty of his whereabouts, gone to his office to meet same locked.

“On opening the Entrance door, he met Nwankwo’s main office locked and with traces of blood on the door to his (Nwankwo’s) office.

“Not very sure of the situation he went to the Homicide Section of the State CID, going with him Forensic Experts from the Police Headquarters to the office to have it properly opened by themselves in order not to contaminate evidential materials.

“When the forensic experts arrived at 9:56 hours with their gadgets, they opened the door only for us to find his bulky frame lying lifeless inside his office in a pool of his congealed blood.

“On a closer inspection, Nwankwo appeared to have been savagely matchetted by his assailant, as a very gaping cut was seen on his neck, a monstrous cut of not less than of about 30 centimetres with only about less than 50 per cent of the flesh in his neck region holding the head.

“Blood splashes were seen on the roof, fans, Printer, Computers, table, files, seats, books, bookshelves inside his office suggestive of a ferocious matchetting of his neck.

“Nwankwo was suspected to have been busy working as his Printer, Computer, Standing Fan were on while a writing pad containing jottings unrelated to this incident and a Pen were found on his Desk.”

He further said: “A bucket of water was seen in his office, with which the Assailant must have washed his hands and Matchet used in this act.

“A search of the office revealed a Matchet abandoned inside the Toilet of his office with which the assailant was suspected to have used to cut his neck.

“When his body, which lay half prostrate was turned matchet cuts were seen on his Wrist also and the footprints captured by forensic experts suggested the act was done by two persons as the two footprints were unidentical.

“As at the time of this Provisional report, Forensic Experts are still gathering evidential materials for their use accompanied by myself, LC Ugorji, Uche Osuji, Ishmael Nkwocha, JI Ogamba, DO Nosike and a host of other lawyers.

“Meanwhile, his driver, who reportedly was the only person with him in the office on Saturday, is at the time of this report at large, with Nwankwo’s phones, and Car nowhere to be found.

“Arrangement has just been concluded to take the lifeless body to the morgue. This is one death too many; one murder too savage