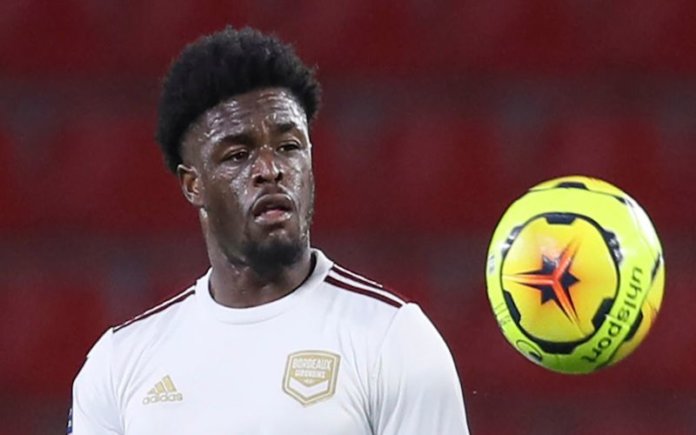 Seven years after leaving his boyish club, Fulham, Josh Maja is returning to Craven Cottage to rescue the Cottagers from relegation waters. How well the Whites academy product can save Scott Parker’s side from sinking remains to be seen

Nigerian international, Josh Maja joined Fulham on the last day of the transfer deadline from Bordeaux on loan with option to buy for £9m.

Maja originally joined Bordeaux from Sunderland in January 2019 after scoring 16 goals in League One but is now on his way back to England to join Fulham.
Maja said he is “excited and proud” to return to Fulham, seven years after leaving the club’s academy to join Manchester City’s youth set-up.

“This is a big opportunity and I look forward to meeting up with the team and working hard to achieve positive results,” he told the club’s website.

Fulham boss Scott Parker had been vocal about his desire to bring in a striker on deadline day to provide more firepower and cover for Aleksandar Mitrovic.

On the decision behind the signing of Maja, Parker is of the opinion that the Nigerian international learnt his footballing trade at the Fulham academy before moves to Manchester City and Sunderland, so he won’t have an issue adapting to life in the Premier League.

Parker revealed that he went for Maja because of his potential and expects him to follow in the footsteps of summer arrivals Antonee Robinson, Tosin Adarabioyo and Ruben Loftus-Cheek.

Asked at Tuesday’s press conference if Maja is set to come straight in and get the goals, Parker answered: “Why? It’s just I’ve not seen him at the moment. We’ll have to work it out.

“I’ve brought Josh to the football club because of his big potential and the work we’ve done with Tosin, Antonee Robinson, Loftus-Cheek – all of these players have done fantastically well and I think Josh fits into the same bracket.”

Maja is expected to link up with his new teammates on Tuesday, a day before they face off with Leicester City at Craven Cottage.
“I think we need that in that area because we’re light in numbers,” Parker said.
“We have one recognised striker at our football club in Alek Aleksandar and he’s been fantastic for us. Ivan Cavaleiro has been playing as a nine for us as well and has done remarkably well.

“I think, like all deadline days, they do bring a little bit of drama and I’m certainly very pleased with the signing of Josh. I think he probably falls into the sort of business we’ve done this year in terms of young talent, big potential, someone we can develop.

“He’s a very good finisher and I think it’s clear we need to try and strengthen in that area. We’ve got Mitrovic in our squad but other than that, no real recognised centre-forwards, so I’m very pleased with that.
“Hopefully Josh comes in and we can really push him on. He scored a lot of goals at Sunderland, so that’s the main thing,” Parker said.

Parker expects Maja to seize the massive opportunity to prove himself in the Premier League.
Having brought in young players like Ademola Lookman and Antonee Robinson at the start of the season, Parker believes Maja will take his chance “with both hands”.

“It’s a tough market for many reasons in terms of us as a football club, where we are, where we sit and the commitment already made to this squad,” Parker said.

“While we all recognise what we need and what we would have wanted, it’s difficult. Josh’s qualities and what he has, there is a step he has to make, but it’s a step I feel he can make, definitely.
“He has good habits in and around the box. It’s a massive opportunity for him, so I expect he’ll grab it with both hands.

“He’ll come into our environment and history tells me we’ve signed players this season who are young, hungry and want to develop.

“So far, they’ve done pretty well. I don’t see why Josh would be any different.”
Parker believes Maja can help address Fulham’s scoring problems, with the club, who lie seven points from safety, having managed just 17 goals in their 20 Premier League matches this season.
They have scored just six times in their last 10 league games.

“I see him as a clinical finisher, good movement in and around the box,” Parker said of Maja.
“Finishing wise, with both feet, I see him clinical in those moments. I see him occupying between the posts really.
“You can play him off the sides a bit, but I mainly see him as a guy who is going to be on the end of things. Like a Mitrovic that we have, he is a guy you want to be finishing off any play.”

He had scored 16 goals for Sunderland in League One and made the move to France having turned down the offer of a new contract with his deal up the following summer.

Maja has scored nine goals in 20 Ligue 1 starts since arriving in France.
Fulham and Bordeaux have already conducted transfer business with each other in the current window, with midfielder Jean Michael Seri recently joining the French club on loan for the rest of the season.
The 22-year-old’s first play for the Super Eagles in a grade A international friendly against Ukraine in September 2019.

He made his debut as a substitute in the game and since then there is no turning back as he had shown he has the talent to play for the Super Eagles.

“Of course, playing in one of Europe’s top five leagues and performing well will improve my chances of international selection,” Maja told BBC Sport Africa.
“The Nigerian team has always had quality, but now there are a lot of young talents playing, so the future is very bright for us.”

The choice to play for Nigeria rather than try to represent England, the country of his birth, seems to have been an easy one.
“Playing on an international stage was a dream of mine. To represent my country and make my family proud,” he insisted.

“I’m familiar with my roots. I went to Nigeria a few times when I was young, and in the next few years I’ll be going again.”
The promising young striker says that Nigerian legend Jay-Jay Okocha was one of his idols growing up.
“Okocha was a big icon and an example to many players, even outside of Nigeria,” says Maja.
“He had lots of qualities and performed well in the Premier League.”

Indeed, there seem to be some hints of this influence in Maja’s game.
He often drops from his position as a striker into the attacking midfield positions where Okocha once wowed fans, linking up play before getting on the end of moves to score.

Maja can also finish with either foot as well as his head and has the ability to pass accurately over any distance.
Maja was born in Lewisham back in 1998 when Gus Poyet, Gianluca Vialli and Roberto di Matteo were still wearing the famous blue shirt, certainly ticks a lot of boxes for this new-look Chelsea side.
He is young, home-grown, and prodigiously talented.