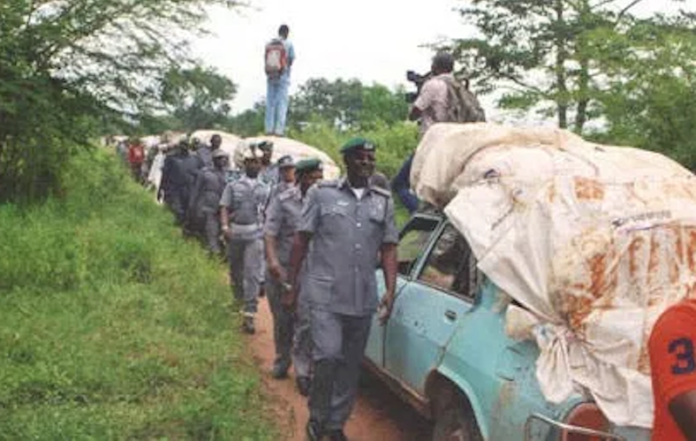 The Nigeria Customs Service (NSC), Federal Operations Unit (FOU), Zone ‘A’ Ikeja, Lagos has alleged that hoodlums suspected to be smugglers attacked and wounded three of its officers.
The command in a statement said the officers, who were on anti-smuggling patrol on the Lagos-Abeokuta Expressway, were attacked and wounded at dawn.

The Public Relations Officer, Zone A, Theophilus Duniya, in the statement said three customs officer and a military officer attached to the patrol team sustained various degrees of bullet wounds.

He stated that the officers had intercepted six vehicles laden with smuggled rice before the hoodlums attacked them.
According to him, “Some officers of Federal Operations Unit Zone ‘A’ of Nigeria Customs Service, suffered an attack by hoodlums working with smugglers.

“At about 0600 hours of Tuesday 2nd February, 2021. Officers of the Unit, while carrying out their statutory duty of enforcing anti-smuggling laws; acted on intelligence and intercepted six vehicles laden with foreign parboiled rice at Abeokuta Express Way.

“Upon the interception, some armed hoodlums working in support of smugglers swiftly mobilised themselves and attacked our officers in their bid to prevent the seizure from being taken away. However, in the cross fire that ensued, our operatives overpowered them and were able to evacuate three out of the intercepted vehicles to the warehouse.”

He explained further: “Three Customs officers and a soldier sustained some bullet injuries from the attack. The wounded officers are currently receiving treatment at our medical facility, while further investigation into bringing the perpetrators of the attack to book has commenced.”

Duniya, however, stated that the acting Customs Area Controller, Compt. Usman Yahaya, has warned smugglers against attacking officers of law on duty of protecting the nation’s economy.
He said the CAC has warned youths to desist from being used by economic saboteurs to confront operatives of the service from carrying out their lawful duties.

He said: “The Ag. Controller is very concerned about the injuries inflicted on the officers, which were totally avoidable if only the youths were patriotic enough to know that the officers were just performing their lawful duties. He also cautioned the youths to reject being used by economic saboteurs to confront operatives of the Service from carrying out their lawful duties.

“DC Usman Yahaya, while thanking the law abiding citizens for supporting our operations, also warned people with criminal intentions to immediately desist from such because officers/men of the Unit are well mobilized, backed up by the extant laws and shall remain resolute at enforcing the laws without fear of intimidation,” he said.