Gunmen yesterday abducted about 26 people along the Kaduna-Kachia road and Kugo village, in Chikun Local Government Area of Kaduna State. While 21 of the victims were, reportedly, kidnaped along the Kaduna-Kachia road, five women were abducted at Kugo village, near Godani Railway Station, Chikun Local Government Area, on their way to the farm. Both incidents occurred Friday.

However, in Borno State, about 246 suspected Boko Haram members, reportedly, laid down their arms and surrendered as part of the current efforts at ceasefire.
The counsellor representing Zonkwa ward in Zango Kataf Local Government Area of the state, Luka Bako, was among those abducted along the Kaduna-Kachia road, but he miraculously escaped.

Speaking in a telephone interview with THISDAY, Saturday, Bako said he was travelling from Zonkwa to Kaduna in a Sharon commercial bus when the bandits struck. He said the incident occurred on Friday around 5pm after Doka village, Kajuru Local Government Area.

According to him, “We were travelling in a Sharon commercial bus from Zonkwa to Kaduna. We were eight in the bus. As we approached the mango plantation after Doka, we saw two people in military camouflage carrying AK47 riffles standing on the road.
“Initially, we thought they were soldiers, but when we got closer we realised that their dressing was not complete. But it was too late for us to turn back.

“They stopped us and asked us where we were coming from and where we were going. They asked the driver to open the booth of the vehicle. As the driver went to open the booth, they ordered the eight of us in the bus to come down. Four other vehicles carrying passengers were also stopped. They ordered everybody into the bush. As we entered the bush, other bandits came out from their hideouts to guide us into the bush.

“A driver that carried passengers from Jos and i miraculously escaped.”
Bako said based on his calculation, 21 people might have been abducted.
“I am not certain,” he stated. “They could be more or less. But based on my calculation, 21 people were abducted.” He said he had since reported the incident to the Kajuru Divisional Police Station.
At Kugo village, five women were also abducted on their way to the farm on Friday. A resident of the village said by telephone that the women were going to harvest yam.

When contacted, spokesman of the Kaduna State police command, Mohammed Jalige, said he was not aware of the incident along the Kaduna-Kachia road, but promised to do his findings and get back.
At the time of filing this report, he was yet to respond..

Meanwhile, security agencies have captured three suspected bandits and rescued two kidnap victims. This was disclosed in a statement by the Commissioner for Internal Security and Home Affairs, Samuel Aruwan yesterday. According to the statement, “Troops under the auspices of Operation Thunder Strike rescued two kidnapped women, close to Gadanin Gwari, Gwagwada District of Chikun Local Government Area.”
Aruwan said operational feedback to the state government indicated “the women were suddenly abducted as they made their way to their farm.”

He said, “The troops on patrol tracked down the criminals and engaged them in a firefight, forcing them to abandon their captives and run for their lives. After securing the women, the troops pursued the bandits, destroying many bandit camps along the way.”

The statement said the bandits were eventually trapped in Gajina settlement in Chikun Local Government Area, adding that three suspected “kidnappers were apprehended and are now in custody, while the rescued women have returned to their homes.”
The statement also explained that police personnel rescued two persons, who were abducted at Kurmin Idon axis along Kaduna-Kachia Road in Kajuru Local Government Area.

The commissioner said, “Governor Nasir El-Rufai expressed his satisfaction with the reports, and commended the troops and personnel for their pro-active efforts in rescuing the victims and arresting the three bandits.
“He tasked them to ensure detailed investigations, and prosecution of the arrested culprits. Vigorous patrols will continue in the general area.”

In Borno, one of the leaders of the Civilian JTF, a security support group, Baba Shehu Abdul-Gani, who spoke to THISDAY, confirmed that the 246 militants surrendered at different towns in the state.
He said they surrendered to both the Army and members of his group.

“Two days ago, 100 members of Boko Haram surrendered in Bama, another 100 in Gwoza and 46 in Ngala” Abdul-Gani said, noting that all the 246 have been handed to the Army.
On the Chibok girls, who were said to have escaped from captivity after they were kidnapped, Abdul-Gani said he did not have any information to that effect.

General Officer Commanding, 7 Division of the Nigerian Army, Maiduguri, Brig. Gen. Abdul Khalifa Ibrahim, said some insurgents and their wives had equally surrendered to them.
He said, “As GOC of 7 Division, I have no information of any escaped Chibok girls and I should know if any. But we are still pressing on, they will come out. However, some Boko haram criminals and their wives are surrendering. Some of the criminals and their families came out from Bank junction general area and are being investigated.”

When contacted about the case of the reported fresh escape at Chibok, the spokesman of Borno State Governor (Prof. Babagana Zulum, said there was “no official information yet from our end.” He noted, “The military normally handles Chibok girls issue. They present them to the presidency.”

When THISDAY further contacted the spokesman of the Nigerian Army, Col. Sagir Musa, said it was directed to the Defence Headquarters, because issues like that were handled by Defence, not the military.
A message sent to the spokesman of the Defence Headquarters, Maj. Gen. John Enenche asking about the escape of the Chibok girls was not replied to at the time of filing this report. 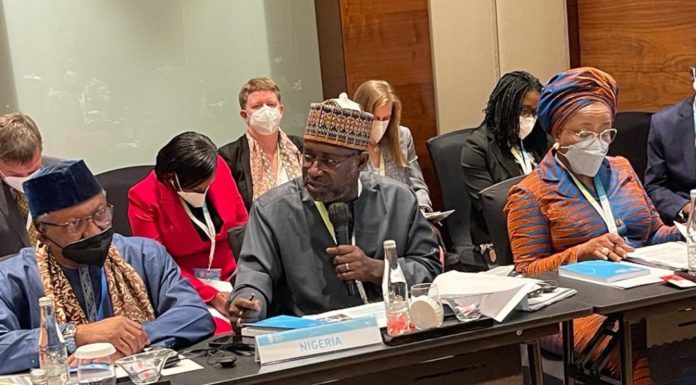 FG, others working to increase access to water, sanitation-Adamu