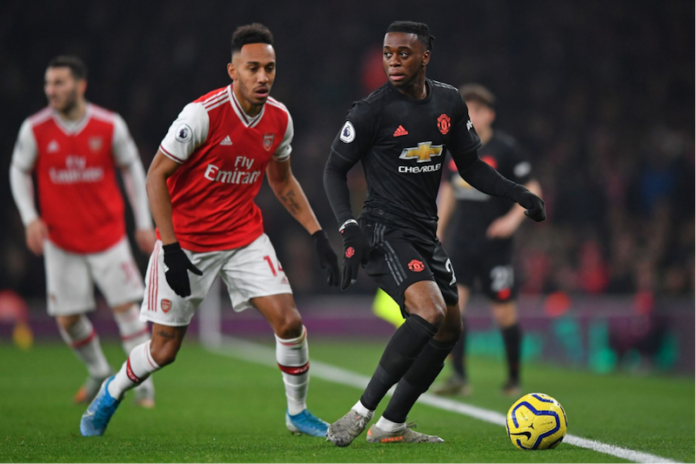 Manchester United may have lost four in 19 Premier League matches, but their away record has been unprecedented, with seven wins and two draws in nine games. The Ole Gunnar Solskjear side boast of the best away record in the current season. The Red Devils away form will however be facing a litmus test today as they visit in-form Arsenal at the Emirate Stadium. While the Gunners are coming into the game boosted by their 3-1 away victory against Southampton on Tuesday, United’s title ambition suffered a setback midweek, no thanks to their 2-1 loss at home to Sheffield United and will need an extra motivation to get the result against Mikel Arteta’s men

One of the defining rivalries of the Premier League era enters its latest chapter this afternoon when Arsenal welcome Manchester United to the Emirates Stadium.
Seven places and 10 points separate the two sides in the log, but it is ninth-placed Arsenal who go into the game off the back of a victory while second-placed Manchester United were left reeling by defeat to Sheffield United last time out.

Showdowns between these two once-great rivals may not be what they used to be when they went a long way towards deciding the destination of the Premier League title, but they still carry an extra edge.
Two former players who know all about the history of this fixture are now in the dugouts, and they will no doubt be demanding that the current crop do their predecessors justice.

Man United boss Ole Gunnar Solskjaer will be demanding an immediate reaction from his side after they slumped to a 2-1 home defeat at the hands of Sheffield United on Wednesday night, but for Arsenal’s Mikel Arteta the message will be to continue where they left off last time out.
The Gunners swiftly avenged their FA Cup exit at the hands of Southampton by beating them in the Premier League, again at St Mary’s, just three days later, with talented teenager Bukayo Saka further enhancing his burgeoning reputation with another goal and assist.

That result lifted Arsenal up to ninth in the standings and continued a resurgence which has catapulted them up towards the top of the form table, with only Manchester City having picked up more points over the last six games.
The scale of the turnaround has been stark; Arsenal have picked up 16 points from the last 18 on offer, more than doubling both their points tally and their goal tally in the process.

Arteta’s men won just four of their first 14 league games this season but have now won five of their last six, while they netted 12 goals in those opening 14 games – whereas the last six outings have yielded 16 goals.
Of course, sitting ninth in the table after 20 games is still a disappointing return for Arsenal, but they at least appear to now be back on the right track, with a growing identity to go with their improving results.

Certainly, the pressure on Arteta’s shoulders has eased, and both he and his counterpart in this match, Solskjaer, will be thankful to their clubs for keeping faith in a position where Chelsea did not with Frank Lampard.
In addition to an improvement going forward, inspired by Saka and ably assisted by Alexandre Lacazette’s return to form, Arsenal have also been better defensively, with only Southampton having scored against them in their last seven outings across all competitions.

At home, Arsenal have kept three clean sheets in a row – as many as they had managed in their previous 19 games at the Emirates – and Saturday offers them the opportunity to extend that to four on the bounce for the first time since April 2019 – a run which, incidentally, included victory over Manchester United.
There could also be a small slice of history on offer for Arteta as he looks to become the first ever Arsenal boss to win each of his first three league games against Man United, while that is a feat only three managers of any club have ever achieved in the Premier League era.
Such a result would be another dent in the title hopes which have grown at Man United this season, but the Red Devils are chasing history themselves as they travel to North London.

A win or a draw would see Solskjaer’s side make it 18 consecutive top-flight away games unbeaten stretching back more than a year, something Man United have never managed before in their illustrious history.
The 20-time English champions have won more points and scored more goals away from home than any other Premier League side this season, so a trip to an Arsenal team with a distinctly average home record should not faze them.

However, their confidence will have no doubt taken a hit during their 2-1 defeat to bottom-of-the-table Sheffield United in midweek, as the Blades upset all the odds to deal a reality check to the title hopefuls.
Whereas Man United’s away form has been peerless so far, the loss to Sheffield United was their fourth at home already this term – their most in a single season since the David Moyes campaign of 2013-14.

The Red Devils’ uncanny habit of coming from behind to win – something they have achieved seven times already this season, abandoned them on Wednesday, denying them the chance to regain top spot from local rivals Manchester City.
The result also ended a 13-match unbeaten streak in the Premier League, which incidentally stretched back to the reverse of this fixture, which Arsenal won 1-0 at Old Trafford on November 1.

Pierre-Emerick Aubameyang settled that game from the penalty spot, but Man United have not lost back-to-back league games for more than a year now and will know that a repeat of that result today would put the title race firmly into the hands of an ominous-looking Man City.