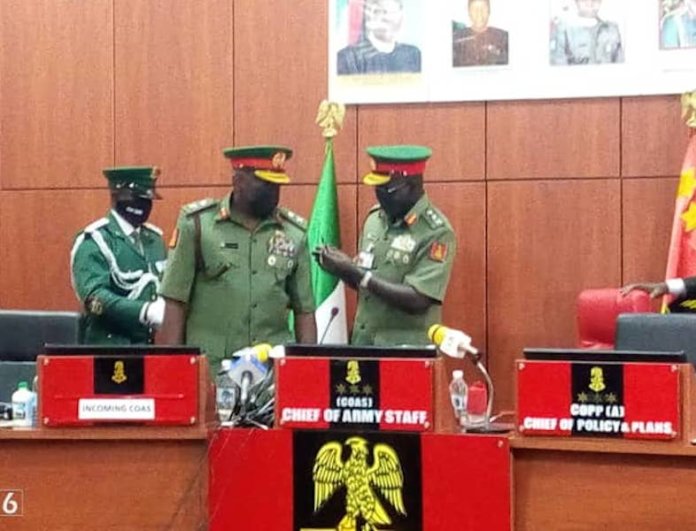 Former Chief of Army Staff, Lt. Gen. Tukur Buratai, yesterday handed over command to the new Army Chief, Maj. Gen. Ibrahim Attahiru.
Speaking at the handing over ceremony at the Nigerian Army Headquarters, Abuja, Buratai said he was nearly retired by former President Olusegun Obasanjo, 21 years ago at the rank of major.

He described his attainment of the rank of lieutenant general and Chief of Army Staff as historic.
He said the Army would never remain the same after his exit.
“Former President Olusegun Obasanjo almost retired me 21 years ago when I was a Major. My retirement after 40 years of service is historic, hence calls for gratitude,” he said.

He also urged Attahiru to remember him for three things notably improved professionalism of the Nigerian army, improved responsiveness of the army in the area of training administration and logistics needs and responsiveness to Nigeria’s democratic imperatives.

He commended the principal staff officers, corps commanders, commandants and directors for their cooperation during his time as the army chief.
He also appreciated all the troops serving in all operations both home and abroad most especially the operation Lafiya Dole, Sahel Sanity, Delta Safe among others.

Buratai said as a COAS he was proud to have defended the nation’s democracy and called on officers and men of the Nigerian army to make it their duty to defend and to protect democracy.

In his response, the new COAS pledged to sustain the giant strides of the Nigerian Army under Buratai, adding that he considered himself lucky to have been given opportunity to succeed Buratai.
Earlier, the Chief of Policy and Plans, Lt. Gen. Lamidi Adeosun, said the Buratai came, saw and conquered, adding that working with Buratai was a rewarding experience.

Adeosun, while extolling the virtues of Buratai said he had achieved so much for Nigerian army in terms of operational efficiency, personnel welfare and establishment of new units and formations.

The new Chief of Army Staff, Major General Ibrahim Attahiru, solicited the support of soldiers and officers to reposition the Nigerian Army.
He thanked President Muhammadu Buhari for finding him worthy, adding he counted himself lucky to be chosen as army chief.