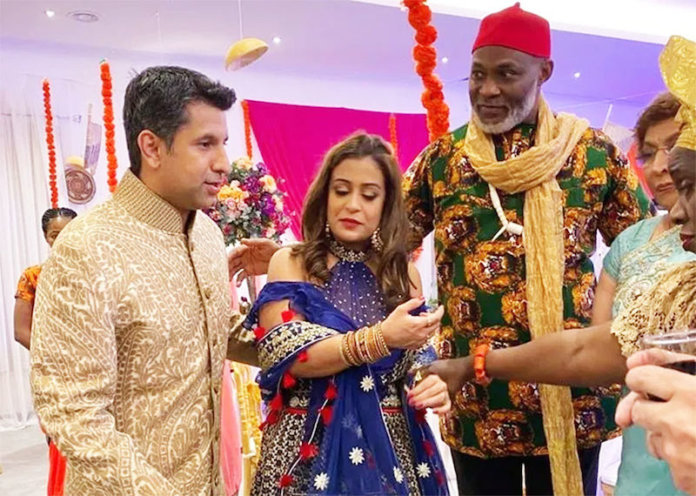 Upcoming movie, Namaste Wahala, a cross-cultural spectacle of Indian and Nigerian traditions, is met with so much fever following a recent mention of its release, even without a specific date. Ferdinand Ekechukwu reports

On what platform will Namaste Wahala, the film debut of Hamisha Daryani Ahuja, come through when it is finally released this year? The highly anticipated Bollywood/Nollywood collaboration was initially scheduled for cinema release last year but was pushed back twice; first in April and then in October 2020 due to the Covid-19 pandemic. Just of recent, the businesswoman turned filmmaker, Ahuja, stated in a post that the much-awaited movie that brings both film industry giants (Bollywood and Nollywood) together will be released soon for the world to see.

“A lot of you have been asking where Namaste Wahala – a Bollywood/Nollywood love story is. A movie produced and directed by yours truly. The experience has been magical and I am happy to say that this baby is getting a chance to see the world or more accurately be seen by the world. That’s all I can say for now, but this is a reminder for everyone out there. Dreams do Come True! Can’t wait to share this magic with you,” Ahuja wrote on her Instagram page.

While Ahuja’s message didn’t say much, other than it will be released this year, no one knows when exactly this production will be shown to the world, and lovers of Nigerian/Indian culture are eagerly looking forward to more details on when and where to catch this cross-cultural spectacle, starring Ini Dima-Okoji and India’s Ruslaan Mumtaz in the lead roles. Alongside other big names like RMD, Joke Silva, singer MI Abaga and Segal Sujata. Touching various genres: romance, comedy, drama, the plot is about a joint Nigerian-Indian wedding.

And given how both Indians and Nigerians are known for beautiful, extravagant weddings, it’s easy to see why this beautiful mix has been met with so much fever.

“Namaste Wahala” which loosely translates to “Hello trouble” is filmed mostly in English with a mix of Hindi and pidgin language. Ahuja has lived in Nigeria since she was a child and says her experience in Africa’s most populous country inspired her debut effort. “I am Indian but I have lived in Nigeria my whole life. Everyone loves Bollywood and Nollywood, so I thought ‘how is it that no one has done a love story between the two?’ she said earlier in an interview.

Ahuja had also explained that the feature film examines her cultural experiences living in India and Nigeria. “Namaste Wahala is a story a lot of laughter and a few tears about love and family. This project is very close to my heart as it’s my first movie and it’s also the first movie ever that brings together Nollywood and Bollywood. I am grateful to all the extraordinary cast and crew that helped me make this project a reality. With nothing but a passion for film, I embarked on a journey to make a feature film that is a melting pot of my cultural experiences between India and Nigeria. The moment I made this decision, I knew that it would require that I give it focused energy in faith, and watch it all manifest.”

The film is widely believed to be the first movie collaboration between Nollywood and Bollywood. However, it’s not the first time the two film industries have joined forces. The 2017 film J.U.D.E. is credited as being the first Nollywood-Bollywood joint production, according to Shadow & Act. It only makes sense that two of the world’s biggest film industries would unite once again, to give its lovers an exciting cross-cultural production.