Video: Tweeting from the Gym, Tinubu Says ‘I’m Strong, Healthy, Ready to Serve from Day One’ 46 mins ago 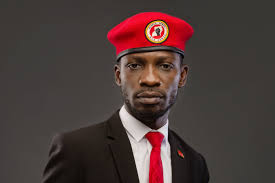 The blame he totally laid at the door step of Yoweri Museveni as symptomatic of his long history of tyranny in Uganda. In short Bobi is crying out to the world that should in case the election is marred by mass vote rigging and election irregularities as he had charged, Museveni supervised the process by ensuring there were no external umpires to serve as jury over the election.

I also read the synopsis of an article written by Bobi Wine titled, “The West Helped Cripple Uganda”. The two submissions from Bobi seem separate like parallel lines and contradictory. It’s a double speak that mirrors the praxis of every aspirant who intends to unseat an incumbent.

You groaned that the West was complicit in crippling Uganda but you also want the West to serve as jury over your election. This is how often we set ourselves up as stooges for the West to toss around like coins.

What Bobi is unaware of is that if per adventure Museveni is in the bad books of the West and through foreign powers he’s unseated and Bobi gets installed, it’s another race towards the enchainment of Ugandans, for he who pays the piper dictates the tune.
This is an age-long Western playbook aptly chronicled in the Yoruba timeless thriller Saworoide. Lapite who cheated the king making process of the land of Jogbo ascended the throne only to find out that cheating the process came with a caveat which is that he would die if he ever listens to the Saworoide being played and also the consequences of sharing the kingship with someone else.

Lapite ruled the people of Jogbo with iron fist and as symptomatic of many despots, he merchandised the resources of the land of Jogbo for personal gains. The people of Jogbo being aware of Lapite’s faulty ascendance to the throne stole the Adé ide (brass crown) knowing that if the crown is absent from the palace for 15 days Lapite dies.

Lapite sought the assistance of Ogagun Lagata, a military officer to recover the Adé ide. Lagata brought back the brass crown but killed Lapite to ascend the throne and became worse than Lapite.

Museveni has been the President of Uganda since 1986, I can tell you for free that if by sheer luck Bobi becomes the President of Uganda, he would be worse than Museveni. It is always customary of political wannabes to leverage on the hopelessness of people and incumbent tyrants to offer a glimmer of hope only to get to the position and become worse than what they condemned.
––Kehinde Oluwatosin, kehindeobabatunde@gmail.com