As a result of the threats that have been made by certain persons against Matthew Hassan Kukah, the Catholic Bishop of Sokoto Diocese, I find it necessary to refresh the memories of the belligerents, who sadly, are at the highest levels of certain faiths.
Their recent comments have shown that they do not know their history. If they did know their history, they would not have taken the approach that they took.

Much of the inability of persons who practice the three Abrahamic faiths of Judaism, Christianity and Islam to coexist is due to the fact that many of the adherents of these faiths do not really understand their religion and its history.

Conflict is more likely between Muslims and Jews or Christians, than between Christians and Jews. And sadly, much of this conflict is due to politics, rather than religion. However, many adherents do not know that, because it is easy for political leaders to misuse religion in furtherance of their political agenda.

And when this happens, many religionists are often unable to see that they are being manipulated. They just flow with the motion of the manufactured ocean.
The truth is that, whether we like it or not, each of these religions has a lot in common. And while I do not believe in Islam or Prophet Mohammed, or that Muslims and Christians worship the same God, I do know that they have very intertwined origins.

For example, almost every name that is considered holy in Islam, with the exception of the names Mohammed, Hassan, Abū Bakr (two names, which many Muslims join together to make Abubakar), and a few others, are of Jewish or Christian origins. Below are some examples.

And Maryam (the only woman mentioned by name in the Quran) is the Arabic version of Mary. (Other women were referenced, but not by name). She has a whole chapter named after her in the Quran (āyāt Mariam).
So, why does the Quran make reference to Jewish and Christian saints and prophets? I do not know.

However, what I do know is that one of the first persons prophet Mohammed consulted after his angelic visitation, was a man named Waraqah ibn Nawfal. Waraqah was not only a Christian, he was also a priest, who had an Arabic version of the Scriptures (The Bible and other Jewish books). He was also well versed in Hebrew script.

Umm al-muʾminīn (the mother of the faithful) Aisha, testified that Waraqah assured prophet Mohammed that the angel who spoke to him is the same angel that spoke to Moses.

According to Islamic sources, Prophet Mohammed himself could not read or write. However, with the fact that Waraqah identified the source of his revelation as the same with that of Moses, which also agrees with the Quran, there was bound to be an interplay between Judaism, seeing as Moses was the founding prophet of Judaism (not Abraham).

But that is not all. Culturally, there are a lot of similarities between Muslims and the oldest Christian nation on Earth, Ethiopia. This is a nation I have been to nine times, and each time I visit, there is something different to learn.

In the Quran, modern-day Ethiopia is known as Saba.
When you go to Ethiopia, you will be amazed, or perhaps even shocked, at the similarities between Ethiopian Orthodox Christianity and Islam. Yet, the Ethiopians have been worshiping in their unique manner for centuries BEFORE Mohammed was born. How come the similarities? Who learned from who? If you hate facts and are a religious extremist, please stop reading NOW!

The similarities between Ethiopian Orthodox Christianity and Islam arose because when the Quraysh clan of Mecca persecuted Prophet Mohammed and the first Muslims, the Muslims fled to Ethiopia where the Ethiopian Christians gave them asylum and militarily protected them from the Quraysh.

When the Quraysh sent emissaries to appeal to the Negus (Christian King of Abyssinia, as Ethiopia was then known) to hand over the Muslims to the Meccans, the Negus refused. They were surprised, because they had brought expensive gifts as presents (bribes) for him. The Negus had read from Ayat Maryam in the Quran, and according to him, the only major difference between Islam and Christianity is that the Muslims viewed Christ as a Prophet, not as the Son of God, which He is according to the articles of the Christian faith.

The first Muslims stayed in Ethiopia. While there, they learnt from their African hosts.
‪Now, let me correct a misconception many people have. The first Hijra of Muslims was NOT to Medina. Seven years before Medina, the followers of Prophet Mohammed (SAW) were given asylum from enemies by Christians in ancient Ethiopia.‬‬
Situate this with the threats made by certain persons against Bishop Kukah. Again, I ask if they know their own history.

Now, I urge you to either visit Ethiopia, or research how Ethiopian Orthodox Christians dress, how they worship and how they commune with each other.
The whole idea of what we call Christian worship in Europe, America, and in colonised South American, Asian and African nations, like Nigeria, is alien, and often repugnant to Ethiopian Christians. Believe it or not, if an Ethiopian becomes a Pentecostal modernist Christian, maybe because of their sojourn abroad, their family often rejects them and cuts them off.

In Ethiopian Orthodox Tewahedo Christianity, men and women do not mingle in the temple. They sit separately. They enter the church via separate entrances. Whilst in church, the women must cover all parts of their bodies, and only their faces will be visible. Their hair must not be visible.

Sound familiar?
When I saw them praying at the 1000-year-old rock hewn church of Lalibela, they prayed like Muslims, or so I thought. They had eyes opened, but looking down, or ahead, with arms outstretched. I asked the Liqa kähnät (officiating priest) why they prayed like Muslims, and the man looked at me and calmly told me that they have been praying in this manner, undisturbed, for 2000 years, ever since the Ethiopian eunuch of Acts 8:26-39 brought the Christian faith from Israel to the ancient kingdom of Aksum.

Mind you, this was over 600 years before Prophet Mohammed was born.
You will never find Ethiopian Christians contravening 1 Corinthians 14:34, as is now very common in Western Christendom and African Pentecostalism.
They do not modernise their brand of Christianity. They do not adjust Scripture to suit the times. They adjust the times to suit Scripture.

In fact, more Muslims bear the Name of Christ, than Christians. When you see a Muslim bearing Isa, he is bearing the Name of the Christian Messiah of the world, Yeshua, who some also call JESUS.
Let me end by saying that Muslims who know their history will never harbour animosity towards Christians. True Christians have always shown love to others. And this continues till today, and in proof, I will quote the Muslim Governor of Nigeria’s Borno state, Professor Babagana Zulum, who said (and this is a quote):

“In the midst of challenges with the Boko Haram insurgency, countries from the west have shown more concern for the plight of Borno people than rich Arab nations whose people share similarity of religion and culture with the majority of Borno citizens.
We have made several efforts, written and visited embassies of Arab countries, especially those that are rich and not dealing with crises, but obviously, majority of the Arabs do not care about our situation, neither do they support us.”

I hope those who threatened Kukah have read the above words from Governor Zulum.
Reno’s Nuggets
Dear church boy,
Better to marry a beautiful wife who can’t pray, as long as she shares your faith. Don’t let anyone fool you into marrying a prayer Queen you are not attracted to. You can teach your wife how to pray. But you can’t teach her how to be beautiful! If she has both, then all the better. Marriage is not a sacrifice. It is a blessing. Don’t sacrifice your physical needs because you want to be a good church boy. Take a while to look at the wives of prominent pastors. When you are happy in the bedroom, you are likelier to be powerful on the pulpit 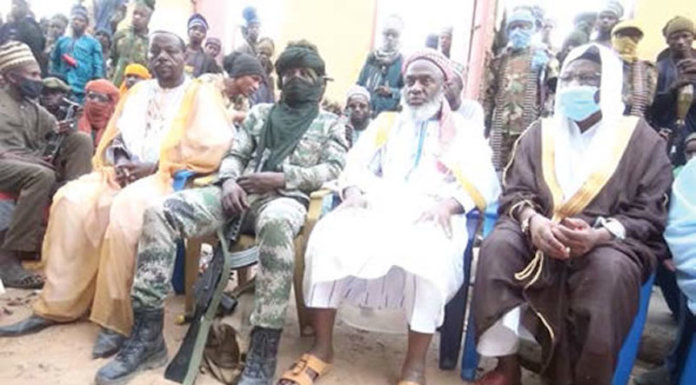