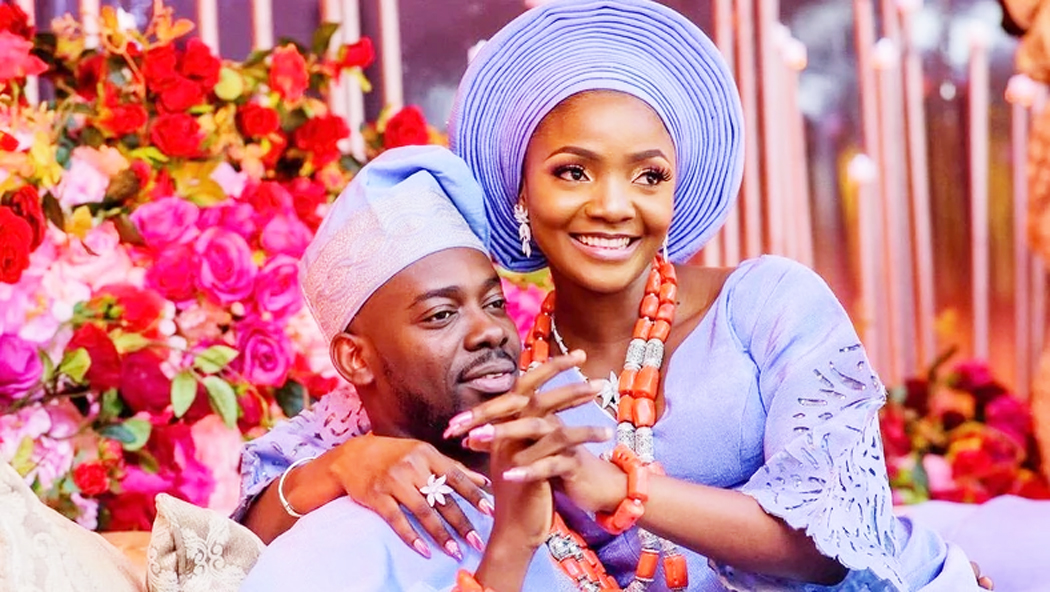 The pair tied the knot at a low-key ceremony in January 2019 and welcomed their first child together in June 2020. On their wedding anniversary last week, the couple took to their respective Instagram pages last Wednesday to pen lovely messages to each other. In his post, Adekunle Gold expressed his love for Simi, noting that she has been a blessing to the family since they got married. He further recounted their beautiful grass to grace journey.

Adekunle wrote: “I look back to the first day I met you. I had just left the office, so excited that you had finally given me the audience to see you. This local boy put on a white byc vest and a pair of new lilac pants bought specially for the occasion; I even made sure I was there earlier so I had front row seats,” he wrote. “I watched you talk, sing, laugh and dance and Omo I knew that very day that I wanted to be in your life. I knew that day that I wanted my forever to be you. Here we are, all three of us, talking, dancing, singing, laughing, and doing this called life together. With you, I have been blessed with so much, so much, it’s too much to count. I love you Simi. Forever your steward.”

On her part, the ‘Duduke’ crooner showered praises on her husband, describing him as a man of amazing personality. “2 years. Well, 2 years on government paper and 7 years since I gree for you, you lucky man, through a pregnancy. With a baby, we’re both unashamedly obsessed with. Through a pandemic. And it’s still you. I’ve never had to wonder if you’re in my corner. You’re still the best man I know. You should have been your own best man (don’t leave me). One of my favorite things about you is that you’re a really, really good person. I like you a lot. I’m so proud to know you and be your wife. I pray that God continues to be the foundation of our marriage and home. I love you Kunle Kosoko. Now, forever and one extra day, and then another, and then another, and then another, ati bobo lo…Happy Anniversary Baby.”

Adekunle Gold and Simi’s relationship has been an item of intense interest to the public after the two artistes commenced their careers. Both singers were together for a very long time even before their career flight. At the beginning of their career, the singers kept their brands separate and were hardly photographed together. Given the spotlight on celebrity couples, this decision paid well for Simi and her boo as they were able to build their careers outside the spotlight. The longtime lovers, who have been together for almost a decade, tried their best to keep their love life private, their fans waited impatiently for them to go public as a couple.

Despite all that was seen, said, suggested, and guessed about them, there was never a confirmation from the pair, and not even a straight denial. Apart from the chemistry and all the affectionate, almost affectionate embraces from them during their many joint performances, not much could be said about their relationship. Until an event of Sunday December 8, 2018 confirmed their status as Simi told Adekunle Gold, “your love is overwhelming” after they shared a kiss on stage at Balmoral Convention Centre, Federal Palace Hotel, Victoria Island during her concert tagged ”Simi Live in Lagos”.

It then followed with a secret engagement party attended by close knit friends and family members of the couple. These two further threw a surprise in 2019 when they got married in one of the most private celebrity wedding in modern times. The couple had their traditional weddings on Wednesday, January 9, 2019, at Victoria Island. Their marriage was witnessed by a private audience of about 300 close family members, close friends and industry colleagues. They went on to have their white wedding at the popular Ilashe beach on Thursday, January 10, 2019.

Unlike the traditional wedding which had a larger turnout, the white wedding was attended by a select 300 guests. Adekunle Gold had in an interview revealed that he would love to tie the knot at the beach. Hence the beach wedding didn’t come as a surprise to many as the clip of the interview surfaced online.