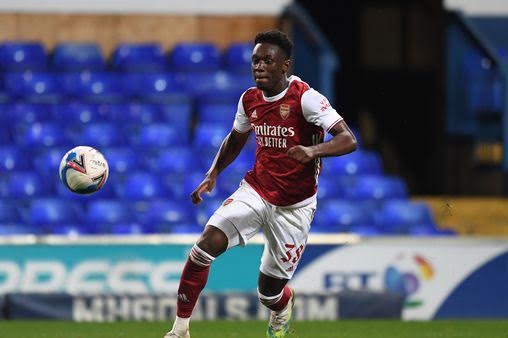 Once widely recognised for nurturing young talents and turning them into first-team stars, Arsenal is however on the verge of losing one of their priced youngsters-Folarin Balogun, who Manager Mikel Arteta once described as having Arsenal DNA in his blood. And he could even go for free. His contract expires this summer and has refused to put pen to paper for a contract renewal, as a result of first team action not coming by

Arsenal were once widely recognised for nurturing young talent and turning them into first-team stars.
Aaron Ramsey, Jack Wilshere, Cesc Fabregas and Kieran Gibbs are just some of the starlets who became regulars under former boss Arsene Wenger.
This stance has altered somewhat in recent years though, with the Gunners getting out the cheque book to seal deals for proven talents such as Pierre-Emerick Aubameyang, Alexandre Lacazette, Thomas Partey and Bernd Leno.

Bukayo Saka, meanwhile, has been a shining light for the Gunners amid a difficult first half of the 2020/21 campaign and deservedly received senior international recognition with England when he featured against Wales last October.
As the north London side build towards a brighter future under Mikel Arteta’s stewardship, they will be looking to bring some more youngsters into the senior set-up.
However, it doesn’t appear as though highly-rated academy striker Folarin Balogun will be part of that process.

The 19-year-old forward is close to signing a pre-contract agreement with a foreign club.
The Gunners want Balogun to stay at the Emirates, but limited progress regarding talks over a new deal at the club and a lack of playing time has seen the youngster consider his long-term options.
Balogun, who made his senior bow against Dundalk in the Europa League in October 2020, is out of contract at the end of the season.

Speaking ahead of last Saturday’s FA Cup third round tie against Newcastle, Arteta insisted the player wants to remain at the club and suggested outside influences are hampering their chances of retaining the youngster.

“I’m telling you that we are doing everything we can to keep him here.
“Hopefully from the other part they are doing the same and in the same interest, which is the player’s interest which is to stay at the football club and be successful with us.”
Balogun has not been short of interested suitors, with Championship promotion chasers Brentford seeing a £5million bid turned down this time last year.

It seems inexcusable that the Gunners should let go of yet another young star, especially as they’ve lost four exciting starlets over the course of the previous four campaigns.
With the likes of Serge Gnabry, Ismael Bennacer, Donyell Malen and Jeff Reine-Adelaide all leaving Emirates to becoming big stars in foreign European clubs.

According to a report, Balogun has agreed to join Bundesliga side, RB Leipzig.
Highly-thought of across the continent, the 19-year-old striker had his first dabble with senior football this season, making an immediate impact. He showed promise in his 16-minute cameo against Dundalk, then followed it up with a goal mere moments after coming off the bench against Molde.
Impressing in the Europa League, he maintained his streak of brief outings in the group stages, notching another goal and assist, to prompt widespread clamour for him to sign a new contract.

Being in the position in the first place was unacceptable from Arsenal’s point of view, as they had a young striker working his way up through the youth setups whose future hadn’t been sorted.

Unwilling to commit to the club without being granted more senior minutes – something Arteta can’t do at this moment as even another youngster, Eddie Nketiah hasn’t played for a month in a team that have found form – the insistence from the club that he has a long-term and a route into the senior team aren’t enough for the striker.

Now with 15 proposals on the table from a variety of clubs that he’s allowed to sign pre-contract agreements with, it appears he’s made up his mind.
Being omitted entirely from the FA Cup squad to face Newcastle, the writing appeared firmly on the wall. Arteta has revealed that an offer is on the table for the youngster, and at this stage he can do no more.

It should never have got to here in the first place. But now it has, if Balogun isn’t willing to trust his employers, whom he’s been with since 2008, then there will be no amicable solution. Equally, Balogun wants to play. If he’s not going to at Arsenal, then he’s right to leave.
Speaking about Balogun’s contract situation, Arteta said: ‘You need three parties to make a deal. For sure, the club wants to make a deal, the manager wants to make a deal, the player wants to stay and I’m not sure about the agent.

‘I’m telling you that we are doing everything we can to keep him here and hopefully from the other part they are doing the same and they defend the same interests, which is the players’ interest, which is to stay at the football club and be successful with us.’
Liverpool have been linked with a move for Balogun but it appears that the talented striker’s preferred destination is RB Leipzig.

Balogun’s Nigerian agent Emeka Obasi used to look after RB Leipzig-owned winger Ademola Lookman and brokered the deal that took the Super Eagles hopeful to the German Bundesliga club in 2019, lending credence to the report.

He joined the north London club at U8 level and signed his first professional contract in February 2019.
Born in New York and raised in the United Kingdom, Balogun is provisionally cap-tied to England as he represented the Young Lions at the 2018 UEFA European U-17 Championship, playing four games as England reached the semi-finals, but the free-scoring Arsenal striker has hinted at switching international allegiance from England to Nigeria.