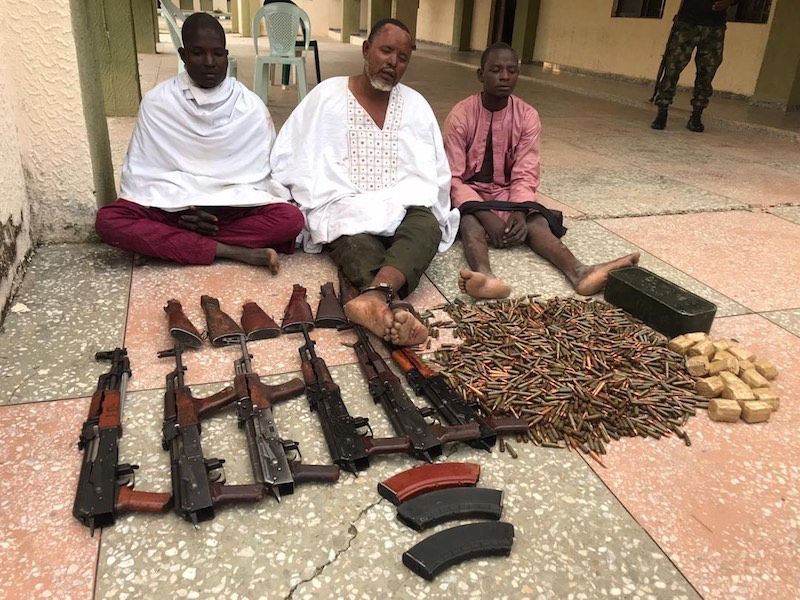 Francis Sardauna chronicles the successes recorded by troops of Operation Sahel Sanity in tackling banditry, kidnapping and cattle rustling in the North-west in the last six months

The aim of the exercise which subsequently dovetailed into a real time operation, is to support Operation Hadarin Daji in eliminating bandits, kidnappers and cattle rustlers in the region for peace and normalcy to be restored in communities hitherto captured by the mercenaries.

The anti-banditry operation was launched as part of activities commemorating the 2020 Nigerian Army Day Celebration, during which the Nigerian Army Super Camp IV was established in Faskari Local Government Area of Katsina State.

The military operation, headquartered at the Special Army Super Camp IV, is comprehensively stemming the wave of insecurity orchestrated by marauding bandits in affected States of Katsina, Zamfara, Kaduna, Niger, Sokoto and Kebbi.

Prior to the commencement of the operation, killings, kidnappings and rape of innocent citizens, particularly farmers by the hoodlums had crippled both economic and social activities of the region as many lives and property were equally destroyed.

But six months into the operation, residents of the zone, especially those living in rural communities have witnessed significant improvement in terms of security due to the tremendous achievements recorded by the gallant troops of the operation.

The brave soldiers, within the period under review, carried out series of successful clearance operations, ambushes and other aggressive and confidence building patrols within the North-west region.

These multiple and coordinated operations led to the killing of 220 bandits and rescuing of 642 kidnapped victims from captivity. The troops also destroyed 197 bandits enclaves, including the notorious Katsina Dangote triangle and nabbed 335 suspected bandits, 326 illegal miners in Kebbi, Kaduna, Niger, Zamfara and Katsina States.

Interestingly,147 bandits informants and collaborators, 14 bandits arms suppliers, 24 rustled cattle marketers and 46 bandits logistics suppliers were arrested and a
total of 7,761 cows, 1,867 sheep, rams and 4 Camels were recovered and given back to the owners by the troops within the period.

Sadly, two officers and four brave soldiers paid the supreme price in the course of safeguarding the lives and property of the citizenry in North-west.

Giving a breakdown of the successes recorded by the troops of Operation Sahel Sanity at the end-of-the-year press conference at the headquarters of the operation in Faskari, the acting Director, Defence Media Operations, Brig.General Benard Onyeuko, added that 165 bandits’ attacks and 81 kidnap attempts were successfully foiled by the troops.

Onyeuko, represented by the Nigerian Army Operations Media Coordinator, Colonel Aminu Iliyasu, said: “In all the operations conducted from 1 July to 31 December 2020, a total of 220 armed bandits were neutralized during combat with the gallant troops of Operation SAHEL SANITY.

“Additionally, 73 AK 47 Rifles, one GPMG and 194 Dane guns were captured from the criminals. Equally, 5,032 rounds of 7.62mm Special ammunition, 568 rounds of 7.62 mm NATO ammunition and 156 live cartridges were also captured by the troops.

He added, “Similarly, a total of 7,761 cows, 1,867 sheep, rams and 4 Camels were recovered and given back to the owners by troops within the period. It is also heartwarming to note that, a total of 642 kidnapped victims were rescued by the valiant troops, and this include the rescued 344 students of Government Science Secondary School Kankara”.

According to him, “It is pertinent to note that few setbacks were recorded as a result of engagements with bandits during the conduct of operations within the period under review. Such are the regrettable loss of 2 Officers and 4 brave soldiers who paid the supreme price in the course of defending the dignity of our people”.

He said since the flag off of the operation, significant improvements have been made in bringing peace and stability in the North West west region as evidenced in the massive resumption of socio-economic activities with little or no threats to lives and property.

The successes achieved wouldn’t have been possible without the cooperation of the people of the zone, which in most times sacrificed their lives in providing timely information to security personnel. This perhaps prompted Brig-General Onyeuko to applaud their resilience in the ongoing war against banditry.

He, therefore, encouraged residents to continue to avail the troops with actionable information that would aid the desired goal of the operation, assuring of the Nigerian Army’s commitment to restore sustainable peace in North-west.

Accordingly, after thorough review of the numerous achievements recorded and the need to completely ward off recalcitrant bandits in North-west, Lt-General Buratai graciously extended the duration of Operation Sahel Sanity to March 2021.

The extention of the operation’s timeframe pave the way for the Nigerians soldiers to consolidate on the gains so far achieved through confidence building patrols, ambushes and clearance operations until the bandits and other criminal elements are completely flush out of the region and the country in general.

However, some residents of Faskari and Batsari Local Government Areas, which have been described by pundits as epicentres of bandits and kidnappers, are of the view that more need to be done in curtailing banditry in the state.

The residents who spoke in a telephone interview, called on the military to sustain aggressive confidence building patrols in communities and villages across the state in a bid to effectively address the threats posed by bandits and other criminal elements.

One of the residents, Usman Kabiru, said: “We have indeed felt the immediate impact of Operation Sahel Sanity with the tremendous successes achieved within the short period but these bandits are still roaming around our communities. So, the military should sustain regular patrols in villages, especially those in Batsari”.

Muhammed Dan-malam, a resident of Jibia, noted that there is urgent need for the military and other security agencies to sustain the current tempo to ensure that the bandits displaced do not regroup in other parts of the state from where they would carry on with their nefarious activities.

“We leant that the military have dislodged bandits’ camps in the state and most of them who survived the military’s battle are moving in our villages. There is tendency of them regrouping in some parts of the state, so we are calling for regular patrols in flashpoints”, he said.

He, however, called on well-spirited individuals, groups and NGOs to support families of those displaced as a result of the activities of bandits and other criminal elements before the formation of Operation Sahel Sanity in the state.

Therefore, troops should not rest on their oars but continue to sustain the tempo of the operation and dominate the entire region with confidence building clearance operations until these criminal elements are eliminated.