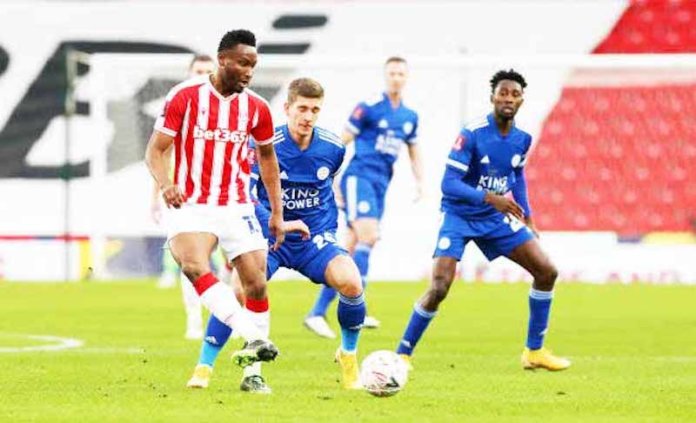 Both Ndidi and Mikel played all 90 minutes while Iheanacho was a 82nd minute substitute.

Even without Jamie Vardy and James Maddison, a strong Foxes side displayed too much quality for the Championship side.

James Justin’s superb effort into the top right corner set Leicester on their way before Marc Albrighton, Ayoze Perez and Harvey Barnes added to their tally.

Stoke’s best chance fell to Sam Vokes with the score at 0-0 but he blazed a volley over from close range.

While Michael O’Neill’s Stoke side acquitted themselves well and at times troubled the visitors from set-pieces, there was a noticeable gulf between them and a Leicester side occupying third place in the Premier League.

Vokes’ miss, coupled with Justin’s excellent run and sparkling finish, set the tone for what was to follow.

With Leicester enjoying success down both flanks, Albrighton nipped in off the left to double their lead just before the hour mark.

Perez then steered a right-foot shot into the bottom right corner from Timothy Castagne’s pass before Barnes rounded off the scoring with a powerful effort.

One positive for Stoke was the return of Ryan Shawcross to their starting XI.

The Potters captain, who was capped by England in 2012, has spent much of the past 18 months recovering from a broken leg, and calf and groin injuries.

Speaking after the game, Leicester Manager, Brendan Rodgers said: “We stayed strong for 15 minutes or so when Stoke started well. After that we were excellent. The first goal is important and from that point we were very good.

“I thought at half-time we needed to be quicker to second balls and press the game with more urgency, that then gave us the tempo in the game. We have a good team that is mobile and it was about making sure we ran into the spaces, nice and aggressive,” concluded the Foxes boss.