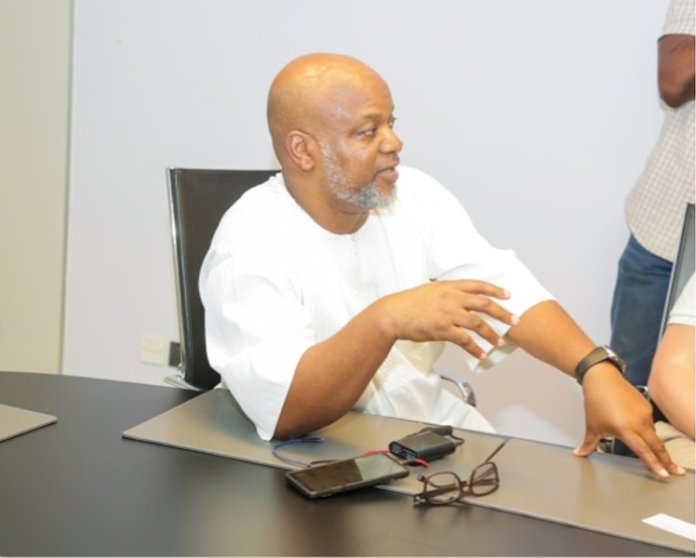 In the past 12 years, media mogul and visionary entrepreneur, Akin Salami, has been at the forefront of creating and promoting African content in the diaspora with a slew of businesses across varied sectors including banking, technology, aviation, and broadcast media in Africa and the United Kingdom. He shares with Vanessa Obioha his latest project,
The Voice Nigeria, and his plans to leave a lasting legacy

Akin Salami hates traffic like most Lagosians; dreads being snarled-up in traffic. Recently, while being driven from the mainland to the Island, he finds the notorious traffic hotbed, Third Mainland Bridge, free of any congestion. His excitement and relief reflect in his tone.

“This is the magic of me hating traffic,” he jokes.
Lately, Salami who moved to the United Kingdom over two decades ago has been spending more time in Lagos. The reason is not far-fetched. He is neck-deep in the production of The Voice Nigeria Season 3. The news about his acquisition of the rights to produce the music reality TV show in Nigeria — through his television company, FAME TV — was whispered in 2019 but by last August, the news reverberated across the country as the hosts, coaches, and sponsors were unveiled.

The last time Voice Nigeria held was in 2017, then it was produced by M-Net and taped in South Africa. Salami is, however, flipping that script. For the first time, the singing competition will be produced in Nigeria by his broadcast and production company, UN1TY, in partnership with Livespot 360, making the populous nation in Africa, the 40th country to achieve that feat.

The international music reality show which was birthed in Holland in 2010 is a fan’s favourite due to its unique format. Contestants go through a blind audition with coaches’ chairs backing them. If the coaches like their singing quality, they press a button that automatically turns their rotating chairs to see the contestant.

Then comes the best part. If the contestant appeals to more than one coach, the coaches will have to compete to have the contestant in their team. It doesn’t end there. After the blind auditions, contestants will compete with team members to secure a spot at the live shows. The eventual finalists will either proceed to the knockout stage — where again they compete against each other but have the opportunity to select a song of their choice — or to the live show where they compete with other teams, depending on the version of the producers.

This unique format made The Voice a global brand as many countries began to make their version. The most popular versions are The Voice UK and The Voice America.
If everything had gone as planned, the third season of the show would have been held earlier in the year. But COVID-19 struck and production was delayed for seven months, inadvertently affecting the planned budget.
“Everyone is getting tested, put in hotels, and we are having an active medical team on the ground. All of this was not part of the budget because there was no COVID-19. The delay has a cascading effect on all our plans,” he says.

Producing The Voice in Nigeria is no cinch. It requires Salami to tick all the right boxes to meet international standards. In this case, financing and technicalities. But he is not losing sleep over it. The graduate of Engineering from the University of Ife is lucky to belong to the class of people who are living their dreams, therefore, unfazed by the daunting task.

Although he admits that he has a knack for perfection.
“I compete with myself. I like to be a perfectionist and that can be seen as a problem. I like to get things done. When they say it’s not going to work, that’s when I want to do it,” he remarks.
In the past 12 years, Salami has been at the forefront of creating and promoting African content in the diaspora. He is renowned as a media mogul and visionary entrepreneur who owns several thriving businesses across varied sectors including banking, technology, aviation and broadcast media in Africa and the UK.

However, he is mainly known for his work in media production. He launched his illustrious career in technology at Barclays Capital but resigned to pursue a career in media production, rising to become a partner at DAVE LLP, an audio-visual services company in the UK. This birthed his desire to revolutionise black media.

“When I got into TV in the UK, I realised that there was nothing on UK TV that represented me. And the ones available were of poor quality. We had to start creating content for Africans in the diaspora, as well as Africans in Africa,” he explains.
Together with a friend, they launched OH TV, a UK television channel and production company focused on the creation and promotion of wholesome family entertainment and keen on preserving the African heritage through dynamic and authentic content. Under his seven-year leadership as the chief executive officer of the company, they produced the first African content made by Africans aired on pay-TV platform DStv, ‘Jim Iyke Unscripted’.

He also ran a widely successful competition for a popular wine company, ‘The Face of Sweet Lady.’ He pioneered and produced TV shows such as the UK Gospel reality talent TV show, Time2Shine and God’s Children Great Talent (GCGT), a Nigerian gospel talent show to identify young talents in the country.

Pushing the envelope further, they created the award-winning 2011 film, ‘The Mirror Boy,’ written and directed by Obi Emelonye, featuring Nollywood superstar, Genevieve Nnaji. The film was the first Nollywood film to premiere at The Empire, Leicester Square, London with over 3,000 people in attendance.

‘The Mirror Boy’ release grew into a movement that eventually became the catalyst for jump-starting Nollywood in the UK and wider Diaspora with the film also being released in The Gambia, Ghana and Nigeria.
“What that movie did was to show that it can be done. It showed that if you create the right kind of content, it has the legs to travel.”

A firm believer of African content, Salami is bringing a similar attitude and resilience to The Voice Nigeria production. According to him, he and his team prayerfully and consciously selected partners that will bring his vision to reality. They include YouTube, ITV Studios, and Africa Magic. His sole objective is to produce not just any kind of show.
“But the best show that Nigerians have ever seen. The kind of goal we have given ourselves as a team for The Voice Nigeria is pretty high. And we are not taking any chances. There will be wows on the screen and the talents that will be on the show. We are not doing this just to have a show but a show that will connect with the Nigerian audience, brings wholesome TV viewing,” he notes.

To ensure this, he’s built a studio for The Voice Nigeria production. The studio is carefully designed to replicate the international standards. From the seating to the stage design, no detail is omitted. He projects that The Voice Nigeria will further enable the environment for Nigeria creatives and build capacity for youths. The overwhelming number of entries they received from the online audition is a good pointer to his assertion. They estimated 5,000 entries but they ended up receiving 11,523 entries.

“This shows that Nigerian youths are extremely ambitious, creative, and passionate about what they want to do. As difficult as the terrain may be, the youths are very resilient. I’m not surprised at the applications we saw. There is an appetite for what we are doing and we get the chance to raise the standard of living of people by the content we show on TV,” he adds.
He reveals that one of his goals is to make the first Nigerian global superhero feature film.
“We have the storyline already, just waiting for the right timing. You will be amazed at what these stories do for young and upcoming talents.”

By all standards, Salami is a wealthy man even if he sees money as a by-product. It is easy to assume that everything was offered to him on a silver platter. His parents, he points out, played starring roles in his success.
“I wasn’t born with a silver or a wooden spoon either. Everything I am today is a result of my parents. They gave us (him and his siblings) a shoulder to lean on. They gave us values that we stood by.”

With the slew of businesses he operates, the proud old boy of Government College, Ibadan is concerned about leaving a lasting legacy. To build a business empire that outlasts his name and impact meaningfully on the lives of people. This is the way he wants to be remembered.