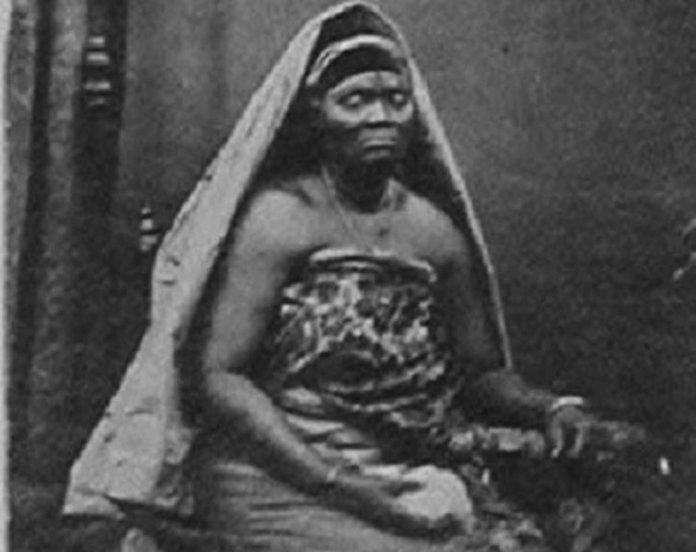 Ranti Thomas
Ogun State, unarguably is one of the states in Nigeria naturally blessed with national heroes.
The state is also highly rich in socio cultural heritage having produced celebrated heroes and heroines who fought for right causes at their time.

In the hall of honour therein lies this late renowned woman, who also happened to be a well respected political figure in Egbaland as of that time, whose role as a powerful female aristocrat and slave trader in pre-colonial and colonial Nigeria history can never be erased. Strangely though, she was never celebrated until recently when her descendants led by Chief Akinfolabi Akindele, of Adamakin Investment Limited who is also a great grandson of Madam Tinubu decided that the time had come to celebrate her.

It is important to note here that while the likes of Queen Amina of Zaria, Mrs Olufumilayo Kuti, are being celebrated as national heroines, Madam Tinubu’s love and sacrifice for her fatherland seemed to have been forgotten.
She played a pivotal role and note too that she has been of benefit to the like of Mrs Kuti because the land in which the Kuti school is located belongs to Madam Tinubu.
December 3rd, 2020 marked the 133th remembrance of Madam Efunroye Tinubu, the renowned businesswoman and brave warrior in the history of Egbaland/ Yorubaland.

History revealed that Madam Tinubu was a successful businesswoman in Abeokuta, who traded in salt, slaves and was actively involved in the politics of Egbaland.
In Abeokuta where she lived at the time, Madam Efunroye Tinubu also traded in arms and supplied Abeokuta with ammunitions in the war against Dahomey.

Her activities during the war earned her the chieftaincy title as the first Iyalode of Egbaland in the 19th century.
The significant impact and courageous role played by the late heroine in the history of Egbaland deserves to be widely celebrated by the Egba just like the late popular Lisabi was honoured.

It is in the light of this that Tinubu’s descendants, have called on the Ogun State government to immortalise this heroine for her remarkable legacy and for the service she rendered to the Egbas during the Dahomey war in the 19th century.
While speaking at the 133th remembrance, Mr Sulaimon Osuntinubu explained the need for the state government to immortalise the heroine saying the positive impact of the female warrior would forever be remembered in the history of Ogun State.
He also enjoined the state government to press further by setting aside a day to celebrate the heroine legacy in Egbas history just as Lisabi day is yearly celebrated in Egbaland.

He said: “We are now calling on the state government to make our historical mother remembrance to become a state affair, the first Iyalode of Egbaland deserves to be immortalised beyond her statue lying at Totoro.”
While part of the event to commemorate her 133 years took place in Abeokuta, thousands flocked to the Mushin area of Lagos to celebrate the late iconic warrior in grand style.

The iconic first Iyalode of Egbaland was celebrated simultaneously both in Ogun and Lagos states.
The event which will be hosted yearly by her descendants was spearheaded and fully sponsored by the sole attorney of the late madam Tinubu family, Chief Akinfolabi Akindele.

Speaking at the event, Akindele who also manages Madam Tinubu’s estates said the family placed a premium on her annual remembrance, because the history of the first Iyalode of Egbaland deserves more awareness in Nigeria.
He said Efunroye Tinubu was more than a black traditional woman when alive, she defiled all the so called native and traditional norms that African women were subjected to, she acquired success from her business, her acumen in engaging in Egba politics and Dahomey crisis among others.

However, he expressed concerns on how she was not widely celebrated today, adding that Tinubu’s history was about to be eroded completely aside the Lagos Tinubu Square and Ita-Iyalode in Abeokuta named after her.
He then called on the authorities to immortalise the late superior black woman by making attractive tourism programs to showcase her heritage to the world.

Akindele also stated that the family has a women based program to help train young girls in all forms of business, since madam Tinubu was a renown business woman.
As a further step to immortalise the late first Iyalode of Egbaland, Akindele said the family had
Akindele revealed that the family had created Efunporoye Osintinubu foundation which is a non-governmental organization that would empower women to earn a living.

The foundation, he said would also provide free diagnoses to the sick.
At the colourful events in Abeokuta and Lagos, different cultural dances and traditional displays were staged to entertain people.

The celebration formally began on 3rd December, 2020 when customary rites were performed at the tomb of the late Madam Tinubu lying at Tinubu compound, Ijokodo, Abeokuta.
Following the annual opening declaration at the ancestral tomb, hundreds of people were received at the Tinubu’s shrine. They came to seek blessings from the deities.
Deities worshipped at the late business woman’s shrine include Ogun (the god of iron) Osun (water goddess),Obata among others

The celebration continued on Saturday(05/12/2020) with Islamic session held at the family’s residence at Mushin.This is the sixth time the celebration would take place in Lagos. It was started by the late Madam Olufunmilayo Ransom-Kuti.
Madam Efunroye Tinubu died on 3rd December 1887, at the age of 82.
Efunporoye Osintinubu, was a politically significant figure in Nigerian history because of her role as a powerful female aristocrat and slave trader in pre-colonial and colonial Nigeria.

The late Madam Tinubu was famous for her activities when she traded in arms and supplied Abeokuta with munitions in the war against Dahomey. Her activities in the war earned her the chieftaincy title as the first iyalode of all of Egbaland in the 19th century. She lived from 1805 and died on the 3rd of December 1887.