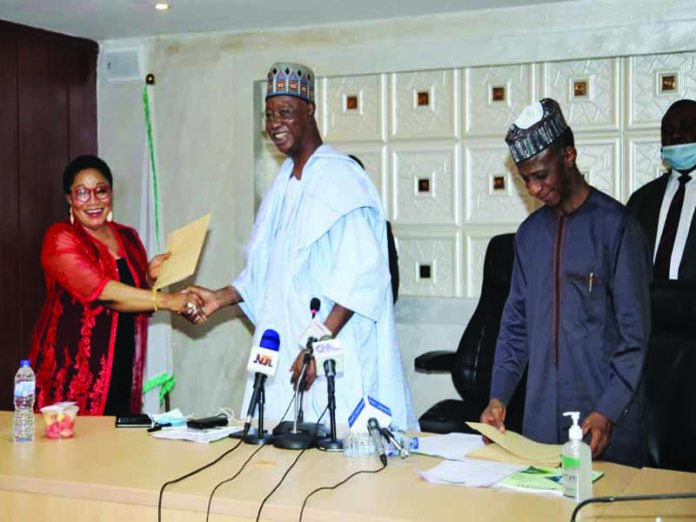 12 Nigerian universities across the six geopolitical zones will begin 2021 on a sound note as the Tertiary Education Trust Fund, Tetfund, recently commissioned them with a grant of N1bn each as Centres of Excellence to champion research in assigned areas of national priority. Olaoluwakitan Babatunde dissects the implications of R&D vis-à-vis the Centres national development

The phrase, “garbage in, garbage out”, is a concept that underscores that flawed or nonsense input data can only produce nonsense output or garbage. It is more like the law of sowing and reaping in religion.
The relationship between Research and Development (R&D) and national development is one area this is most manifest. Nations, which don’t care about R&D or throw peanuts at it, reap peanuts. But nations that invest handsomely in R&D reap generously in terms of socio-economic prosperity and quality of life of their citizens. It is, therefore, not surprising that the world’s leading and emerging economies are knowledge economies. They have achieved and sustained their feats by linking education and development through unrelenting investments in R&D.

For instance, one common thing among the top ten global economies today, namely U.S, China, Japan, Germany, India, U.K, France, Italy, Brazil, Canada, (in that order) and others like South Korea and several other Asian and European economies, is that they are among the heaviest investors in R&D. Also, seven of the top ten/most competitive economies – Singapore, U.S, Hong Kong, Netherlands, Switzerland, Japan, Germany, U.K, and Denmark are also ranked among the top 15 R&D funders by the UNESCO Institute of Statistics.

Indeed, in the developed economies, long-run economic growth is powered by innovation. A study published by the United Kingdom National Endowment for Science, Technology and the Arts discovered that two-thirds of U.K’s private-sector productivity growth between 2000 and 2007 was a result of innovation. Also, what took the developed nations centuries to achieve, South Korea achieved in a few decades by breaking into the club of trillion dollar economies in 2004 courtesy of investment in R&D and innovation. It is the 12th largest global economy by GDP in 2019 and 4th in Asia, rivaling China, Japan, and India. Equally, from a GDP of mere $189.439 billion in 1980, India has continued to rise from an agrarian economy to a knowledge economy, hitting $2.94 trillion GDP to overtake U.K and France and become the fifth-largest economy in 2019.

Significantly, however, at the centre of these innovations powered by R&D are the universities. Some of the world’s most celebrated discoveries such as invention of the telegraph, the discovery of AIDS, internet, advances in stem cell research, etc. have been made through university research. Currently, 56 per cent of basic research in the US are conducted by the universities, which pass their finding on to the private sector.

Massachusetts Institute of Technology (MIT) in Boston, which is ranked 14th in research expenditure per annum in America is nearing $1billion ($952,017,000), with American Federal Government providing $487,434,000, and State and local government providing $1,797,000. As of 2014, 81 Nobel laureate have been affiliated to the MIT. Unfortunately, while Wikipedia lists U.S, China, Japan, Germany, South Korea, India, Brazil, UK, Russia, France, among the 90 nations that recorded more than $50 million annual expenditure on R&D in the last ten years, Nigeria was conspicuously missing. Only South Africa (32nd), Morocco (50th), Ethiopia (58th), Tunisia (59th), Uganda (71st), Sudan (76th), Algeria (77th), and Botswana (83rd) got a mention.

Tetfund to the Rescue
It is against this backdrop that the decision of the Tertiary Education Trust Fund, Tetfund, to set up Centres of Excellence to power R&D in 12 Nigerian universities (two in each geopolitical zone) has been received with a sigh of relief by the universities, stakeholders in the education/economic sectors and citizens.

Although this paradigm shift towards deepening Tetfund’s interventions in the core areas of academic components alongside physical infrastructure development dates back to 2014 in Prof. Suleiman Bogoro’s first stint as the Executive Secretary of the agency when he proposed a new Department of R&D/Centre of Excellence, it was only in late November 2020 on his second stint that the Centres were ratified and also inaugurated by the Alhaji Kashim Ibrahim-Imam-led Tetfund Board of Trustees, BoT, at the agency’s headquarters in Abuja.

Underscoring the import of the Centres, Bogoro stated: “Let me proclaim, once again, the inescapable and universal doctrine, one that has since garnered ardent adherents in the world’s most successful knowledge economies: there is but one true path to socio-economic and technological advancement – R&D – and the new 12 Centres of Excellence, which we are to fund for five years with a grant of N1 billion each, will be at the heart of the mechanism for the attainment of our national aspirations”.

“It is to bring together the complementary resources needed for technical development and industrial application. This includes concentrating multidisciplinary and translational research competence in order to further the development of products, processes and services, typically by focusing on problems that demand larger efforts than can be provided by smaller projects.

“It is to bridge the gap between researchers and users, and stimulating and strengthening triple-helix relationships. This is in order to enhance scientific research being patronized by industry, and in order make the Tertiary Educational Institutions generally more responsive to industry needs. In addition is expertise development and training at doctorate level in areas of industry interest, and the development of knowledge management platforms and innovation hubs.

“Perhaps most importantly, where national systems lack critical mass in any one field of inquiry, the Centres of Excellence approach, with its emphasis on resource concentration and interdisciplinary approaches, will address three main challenges, namely, dilution and redirection of possible resources for research, challenges poses by the rapid expansion of higher education to meet increasing demand, and fragmentation of research-oriented action”.

To whom much is given
Inaugurating the Centres, the Chairman of the Tetfund BoT, Alhaji Kashim Ibrahim-Imam, who expressed appreciation to the Minister for Education, Mallam Adamu Adamu and President Muhammadu Buhari for approving the initiative, emphasised the need to reciprocate the support by way of results.
“To whom much is given, much is also expected. I want to acknowledge here that at Tefund, much has been given. On your behalf, I want to thank the President and the Honourable Minister of Education because it is one thing for Tetfund to conceive this idea, but another for the Honourable Minister to go the extra mile to obtain a presidential approval.

“N1 billion for each Centre for Research Excellence, that is N12 billion. That is a major step in the right direction. I also want to let you know that this will be an annual event. Next year, we will be nominating another set of universities as Centres of Excellence.
“It is also a very important step for us as a country. No nation has ever developed or can develop without technology. The most advanced economies in the world are those that are knowledge-driven and we must invest heavily in R&D in order to make the quantum leap we crave as a nation”.

He said Tetfund was deliberate in emphasising food security in various ways in assigning the priority research areas to the Centres of Excellence, noting that whereas Nigerian farmers could hardly do tow or three metric tons of maize per hectre, their counterparts in more advanced and technologically driven countries exceed between 18 to 2o metric tons per hectre.
Ibrahim-Imam, however, assured that Tetfund was aware of the need to strike a balance between R&D and physical infrastructural needs of the tertiary institutions.

“I have visited so many public universities, polytechnics, and colleges of education since the past few weeks. The recurring phrase everywhere is ‘But for Tetfund, but for Tetfund’.
“As I said, it is R&D that will take Nigeria to the next level. But we also have to balance it with creating the enabling environments for scholarship, learning, and even for research”, he added.
He charged the universities to invest at least 70 per cent of the research grants in “some safe and high yielding financial instruments so that this fund will continue in perpetuity and you will be able to fund research year in year out”.

Speaking on behalf of the Vice Chancellors of the beneficiary institutions, the Vice Chancellor, University of Benin, Prof. Lilian Salami, commended Tetfund for the initiative, assuring that the universities would not disappoint.
Stakeholders believe that although Nigeria still has a long way to go in R&D funding, a journey of a hundred miles starts with a step and Tetfund has taken that critical right step in the right direction.