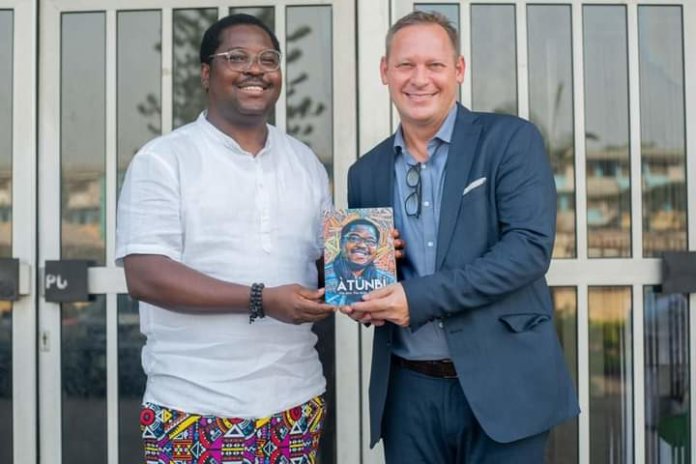 In an atmosphere of social distancing, the Lagos launch of the emotion-filled biography of the pioneering artist for the Arts in Medicine movement in Nigeria, Kunle Adewale was indeed spell-binding. The audience, made up of friends and associates were completely consumed by the compelling story behind the book titled, “Atunbi: The Grit, The Gut and The Glory.’’ Held at the Sickle Cell Foundation, Idi Araba, the launch provided an avenue for the friends of Kunle Adewale to eulogise him for his commitment towards using the arts as instrument of change in the health care system.

“We all have stories to share. I want to use my story to inspire others and that’s why I wrote the book. The book is not just for young people,’’ Adewale said during his opening remarks. The book ‘Atunbi’ is based on his personal account of resilience through trying times to build a career with global impact. The ninth of fourteen children was raised in Mushin, from a very humble background.

“Some thirty years ago, I used to watch my father beat my mum. There were days that my father would lock us up and would continue to abuse my mum. I grew up on the trauma of a violent home. My house was like hell. In 2010, my mum slept and never woke up again. She saw the grit and the gut but never saw the glory. I wrote SSCE seven times before I eventually passed and UME five times before I was admitted into Obafemi AwolowoUniversity to study Fine and Applied Arts,’’ he said.

After working as an artist and a teacher, Adewale doggedly searched for new ways of impacting the lives of others. He established Tender Arts Nigeria in 2013 with focus on therapeutic art. In 2015, he was selected as one of the Mandela Washington Fellows for his role in improving lives and the society through the arts in medicine project.

At the ceremony to usher in ‘Atunbi,’ the golden-voiced Simidele rendered a melodious delivery of the National anthem before she was invited to sing her own composition titled, “Butterfly.’’ The Programme Co-ordinator, Sickle Cell Foundation, Ebenezer Adeleye described Adewale’s passion for art therapy as “infectious.’’

On his part, the Public Affairs Officer, US Consulate Lagos, Stephen Ibelli commended the artist-turned-social entrepreneur for his efforts at changing lives.

“Kunle was a great candidate for this Nelson Mandela Fellowship programme. We feel that all of our exchange programmes are really life-changing. And they give you the tools with which you can take your passion to the next level, maybe talking to policy makers and hoping to change some laws guiding the medical system. Art for patients work. It helps people to heal themselves from inside. Music and other art forms help to heal. The quality I admire most in Kunle is his humanity. Kunle is a good example of how someone can overcome the voices of doubts and obstacles in life,’’ he said.

Co-compered by Enitan Sophie and Femi Morgan, the event also featured the writer and poet, Iquo Diana Abasi as well as another visual artist and founder, Cowrie Studios, Abolore Sobayo who spoke on how the imageries evoke in Atunbi resonated with his background in Mushin.