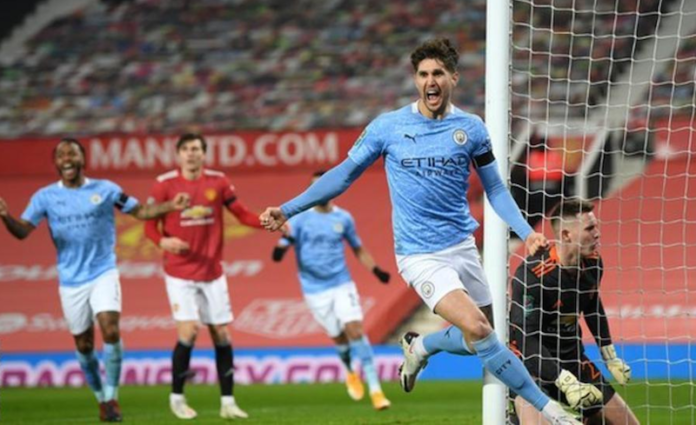 Manchester City deservedly beat Manchester United 2-0 to reach the Carabao Cup final and will now face Tottenham at Wembley as they look to win the competition for a fourth straight year.

Second-half goals from John Stones and Fernandinho secured their progress as City cut loose after a first period in which both sides had chances and goals disallowed.

Pep Guardiola’s side looked the more likely scorers afterwards, despite United’s increasing desperation, and when Anthony Martial and Aaron Wan-Bissaka could only combine to clear a corner to the edge of their own box, Fernandinho drilled a first-time volley into the bottom corner from 20 yards.

City will equal Liverpool’s record of winning the League Cup four times in a row if they beat Jose Mourinho’s Spurs on Sunday, 25 April.

It will be a first final meeting between Guardiola and Mourinho since 2011, when the current Spurs boss’ Real Madrid side denied Barcelona the treble by winning the Copa del Rey.

It was a disappointing night for United boss Ole Gunnar Solskjaer, whose side have now lost at the semi-final stage of their past four cup competitions and failed to heed their manager’s call to win some silverware as tangible proof of their recent improvement