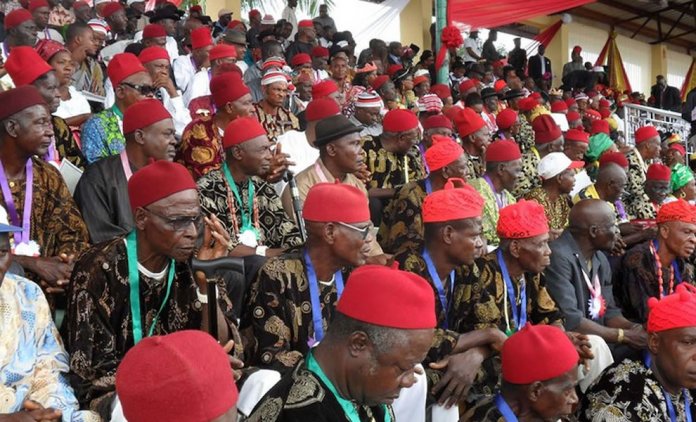 According to the communique of the meeting made available to THISDAY, they implored “all the political parties to cede their presidential tickets in the 2023 general election to the South-east.”

The Igbo leaders agreed that a president of Igbo extraction would be “in the interest of justice, equity and national unity.”

The communique of the meeting further said: “With substantial presence in every part of the country”, would give bloc vote and full support to any of the two major political parties that nominated their presidential candidates from the zone.” The communique read by former Secretary to the Government of the Federation, Senator Pius Anyim, said that a president from the southeast “will work to unite and develop every part of the country. “Such a president will be president of all Nigerians, irrespective of their political, ethnic and religious backgrounds.”

The communique stated that an southeast president would ensure “that all citizens and every part of the country is given a sense of belonging and treated with utmost sense of justice.

“Such was the dream of the founding fathers of this great nation, wherefore they declared that ‘though tribe and tongue may differ, in brotherhood we stand’.

“For the same reason, they also committed to building a just nation, where no man is oppressed so that Nigeria may be blessed with peace, plenty and prosperity,” the communique added.

The group implored Nigerians across political, ethnic, religious and geopolitical divides to support the zone’s aspiration in 2023 “as a mark of good faith and to promote justice and national harmony.” It described such a support as vital “in giving every part of the country a sense of belonging and in promoting national unity and solidarity.

“It is the loudest reassurance of equality of all parts and that the country indeed belongs to all members of the Nigerian commonwealth.”

The political leaders restated their commitment to “the deepening of the nation’s democracy as the surest way to fast-track national development and building an egalitarian society, where no man is oppressed for reasons of class, ethnic, religious or political affiliation.”

It was reported that aside from Kalu and Anyim, other eminent Igbo politicians at the meeting included former Deputy Senate President, Senator Ike Ekwerenmadu, Hon. Nkeiruka Onyejeocha, Hon Toby Okechukwu, Deputy Chief Whip and Deputy Minority Leader of the House of Representatives.

In an opening remark, the convener of the meeting, Kalu, said the gathering was intended to unite all the prominent politicians from the zone and ensure the unity of purpose among them for the emergence of Nigeria’s next president from the zone.

Kalu said that the meeting would help to disprove critics, “who believe that we cannot meet to discuss issues affecting us, especially our aspiration to produce Nigeria’s president in 2023.”

Other Igbo leaders spoke in a similar vein, were Ekwerenmadu, Anyim, Onyejeocha, Okorie and Odom.

They were all in unison that 2023 was the turn of the zone to produce the nation’s president.

The Igbo leaders said that “the South-east is the only zone in the South that is yet to produce a president in the current democratic dispensation”.