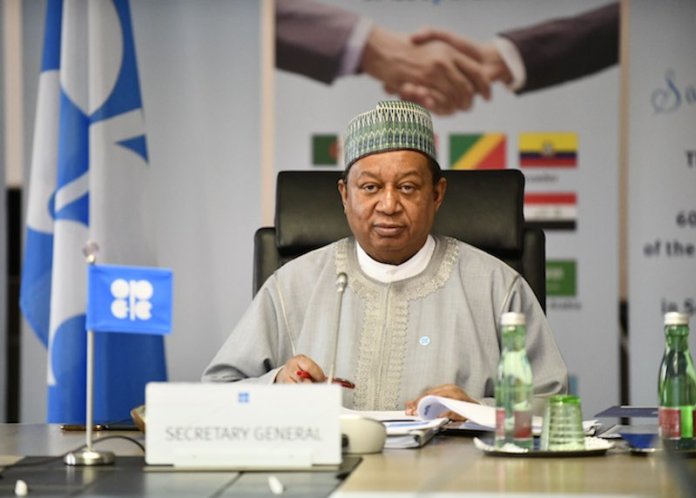 Members of the Organisation of Petroleum Exporting Countries (OPEC) and their allies, including Russia, yesterday failed to reach an agreement on production levels for February, with talks expected to continue today.

The cartel had agreed after its last summit, held from November 30 to December 3, to raise production levels by half a million barrels per day in January and to thereafter meet at the beginning of each month to decide on any adjustments to production volumes for the following month.

The meeting also paved the way for a gradual return of two million barrels per day to the market over the coming months” according to OPEC’s Secretary General, Dr. Sanusi Barkindo.

Speaking at the beginning of yesterday’s meeting, Saudi Energy Minister, Prince Abdulaziz bin Salman, told his counterparts that it was not time to lose guard, noting that the battle to stabilise the crude oil market is far from being won.
“As we see light at the end of the tunnel, we must at all costs avoid the temptation to slacken off in our resolve. Do not put at risk all that we have achieved for the sake of an instant but illusionary benefit,” he said.

However, Russia was the only member of the coalition that had publicly called for production increases in February, arguing that the recent price rally warranted additional supplies on the market.

“To restore our output, that we’ve reduced a lot, the price range of $45 to $55 a barrel is the most optimal. Otherwise we’ll never restore production, others will restore it,” Deputy Prime Minister Alexander Novak told reporters in Moscow.
Yesterday, prices for both North Sea Brent Crude and West Texas Intermediate (WTI) crude hit a 10-month high at $53.33 and $49.83 respectively, but later pulled back in the afternoon.

There was no official statement on why an agreement could not be reached, but sources within the organisation told journalists that “since there is still no consensus, it was decided to continue the meeting tomorrow.”

Iranian Petroleum Minister Bijan Zangeneh said earlier in the day that OPEC+ was discussing two options, to increase oil production in February by 500,000 barrels per day or to maintain the January parameters.

Meanwhile, Saudi Arabia, has warned against unleashing more barrels on to a fragile market, adding that the new coronavirus variant was “worrying and unpredictable”.
Salman told officials from the 23-member OPEC+ group that joint efforts to restrict production and manage the oil market must be maintained.

“Do not put at risk all that we have achieved for the sake of an instant, but illusory, benefit. Our job is not yet done”, Financial Times quoted Salman to have said ahead of the virtual meeting.
Saudi Arabia and other producers in the cartel are at loggerheads with Russia, which has been part of an oil alliance with the group since 2016, while Moscow has been keen to increase production in an effort to protect its market share.

Russia’s Deputy Prime Minister, Novak, also told the conference that he hoped the rollout of vaccination programmes, that were only going to “accelerate”, would pave the way for a recovery in oil production.

According to the report, the United Arab Emirates, too, traditionally a Gulf ally of Saudi Arabia, has also pushed to raise output in recent months as it increases its domestic production capacity.

Oil prices retreated from earlier highs as the ministerial meeting got under way, with Brent crude easing to as low as $50.75 a barrel, a pullback from the nine-month high of $53.33 struck earlier in the day while West Texas Intermediate, the US marker, dipped as low as $48.05.

Oil ministers from the OPEC+ group face a complex outlook for crude demand, with the reopening of economies in some parts of the world but renewed lockdowns in others.
The global rollout of vaccines has driven positive sentiment and pushed prices back above $50 a barrel, but case numbers in countries such as the United Kingdom have accelerated sharply, prompting new government curbs.