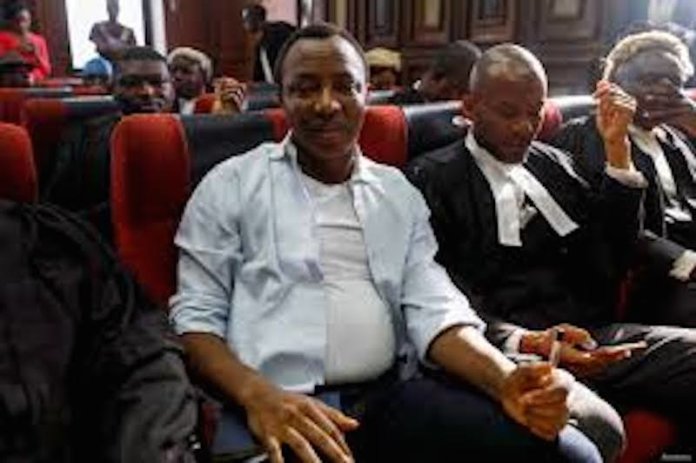 A Magistrate Court sitting in Wuse Zone 2, Abuja has ordered the remand of Omoyele Sowore and four others at Kuje Correctional Centre.

This is pending when their formal bail application will be heard today.

Sowore is being arraigned alongside four others by the federal government on three charges of criminal conspiracy, unlawful assembly, and attempting to incite others.

Although they all pleaded not guilty to the charges, the prosecution alleged that the defendants were arrested on New Year’s eve with placards calling for a violent revolution against President Muhammadu Buhari.

Sowore was arrested by the police for leading a protest against bad governance on New Year’s Eve in Abuja.

Sowore had earlier before the protest charged Nigerians on Twitter to hold a crossover protest by picking up a candle and a placard showing their grievances against the President Buhari administration.

“How about a crossover protest/uprising tonight? Anyone willing to participate? Pick up a candle and a placard showing your grievances against the regime; let’s upload our short videos and photos across our social media platforms. Let’s welcome the regime to a resolute 2021!

“#CrossoverWithProtest against tyrant @mbuhari’s regime, candlelight for #LekkiMassacre; a placard for #EndBadGovernment; procession to usher in #Revolutionary 2021, a fist for victims of repression-frozen bank accounts, malicious prosecution and detention of #EndSARS activists.

“#Crossoverwithprotest starts at 11.30 till 12.30a.m. across Nigeria, a candle, a placard and fireworks to usher in a RESOLUTE 2021 in Nigeria! Join with your friends and neighbours #EndSARS. #ObigboMassacre #LekkiMassacre, #EndBadGoveranceInNigeria, #BuhariTrainwreck, #RevolutionNow,” Sowore tweeted on Sunday, December 31, 2020.

The protest was eventually joined by others in states including Ondo and Kaduna.

This is not the first time Sowore will be arrested. He was detained for over 100 days in 2019 for calling for a #RevolutionNowProtest.

However, speaking yesterday on ARISE NEWS Channel, a sister broadcast arm of THISDAY Newspapers, Ezekwesili asked Buhari to release the five activists or prepare additional cells to remand more protesters if he fails to release them immediately.

Ezekwesili said the activists have the right to protest in a democracy.

Ex-minister said, “There is nowhere we have seen change happen without the resilience of a segment of the population to act regardless of the oppression that may be against it. That is why we must all applaud the resilience of Yele Sowore. Some people are not fair to him in dismissing his advocacy. I don’t dismiss it at all. Every society needs a Yele Sowore and all other groups and movements that consistently advocate for a good society.

“The truth is that the only pillar that has the motivation and has the right incentive to push for change in this society is the citizen’s pillar. Our current political class are not going to overwhelm all of the citizens.

“It will do the president good to ask that Yele Sowore and the other citizens that were imprisoned for merely protesting be released. Everybody in a democracy has the right to protest and that right can never be taken by anyone.

“The president will think of establishing many more cells because if he continues to keep Yele Sowore, his (New Year) speech will mean nothing to anybody, not as if to say anybody bothers to believe what he said because what we have consistently seen over the past years is a president that says one thing and does a completely different thing.”

Sowore, who was earlier declared a prisoner of conscience by Amnesty International in 2019, was detained for several months by the Buhari regime for allegedly calling for a revolution.

He was denied bail several times and even re-arrested inside the Federal High Court. However, he was released after domestic and international pressure in December 2019.