Those at the top are not always ogres, as this writer finds out. Bosses are human, too. I first met the Chairman, (Sam Nda-Isaiah) Kakaki Nupe, as an energetic young lad, freshly out of NYSC and trying to navigate myself around the political climate of Nigeria.

I grew up reading dozens of African pre-independence and post-independence political books in my dad’s library and profoundly admired the art of politicking. I got influenced by them, but had zero chance of having a grip on this dynamic game, until I got a call from Mustapha Sheikh Abdullah, intimating me of a meeting with a certain presidential aspirant from the yet to be registered All Progressives Congress (APC). The negotiation birthing the coalition merger was still in progress even though Chairman was of the Congress for Progressives Change, (CPC bloc). I had to dash out from Zaria to Abuja, telling my dad I would be back in the evening of the same day; that never happened. It was late 2014 and Chairman was having a press conference to announce his intention to run for President’s office. I had no idea what to expect when we attended.

I had painted the mental image of the conventional Nigerian big man as unapproachable, patronising and distant. The Chairman was the stark opposite: I asked him a question in the press conference bordering on policy continuation. He must have been impressed with this question, as he later asked Hajiya Rabi Gambari, a confidant of his to inform me to wait behind and see him after. Unknown to him, we had come in a group to pitch some ideas for his campaign. When we met, we discussed issues bordering on national and international politics, the use of digital media in campaigning, Howard Dean’s experience using social media to campaign, his inability to harness his online popularity into offline support and how President Obama rejiggered the playbook to win the election.

Summarily the team and I got hired to run the digital unit of his presidential campaign on the spot. That is how he operated: extremely spontaneous! We ran a diligent online campaign, and I am so proud of everyone who worked on the Sam4Nigeria team, coordinated by the then able Chief of Staff, Malam Abdul Gombe.

That is how the quartet of us, Bashir Ahmad, Personal Assistant to the President on New Media, Ahmed Sidi, Johannes Tobi Wojuola of the Presidential Media Team and I cut our teeth into Nigeria’s political landscape as it were. David Chinda came in afterwards and proved to be a reliable policy wonk.

The Chairman nominated us, more or less rookies, to join the Presidential Campaign Council’s media directorate, which had media linchpins such as Garba Shehu, Dele Alake, and Muhammad Labbo, to mention but a dew.

We once accompanied him on a visit to the then Presidential Candidate of the APC, private residence; there we met many of the current kitchen cabinet members. On sighting the current Presidential Spokesperson, Malam Garba Shehu, but then Director of Communications for the campaign council, the Chairman motioned towards him and handed Ahmed Sidi and me to him saying” these are now your boys”; —this is who the Chairman was, he went all out for his kins, he was one of a kind.

Chairman was a nationalist to the core and an incurable optimist in the greatness of Nigeria. Indeed, his motto was: “For God And Country.” His ringtone was the Nigerian National anthem, his email read “SamofNigeria,” he prided so much in Nigeria; Nigeria’s ambassador at large has been lost to the cold hands of death.

When I first saw Chairman, he initiated the conversation by extending his hand and said “Hi! I am Sam.” His handshake was firm and strong. He spoke with confidence and charisma. As time went by, I began to know him better and what he valued the most: people. To him, his employees were like his family. He made it known that everyone plays an important role.

“Don’t work for me. Work with me.” Those words still ring in my ears today. He did his best to pull everyone together, to build the team and make everyone feel a sense of belonging. No matter how disappointed he was at times, he was always optimistic.

He was also a boss who said, “If you need my help in any way, please let me know,” and he meant it. He would go to any length to achieve a request you made to him. He was willing to listen and never short of wise advice and opinions. He never, ever cut short a conversation with a “listen!”, even when he disagreed. He had his share of mood swings. It was never his style to vent his anger and frustration on any of us. He was also one who was never afraid to admit his mistakes.

One session with him could easily take up to two hours or even more, but they were always informative; he was a walking encyclopaedia; his understanding of Nigeria’s political history, geopolitics, and key actors was mind-boggling — this we would miss sorely. One wonders how he had such a repository of knowledge. Chairman was an avid reader. His study was where Tobi and I used to pass time most weekends, so rich is the library that we often found it hard to leave.

This year would have been my sixth year working with him, and with the level of confidence he reposed in me, it felt like we had known each other for over a decade. When I first started, I was just a fresh, young graduate. He had seen me through very critical stages of my life. I have learnt the import of loyalty, which shall never depart me until I breathe my last breath.

On the night of his demise, Bashir had called to announce the very shattering news. Ironically I had randomly thought of Chairman the previous night, without knowing that this news would be broken to me the next morning. The room was extremely cold, yet I woke up to a shirt drenched in sweat, perhaps it was the sign. I sprung up and prayed it was all a dream, alas it wasn’t, Chairman had left us, life is indeed transient.

Adieu Chairman, indeed a formidable backbone is gone — we are grateful for the opportunities you gave us, and our thoughts and prayers are with your lovely wife, Zainab Nda-Isiah, kids, the Nda-Isaiah clan, praying God gives mama the strength to handle this. I still fervently remember your dance with her on your birthday. It is with a heavy and broken heart that I pen this tribute. Until we meet again, be rest assured that the marathon continues as you smile at us, Chairman.

Your legacy would forever remain deep inside our hearts. Thank you for being a great leader and friend. 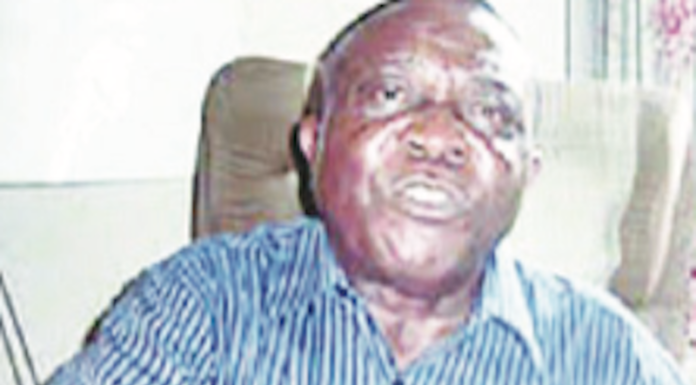