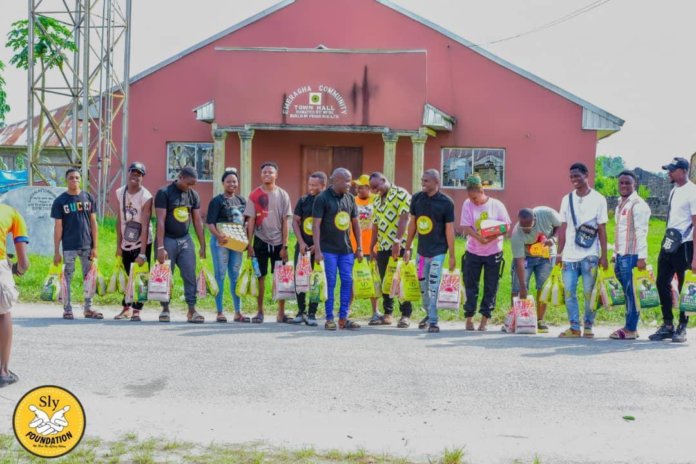 There was relief for in the people of Emeragha and Omavovwe communities in Urhobo land, Delta State, when a non-governmental organisation, Sly Foundation, took to the streets to give food items to over 200 families.

The foundation which is reputed for giving to charity held the event recently, as beneficiaries were drawn from the two communities.

Speaking, the Founder of the Sly Foundation, Sylvester Omobor, who hails from Agbarha in Ughelli North Local Government Area, took to the streets, alongside ace comedian Whalemouth, as well as many other friends and associates of the The Sly Foundation.

”Amidst the challenges that came with 2020, we are here to say that The Sly Foundation felt the pulse of the common man and woman, boy or girl in our society.
”It is with this great purpose that we, at The Sly Foundation, on December 24, 2020, decided to once again put joy and laughter on the faces of the old, needy and impoverished in two Delta State Urhobo communities — Emeragha Community and Omavovwe Community — both in Ughelli North, Delta State.

”First, at the town hall in Emeragha Community from the town hall, we met an indigene of the community, told him our purpose and volunteered to lead us to all the very old and needy. We headed to the homes of the very old and impoverished, sharing bags of rice and tomatoes and every home had a reason to smile and give thanks to God, courtesy of The Sly Foundation Christmas Outreach.

“Nothing is as soothing as when the very old prays for you as most of them expressed their gratitude in prayers; some in hilarious exclamations.

From Emeragha, we walked down to the next which is Omavovwe community and the gestures were nothing less than the former.

The foundation made sure that the 200 homes we touched have a reason to celebrate this festive season,” Omobor said.

The annual event is committed to providing, volunteering, and supporting the less-privileged in the society.

On why he decided to set up a foundation to help the have-nots in the society, the founder said: “I decided to setup a foundation and help the less privileged during this period also because I’ve been in the state of not having what to eat or drink. I know how it feels when you don’t have. This festive season is incomplete if love and smile is not on the faces of those around us.

“My daily mission is simple: To put food on the tables of our hungry neighbours and get more people out of poverty and problems. Giving is not determined by how much you have but how much your heart truly desires to sacrifice. There are people who will starve to death today. There are people who have to eat mud pies daily. We don’t truly understand how blessed we are to feed the poor and help people who are in need. Feeding the needy is part of serving one another.”

Lending his voice to the show of care for the low and destitute, comedian Kevin Usiaphe, popularly known as Whalemouth, who is the ambassador of the foundation, lauds the founder, while explaining the rationale behind the show of love.

“It is heartwarming to see Nigerians that have not yet given up on the country. There’s one absolute truth we can all agree on about this country. The country has been failed time and again by people in real positions of power to do something about its decay that it’s easy to completely lose all hope in the country. However, there are people who are not giving up just yet; people who still battle to protect the little flicker of hope in the pervading darkness that the country struggles in.

“Omobor Sylvester, popularly known as Sly, is only another average Nigerian who decided that he had had enough with the government’s system of willful neglect and disappointment and was intent on doing something about it. Sly had experienced hardship first hand, growing up in a ghetto. The things he was exposed to growing up inspired him to do his part to make sure he could prevent other people having to suffer through the same. This led to what is known today as Sly Foundation.

“Sly came up with the idea for the foundation, on his birthday, two years ago, and with the help of his like-minded team, kicked off the non-profit organisation’s operation in March 15 by going on outreaches to destitute homes, feeding the young, the poor, the old, the lonely and the homeless who struggled to feed themselves with the worsening economic situation of the country.

Sly believes that you don’t have to possess the world before you can start to think about your neighbour, and this selfless thought is what drives him to cater for as many people as he can; who are vulnerable to hunger and poverty that continues to be on the rise in the country.

”The foundation has successfully carried out outreach programmes across all South Western states of the country and in Abuja.

“The full extent of the problem of hunger is not obvious to most of us. We only see the homeless, but there are a great number of working poor, struggling to survive, who don’t have enough money to put adequate food on the table. We must find a solution to this ever-increasing problem — and quickly.

“The Hunger Heroes of Sly Foundation don’t just cater to the stomach; sometimes, they also render financial assistance to people who are struggling financially if a request is deemed as genuine and it is within their means to help.

”If Sly Foundation’s advocacy has taught us anything, it is that no help is too little to render, and that as Nigerians, we can help this country grow in more ways than we think we are capable of. Like Ronald Reagan said, “Those who say that we’re in a time when there are no heroes, they just don’t know where to look. Sly Foundation should inspire us all,” he said.