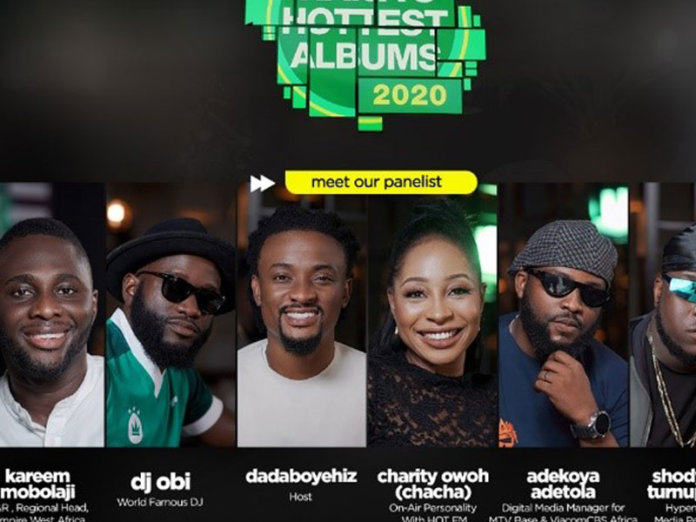 The special MTV Base Roundtable, an annual entertainment show which brings together the most versatile media personalities in Nigeria to discuss the hottest topics and trends in the music industry will premiere on Saturday, December 19th, exclusively on MTV Base (DStv Channel 322; GOtv Channel 72) at 18:00 WAT / 19:00 CAT / 20:00 EAT. On the show this year, the panel will be reviewing the #mtvbasehottestnaijaalbum of 2020 and the impact artists have had on the music industry.

Commenting on the initiative, Solafunmi Oyeneye, Senior Channels Manager at ViacomCBS Networks Africa said, “The MTV Base Roundtable comes at no better time than now. We are delighted to have some of the industry’s finest and respected media personalities on the panel, critiquing the selected music albums for 2020. Artists and fans should look forward to experiencing an intense moment of evaluation filled with excitement and sparks, as our panel appreciate artists ingenuity and creativity. We also hope that artists are encouraged to be and do better”.

“Even though 2020 has been an unprecedented year, and how the pandemic impacted the entertainment industry, notwithstanding, it has also created a surge in creativity and informed a rethink in the industry that led to the compilation of powerful music and content in 2020.” Solafunmi added.

With albums such as Tiwa Savage, “Celia”; Burna Boy, “Twice As Tall”; DJ Cuppy, “Original Copy”; and Davido, “ABT”, among others are being considered, it is guaranteed that this years’ discussion will be heated with the concluding selection evoking strong emotions and excitement from artistes and fans. The criteria for selecting the top albums of the year includes; impact, streams, buzz, appeal, and longevity of the albums. In addition, no album released after November 2020 will be considered for the list.