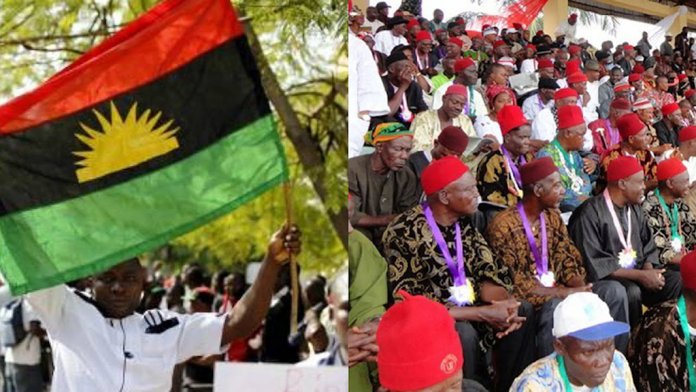 Apex Igbo cultural organisation, Ohanaeze Ndigbo Worldwide has debunked what it called another misinformation issued by the South-east Muslim Organisation of Nigeria (SEMON) and the Igbo Muslim Forum alleging the killing of Igbo Muslims in Igbo land.

A statement signed by Chief Emeka Attamah, Special Adviser, Media and Publicity to President General, Ohanaeze Ndigbo, said the organisation finds ceaseless insinuations that the Igbo are against Muslims or the North very worrisome because of their grave socio-cultural and religious implications for the nation.

Outlining the details, the statement reads: “First it was Northern Elders Forum (NEF) in their unguarded and spurious gaffe which happily has been debunked by the majority of Northern Leaders as an unbecoming and untrue statement.

This time, SEMON is saying that Muslims and mosques were deliberately targeted by the Indigenous People of Biafra (IPOB), especially during the #ENDSARS protest.

The statement jointly signed by one Suleiman Afikpo and Muhammad Amachi, alleged that there was a deliberate attempt to hound Muslims from the southeast into silence while Ohanaeze Ndigbo and the South-east governors look the other way.

The truth is that there has never been any report of even harassment let alone killing of any Muslim made to any group or government. No such report has ever been received.

The Igbo are law-abiding and recognize and respect the freedom of religion enshrined in the Nigerian constitution.

It is interesting that in the very words of the claimants; “Islam has existed in Igbo land since the early 19th century it just appeared in the region. It has peacefully been propagated and boasts of occupying the second largest and widely accepted religion in the present Ala- Igbo.

“From inception till date, Islam and Muslims of Ala-Igbo have maintained peaceful co-existence and its presence has not endangered the well being of Ndigbo.”

The big question now is when did this situation change? When did Ndigbo become intolerant of Muslims in their midst?

Also, the allegation of two mosques being destroyed at Nsukka is another bundle of lies. There was an altercation, not religious intolerance or aggression which has since been resolved.

The rapidity at which these baseless and unfounded allegations about the Igbo hating the North is becoming redoubtable and alarming and is suggestive of a clandestine gang up to discredit the Igbo and make them unacceptable to the North in the build-up to the 2023 presidential election.

This situation is unfortunate considering the sacrifices Ndigbo has made and are still making for the development and unity of the country.

Ndigbo cannot antagonize anybody from any part of the country knowing full well that they are more itinerant and settle in all parts of the country than any other ethnic group.

Evidently, there is a vicious and subterranean plan to scuttle the current momentum that the quest for a president of Igbo extraction is fast gaining.

It is sad and regrettable that the North which had always been a political ally of the East is being used to fan this ember of hatred for Ndigbo.

Just like the first smear campaign by the Prof. Ango Abdullahi group backfired, the current one will also be unmasked as an empty ploy to sabotage the interest of the Igbo.

If not, let them adduce evidence of their claim.

Ndigbo has always been hospitable and accommodating hosts to their visitors and cannot change overnight.

They also recognize the inevitability and political sagacity of building bridges for the attainment of their national political ambitions.”