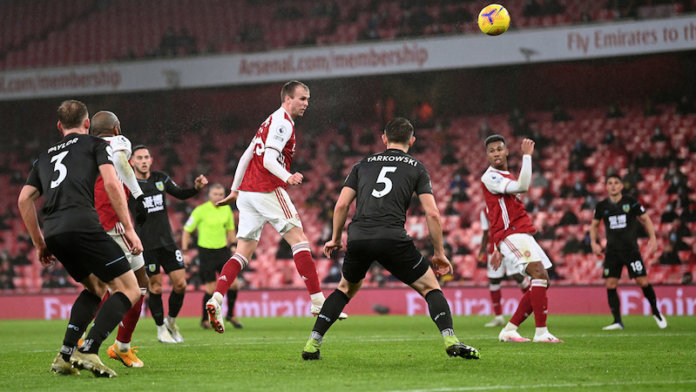 An own goal by Pierre-Emerick Aubameyang saw 10-man Arsenal lose 1-0 to Premier League strugglers Burnley at the Emirates.

It was a first win at Arsenal for Burnley since September 1974. The Clarets had lost their previous nine visits to the Gunners in all competitions (including all six in the Ppremier League).

The Defeat meant Mikel Arteta’s side have now lost four straight league games at home for the first time in 61 years.

Arsenal’s bright start in the second half was undone after Granit Xhaka was dismissed on 58 minutes for grabbing the throat of Clarets midfielder Ashley Westwood.

The Swiss midfielder sent off after referee David Coote reviewed the incident on the pitch-side monitor.

Burnley took advantage of the sending off and scored in the 73rd minute through an own goal by Pierre-Emerick Aubameyang.

Burnley’s victory lifts them out of the relegation zone, a point clear of Fulham, while Arsenal stay in a lowly 15th place.