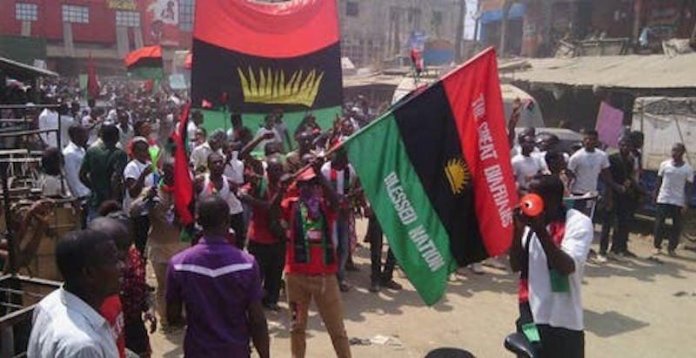 Eight members of the proscribed Indigenous People of Biafra (IPOB) who hailed from Ebonyi State have been arrested by the Delta State Police Command for allegedly burning down the High Court Complex and other public structures at Koka Junction, Asaba, capital of Delta State, during the #EndSARS protest in October this year.

Parading the IPOB members alongside 103 other criminal suspects yesterday in Asaba, the State Commissioner of Police, Mr. Hafiz M. Inuwa, said that the suspects who are also residents of Asaba pepetrated acts of violence under the guise of participating the #EndSARS protest, including torching several public structures.

Inuwa gave the names of the suspects alleged to be members of the IPOB as 18-year old Igwe Tobechukwu, Chidera Chukwu (20 years), Chukuebuka Aweke (20 years) Emmanuel Arigon (22 years), Chidoke Nwankwo (20 years), Obima Ebuka (20 years), Nwafor Joshua (20 years), and 20-year old Esther Chukwu, who is the only female member of the secessionist group arrested by the police.

Inuwa said that a tricycle belonging to one of the suspects, which was used in conveying used tyres and petrol to the scene of the crime and a Nokia mobile phone snatched from a passerby were recovered.

He also said that one Lucky Felix of ‘Mile 5’ in Asaba, who confessed his involvement in the burning of Akwofor Police Post, the High Court complex and other atrocities during the #EndSARS protests, was arrested with a gun and two cartridges stolen from the burnt court store with the court’s exhibit registration number still on them.

Also arrested by the police in Delta State were another three suspects including one Lucky Ebhonun Godstime, who allegedly sold his four-year old son last year to one Ebere Frank, a.k.a. “Chairlady” at Agbor, Ika South Local Government Area, for the sum of N300,000 (Three Hundred Thousand Naira).

However, the alleged child buyer was said to have re-sold the boy to one Stella Ifeoma Adiegwu in Onitsha, Anambra State, for N750,000 (Seven Hundred and Fifty Thousand Naira), Inuwa said, adding that the boy, Daniel, now five years old, has been rescued and taken to an orphanage for care and custody.

He disclosed that “proactive and relative crime preventive mechanisms” were used to arrest and foil kidnapping, robberies and other criminal activities across the state during the period under review.

Similarly, one Mr. Joseph Afia of Mereje Community was reportedly arrested with a sack containing suspected dry human skull and bones at Egborode in Okpe Local Government Area of the state, the police commissioner said, adding that the suspect told the police that he exhumed the human parts from a cemetery.