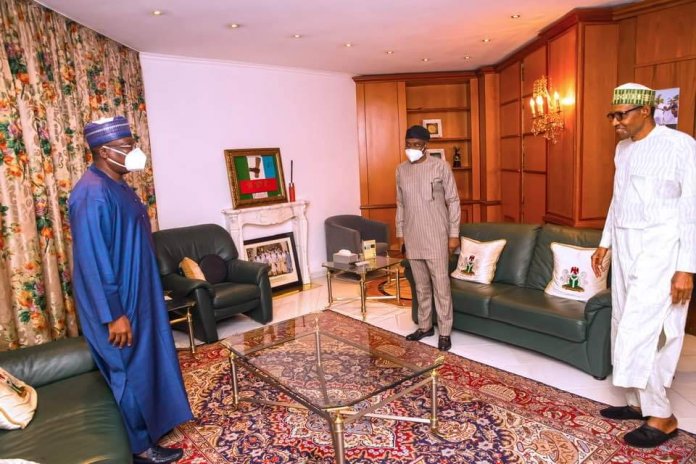 Last week, following killing of over 43 rice farmers in Borno State, the Senate for the umpteenth time, called for the sack of service Chiefs, while the House of Representatives invited President Muhammadu Buhari to explain the state of security in the country, report Adedayo Akinwale and Udora Orizu

THe recent gruesome killing of 43 rice farmers in Zabarmari community in Jere Local Government Area of Borno State, by the Boko Haram insurgents, again got the attention of the National Assembly as the country continues to battle mounting security challenges, which are threatening its foundation.

Expectedly, the long hours of considerations in both Chambers of the National Assembly generated heated debates and resolutions were reached as usual. It is worthy of note that similar resolutions had been reached earlier in the recent past, where the legislators called for the sack of the Service Chiefs, but President Muhammadu Buhari’s trust in them has not waned.

Nevertheless, the debate on the floor of both Chambers last week saw the Senate, for the third time, calling for the sack of Service Chiefs, while the House of Representatives dared the President and asked him to appear before the Green Chamber to explain why his administration is bent on surrendering the country to the criminals.

The Senate, for the second time on December 1st, asked Buhari to relieve all the service chiefs of their appointment and replace them with new ones with new ideas and solutions. The resolution of the upper chamber was sequel to the adoption of a motion moved by Senator Kashim Shettima on the recent killing of farmers in Borno State.

The Senate also called on the president to take immediate steps to restructure and remodel the country’s security architecture and provide enough modern weapons and equipment to effectively combat the insurgents.

The Senate urged Buhari to probe allegations of corruption and leakages within the security agencies and to foster transparency and ensure all resources deployed for security are spent on the needs on the ground.

It asked the federal government to explore multi-lateral partnerships with Nigeria’s neighbours to find a lasting solution to the insurgency, and called for the recruitment of 10,000 Civilian JTF as well as massive recruitment into the military and the police.

Shettima had while leading the debate said the Nigerian Army, in conjunction with other security agencies, had not been able to quell the insurgency affecting the Northeast in spite of the slogan by government officials that the insurgents have been technically defeated.

Also speaking, Chairman, Senate Committee on Army, Senator Ali Ndume, said his earlier findings in Borno showed that soldiers at war in Northeast were sharing ammunition and that some of them were without a helmet and bulletproof, saying aside from the lack of deployment of modern military equipment, there was no coordination among the security forces.

Ndume said the Senate must take a step forward on its resolutions, asking Lawan to give Buhari a timeline to implement the resolutions.

Contributing, Senator Babba Kaita, said while the president is doing his best, “his best is not good enough if residents cannot see the result on ground.” He also called for an investigation into how the funds allocated to the military is being spent.

On his part, Senator Adamu Aliero tackled the president for sending a delegation to Borno State instead of going there himself. He also said the current service chiefs have “outlived their usefulness.”

Senator Opeyemi Bamidele however decried the repetition of resolutions in the Senate.

He said: “The only new thing we are saying here is that more people have been killed in a very gruesome manner. I will urge us to stand on existing resolutions.

“It is time for Buhari to let the service chiefs go. They have done their best but they need to go. If he cannot remove them, he should constitute an advisory committee and put them there. They will still be advising him. If he won’t let them go, we call on them, in overriding public interest, to resign.”

The President of the Senate, Dr. Ahmed Lawan, who presided over the session, lamented the recent killings and described it as one death too many

According to him, “we should not be despaired that nothing has happened to our earlier resolutions.”

From the House, a Special Invitation

Members of the House of Representatives, same day, after an hour of heated arguments, finally resolved to invite the president to appear before them and offer explanation on the security situation of the country.

Moving a motion earlier, on behalf other 10 Borno State lawmakers at the plenary on Tuesday, Hon. Satomi Ahmed prayed the President to amongst others things, declare a state of emergency on security matters.

Ahmed lamented that the attackers tied up agricultural labourers working in rice field and slit their throats and that some of the victims were labourers from other states, who had travelled to work on the rice farm.

He said the exact number of people killed in the incident was not yet known as over 44 dead bodies were recovered and buried with six others with serious injuries and many more residents reported missing.

He prayed the House to condemn killing of the unarmed civilian farmers and observe a minute silence in their honour.

The lawmaker also prayed the house to urge the federal government to declare state of emergency on security in the North East and other parts of the country.

Hon. Ahmadu Jaha, one of the co-sponsors of the motion raised a point of order saying, a prayer was omitted.

Jaha said in the original motion, all the sponsors agreed that Buhari should be invited to brief the House on the true state of the security of the nation but was removed, adding that he’s shocked by the removal.

He said he risked his life several times and wants it to be on record and in the hearts of his constituents, that he was not silent on the insecurity of the region.

While his amendment got overwhelming support from other lawmakers, the Speaker of the House, Hon. Femi Gbajabiamila and the majority leader Hon. Ado Doguwa were of the opinion that it was not necessary as security issues can’t be discussed openly, pleading for the understanding of his colleagues not to summon the president.

Gbajabiamila said inviting the president to the floor might not be the best way to go, saying there were other ways to engage. He said the prayer calling for a state of emergency on insecurity allows for far reaching decision and was enough to address the many demands of the region.

Doguwa, on his part, said every member of the house was in support of the motion, but that security issues should not be discussed in the open.

The House soon became very rowdy when Hon. Shehu Koko rose to corroborate the position of the majority leader.

Their contributions were greeted with shouts of ‘No’, from majority of the lawmakers, who insisted that the President must appear on the floor and address the security situation in the country.

Gbajabiamila, in an attempt to calm the very rowdy session ruled that plenary be suspended and members go into an executive session to resolve the matter.

Reconvening after an hour from the closed-door meeting, Jaha, who earlier insisted on the invitation as the key prayer of the motion, was asked to formally move the motion for the President’s appearance.

The House, however, did not specify on the day or time of the President’s appearance.

But on December 2, the Speaker said President Buhari has pledged to honour the invitation from the lower chamber to explain what he has been doing about the rising wave of insecurity in the country.

He told State House reporters in Abuja, after leading a delegation to a meeting with the president, that they came to convey the resolution summoning him to appear before it.

Gbajabiamila said aside from conveying the resolution to the president, they also had the intention of fixing a date for his appearance.

He said: “We came to see the president on developments in the country. He was so willing to listen as typical of the president – the usual democrat that he is. What we basically sought was to convey the resolution of the House and to fix a date, which we did not fix out of respect for Mr. President and his very tight schedule since we don’t know what date will be convenient.

Asked what was his perception of the president’s handling of security threats ravaging the country was, Gbajabiamila said the president was concerned about the worsening insecurity.

He said he would, however, avoid pre-empting the president until he appears before the House.

According to him, when Buhari appears before the House, he would not be there to address only the lawmakers, but will use the platform to address the country.

“I think he is more concerned than me and you. Uneasy lies the head that wears the crown. We will leave everything until when he comes to the House. Let me not pre-empt him. All I can tell you for now is that he is fully committed to the security of lives and property of Nigerians,” Gbajabiamila said.

Meanwhile, the spokesperson of the House, Hon. Ben Kalu, on Thursday revealed that Buhari is likely to appear before the House next Thursday to rub minds and proffer solutions to the insecurity challenges in the country.

Kalu, while addressing journalists in Abuja, clarified that the President was never summoned by the House, but was only invited so that they could rub minds and seek better ways of tackling the insecurity in the country.

But Nigerians are already used to the resolutions passed by the National Assembly on the security situation of the country and are almost certain that the President would take the resolution with a pinch of salt in his usual characteristic manner. Whether the service chiefs remain or are relieved of their duties still remain to be seen. The President’s body language appears calm even as the country burns.