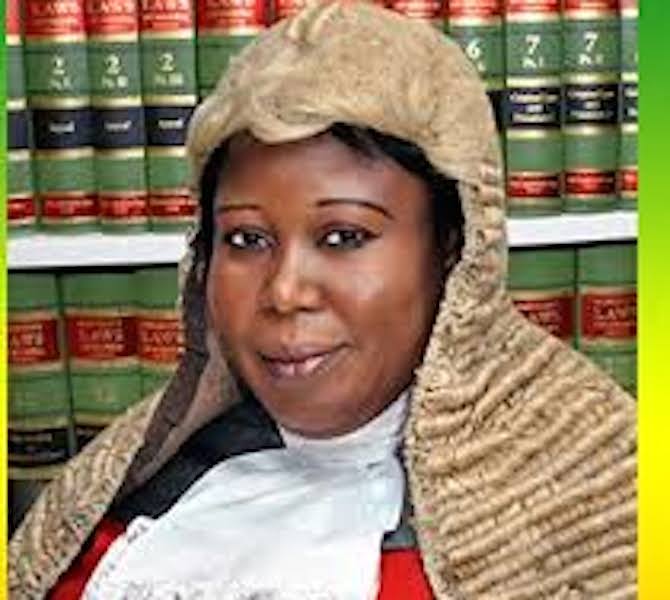 The most senior judge in Gombe State, Justice Beatrice Iliya, has been excluded from the nominees to fill the vacant position of the Chief Judge of the state for being allegedly being a Christian.
It was gathered that Iliya’s name was removed from the list by Gombe State Commissioner for Justice and Attorney-General, Zubairu Mohammed Umar.

The source said: “Umar deliberately refused to nominate Iliya for the position because of her religion. He has the backing of the state government as they believed the CJ should come to the other religion.
“They deliberately refused to nominate her because they know that if her name is there, as the most senior and most qualified, the National Judicial Council will pick her over others.”

In a petition to the National Judicial Council obtained yesterday, Justice Iliya questioned the rationale behind the removal of her name despite being the most senior judge and having served as an Acting Chief Judge in the state.
She highlighted the faulty process, procedure and criteria used by the Judicial Service Commission in the assessment and selection of the shortlisted candidates.
She explained that the head of the JSC nominated himself and another junior colleague while excluding her name without any reason.

The petition reads partly: “The HAG proceeded to preside over the meeting and to present his memorandum in which he proposed to the JSC that Hon Justice Mu’azu Abdulkadir Pindiga, Ag. CJ/ Chairman JSC and Hon. Justice Joseph A. Awak should be shortlisted as preferred and reserve candidates respectively for the purpose of appointment as Chief Judge of Gombe State.
“The HAG’s proposal in the memorandum, although he acknowledged my seniority over the shortlisted judges; my unblemished record; and my being eminently qualified for appointment as CJ; nevertheless, went further to justify my exclusion from the proposed shortlist.”

Faulting the nominations, Iliya said the record of performance of the two judges as acting chief judges that influenced the Attorney-General’s view was not presented to the JSC at the meeting.
“The JSC therefore took its decision based solely on the personal, unverified opinion of the HAG and not on any objective evidence, acceptable or known, recognised criterion guiding the selection, shortlisting of candidates for appointment to the office of CJ,” she added.

She argued that the office of the Attorney-General has no oversight powers over the judiciary or judicial officers generally adding that the attorney general “is not in a position to assess and competently grade the performance of judicial officers, more so that he had not yet assumed his office as HAG when I was appointed and acted as Chief Judge from 1st September, 2019 – 4th December, 2019. He only became HAG on 9th December, 2019.”

She also noted that the state’s Attorney-General did not place before the JSC any material or evidence to support his opinion, nor did the JSC wait to receive the mandatory reports and comments of former head of court’s, NBA Chairman, DSS report, certificate of medicate fitness and CVs of the shortlisted candidates as require by the NJC rules.
She prayed that NJC not only reject the advice of the Gombe State JSC, the shortlisted names and set aside the whole exercise and process that led to the said advice but also direct that a fresh, transparent and objective exercise, consistent with the NJC and settled practice and procedure be carried out by JSC to determine suitable candidates for the appointment of Chief Judge of Gombe State.

“The NJC on the strength of the material before it should direct that the objective and transparent process of appointing a CJ for Gombe State, commenced by the erstwhile CJ of Gombe State Hon. Justice H. Y. Heman be completed,” she added.
Also, the Centre for Public Accountability, CPA, in a petition to the NJC urged that the criteria for the appointment of chief judge of a state should not be jettisoned for ethnicity and religion.

Executive Director of CPA, Olufemi Lawson wrote: “It is sad, that the Gombe State government has continued to disobey the 11th August 2020 directive of your noble commission, directing the Gombe State Judicial Service Commission to re-submit names of nominees for appointment as Substantive Chief Judge of Gombe State, by doing the right thing of including the name of the most senior judge of the Gombe State High Court of Justice.

“While we strongly believe in the commitment of the NJC, towards protecting the sanctity of the judiciary and by extension, our democracy, we are disturbed by the worrying tendency of some state governments, to truncate the seniority hierarchy in the appointment of Chief judges.

“The recent cases of Kebbi state involving Honorable Justice Elizabeth Karatu and that of the Cross River State, where the governor arbitrarily prevented the appointment of Justice Akon Ikpeme, before the intervention of your great commission, are just a few that we wish to remind you.
“We believe that the NJC, will in the present situation stand firmly to be seen as being fair to all, and reject the impression, that it is leaving our women judges, to be vulnerable to political manipulations and machinations of these States executives.”