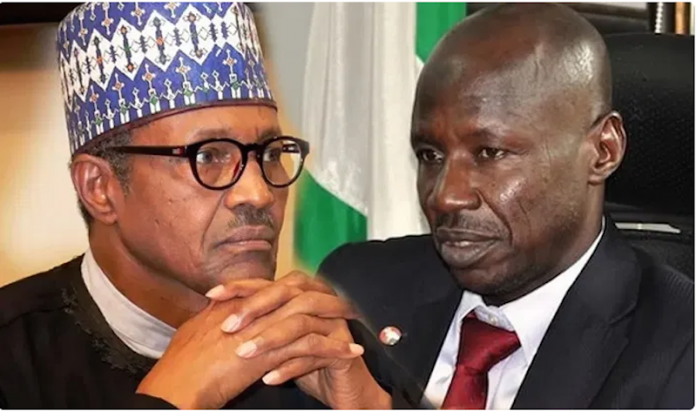 President Muhammadu Buhari has set up a four-man committee to review the report of the Justice Ayo Salami-led judicial panel of enquiry into the tenure of the suspended acting Chairman of the Economic and Financial Crimes Commission (EFCC), Mr. Ibrahim Magu.

The committee, according to TheCable, will produce the White Paper on the probe report which recommended the removal of Magu as EFCC boss and his prosecution over allegations of corruption in the management of recovered assets.

Magu has denied any wrongdoing and maintained that he discharged his duties honorably as the nation’s anti-graft czar from 2015 to 2020.

The setting-up of the panel is coming amidst allegations that the Attorney-General of the Federation (AGF) and Minister of Justice, Abubakar Malami, who initiated the probe with a petition to Buhari, had an undue influence on the Salami panel.

He was accused of teleguiding the panel and instigating the suspension of several EFCC officials thought to be close to Magu without any queries or invitation for questioning.

Activists sympathetic to Magu have accused Malami of manipulating the process to achieve a pre-determined agenda, although the AGF’s media office has often dismissed the allegation.

The newly set up committee is made up of two representatives from the office of the Chief of Staff to the President and another two from the Office of the Secretary to the Government of the Federation.

Salami has been going to the presidential villa to shed light on the gaps in his panel’s findings.

The conclusion of the review committee will lead to the White Paper on the probe.

He was accused of illegally ordering the detention of Magu in July, a development that created friction between him and the deputy chairman of the panel, Anthony Ogbizi Michael, a deputy inspector-general of police who was not happy that a senior police officer was treated “in such a manner”.

Magu is a commissioner of police.

His lawyers also complained that he was denied participation in the initial stages of the proceedings during which the panel took evidence from several witnesses and admitted several exhibits in his absence “in violation of constitutional provisions”.

They also contend that oaths were not administered on all the witnesses who gave evidence before the commission of inquiry throughout its sittings.

In July, the Code of Conduct Bureau (CCB) was preparing charges against Magu