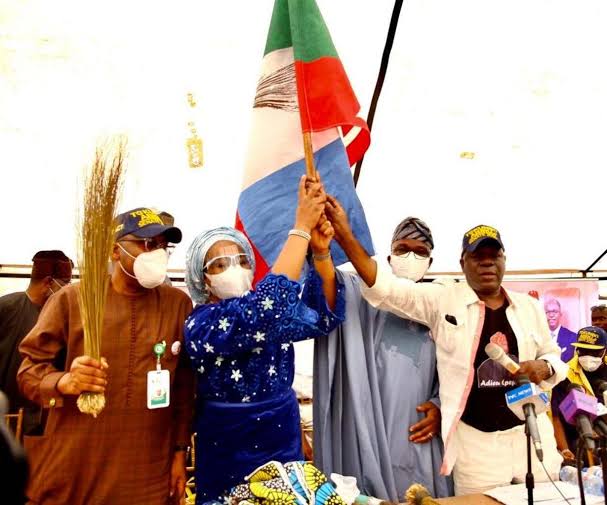 The candidate of All Progressives Congress (APC) for the December 5 bye-election in Lagos East, Mr. Tokunbo Abiru Tuesday rounded off his campaign with a pledge to serve the people of the senatorial district with integrity and commitment.

Abiru, a former Executive Director, First Bank Plc and the immediate past Chief Executive Officer, Polaris Bank Limited, also said he would team up with the progressives in the National Assembly to secure special status for Lagos and further devolution of powers to the federating units.

He made these promises in a two-page closing message to the people of Lagos East in which he assured them of a new dawn in the history of legislative representation in the senatorial district if elected on Saturday.

In the message he titled “December 5 Offers Lagos East Fresh Hope,” Abiru promised to represent the people of Lagos East with commitment, integrity and passion, leveraging all the political and social capital he had acquired over three decades as an economist, chartered accountant, commissioner for finance and bank CEO.

The APC candidate disclosed that he would prioritise the welfare of his constituents in Lagos East in particular and Lagos State in general if they cast their ballots in his support and that of his party on Saturday.

In specific terms, he said: “I have assured the people of Lagos East, irrespective of their ethnic, political and religious affiliations, that I will use the office of Senator, and my energy and resources to further their well being, welfare, prosperity, empowerment and security.”

He, also, promised to establish and institutionalise an endowment fund to, within my capacity and resources, support the aged; protect the vulnerable; sponsor youth employability schemes; support women empowerment programmes and cater for indigent but brilliant students in all parts of the Senatorial District.

According to him, I have done this as a private citizen and will sustain and enhance such pro-people programmes as an elected Senator from December 5.

He said: “I have observed that the pressure on Lagos infrastructure arising from federal establishments like seaports, airports and military installations without statutory federal support is unfair and unacceptable.

“I have also noted that the massive rate of migration from different states of the federation to Lagos State has placed additional burden upon the Government and people of Lagos State,” he said.

The APC candidate, therefore, promised to join hands with his senior distinguished colleagues in the Senate and members of the House of Representatives from the state to sustain efforts to secure a special status for Lagos State

He justified his resolve to fight for special status for Lagos on the account of what he described as the strategic roles of the state as the nation’s commercial, financial, industrial, media and entertainment capital.

In view of the anomalies in the country’s federal structure, the APC candidate pledged that he would support the call for further devolution of powers from the federal government to the federating units.

He said: “In the light of these pro-people initiatives and positions, I strongly believe December 5 presents us a rare opportunity to elect a candidate that has the capacity and exposure to play the roles expected of a distinguished Senator of the Federal Republic of Nigeria.

“December 5, no doubt, presents fresh hope to elect a Senator that is a homegrown individual, whom our youths can look up to, learn from and believe as to the possibilities this country offers its young people.

On these grounds, the APC candidate noted that he would consider it “the greatest honour of my life if you, my people in Lagos East, find me worthy to represent you in the Senate on the platform of the APC.

Abiru, also, urge the voters “to turn out in large numbers on December 5 to elect me as the next Senator for Lagos East. The tenure of a Senator only lasts for a maximum of four years before he or she returns to the electorate for a fresh mandate.

“But I have, without any blemish, run a successful professional and public service career for 32 years. I will not at this stage of my life mess it up. I will never be the kind of person that you will only see during election periods.

“Rather, I will be a true representative that will periodically, either quarterly or biannually go back to my constituents to give account of what I have done; listen to get feedback from you and see what I can do to further your cause.”