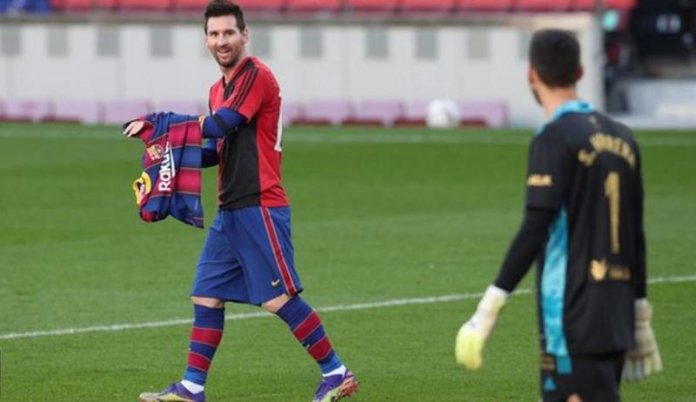 Lionel Messi paid a personal tribute to the late Diego Maradona after scoring on Sunday as Barcelona returned to winning ways in La Liga with a resounding 4-0 home win over Osasuna.

Messi adorned a brilliant team display with a thumping strike into the top corner in the second half, after Martin Braithwaite had broken the deadlock and Antoine Griezmann and Philippe Coutinho had scored either side of half-time.

The Argentine then lifted his shirt to reveal a red and black replica kit of his hometown club Newell’s Old Boys bearing the No. 10 which Maradona wore during his brief spell at the Rosario side in 1993.

The Catalans had paid homage before kick-off to Maradona, who played for the club in an eventful yet disappointing spell from 1982 to 1984, hanging a framed signed shirt of his above the presidential box while the players held a minute’s silence in front of an old Barca shirt bearing the No. 10.

Barca defender Clement Lenglet limped off with an ankle problem, leaving his side with no fit first-team centre backs due to injuries to Samuel Umtiti, Ronald Araujo and Gerard Pique.

The win followed Barca’s 1-0 defeat at Atletico Madrid last week and lifted them to seventh in the standings on 14 points after nine matches, nine behind leaders Real Sociedad and second-placed Atletico.