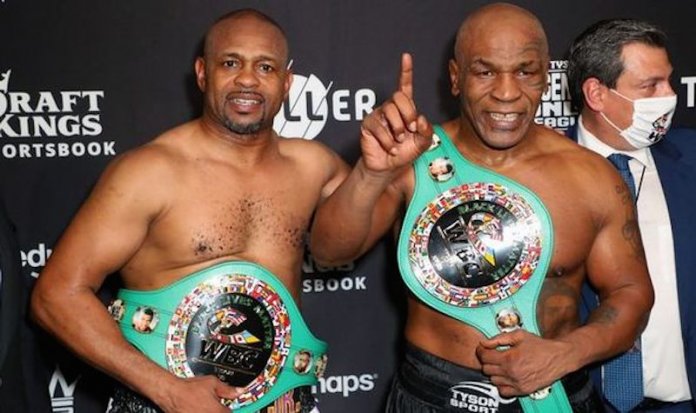 After Mike Tyson and Roy Jones Jr returned to the ring for a special exhibition bout on Saturday night in Los Angeles, it has tempted another legendary boxer to now dust off his gloves.

Tyson, 54, and Jones Jr, 51, battled it out to a draw in their eight-round exhibition fight, with ‘Iron Mike’ showing glimpses of his former destructive self while the latter displayed his strong defensive skills.

The ex-heavyweight pair proved age is just a number following their rigorous training regimes and speaking prior to their showdown, former undisputed world champion Lennox Lewis hinted he could now be persuaded to return to the ring.

Speaking about a potential comeback, Lewis told BT Sport: ‘Sure! I mean, it seems like a lot of fun.’

Lewis knocked Tyson out when the pair went head-to-head in Memphis back in June 2002 before retiring just one year later following a fascinating battle against Vitali Klitschko, in which the Brit came out on top.

Lewis’ career took off during the Seoul Olympics in 1988, where he overcame Riddick Bowe via knockout to clinch Gold at the Olympics.

It was thought that Lewis would meet American boxer Bowe in the professional ranks following their Olympics showdown but a fight never came to fruition.

And Lewis has admitted there is ‘unfinished business’ with Bowe, suggesting that a return could be in the pipeline.

‘People keep coming up to them and saying to them, “Hey, when is your next fight? Who are you going to fight?”

‘But it doesn’t do better for them, it makes them look bad. So I always elected to stay away from that.

‘But, if it is right, I may come back. There’s been talk Riddick Bowe wants to fight me still so there is still some unfinished business there.’