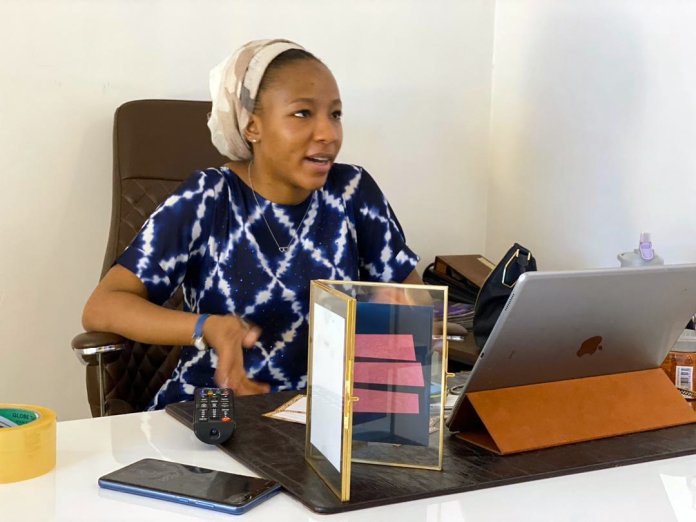 Olaoluwakitan Babatunde talks to Iman Al-Makura, daughter of business mogul, former two-term governor of Nasarawa State, and serving Senator, Umaru Tanko Al-Makura, who recently launched her fashion line called Simply Iman. When everyone expected her to land a juicy employment, as is common among the children of Nigeria’s rich and influential, having bagged a combined honours degree in Law and International Relations from the University of Sussex, United Kingdom, Iman says she has chosen a path for herself.

As you navigate through Yanlinga Street, off Adetokumbo Ademola, Wuse II, Abuja, then into the Sannar Street off Yalinga, in no time, you are at No. 3B of that street, a duplex in a posh and neat premises. Everywhere is so refreshingly calm. But for the show glass, which houses two elegantly dressed mannequins, nothing on the outside immediately gives you an idea that you are standing in front of a busy fashion house in the heart of Abuja.

But immediately you step into the reception, a boldly carved inscription, Simply Iman, greets you. Two young women in their early twenties, one the receptionist and another, who turns out to be the CEO of the fashion house, were on hand to receive this reporter and the cameraman for the interview.

“Welcome to Simply Iman, the young Al-Makura said, wearing a pleasant smile. Well-dressed (expectedly) and wearing the kind of humility that exudes confidence, you would not know she is the proprietress of the big fashion house, but then she adds, “I’m Iman Al-Makura, welcome to my world”. She spoke in a soft tone.
She takes this reporter and the cameraman on a tour of the fashion house, an ambitious project, one must admit, before leading us into her office for the chat.

“However, I have always had this innate passion for fashion. Even while in school, I knew I was not going to work for anybody. I never wanted to join the labour market. I had a clear-cut vision of becoming an employer of labour. I wanted to be a fashionpreneur. I started learning these things from the later part of my secondary school days. Again, while in the university, I continued from where I stopped each time I returned to Nigeria during the holidays. And here we are today”, she said.

Reminded that coming from a privileged background, she could still not have spent time in the job market as her family’s influence could have landed her a lucrative job upon graduation, Iman said her upbringing oriented her to work her way to success, not inherit it.

“Naturally, I abhour influence peddling and we were brought up that way. I prefer to work my way to the top. Truth is, I could probably have secured a job in a competitive process without anyone lifting a finger on my behalf. But as I said, I have my own path in life to follow. Again, as we say in Nigerian parlance, ‘Your papa money no be your own’. My parents have given me what every parent owes his or her child, which is education. It is now up to me to pursue my dreams.

“Besides, I don’t believe there is any job out there that could pay me better than Simply Iman and still give me the satisfaction and inner joy I get from this. I want to be independent and I want to build my own business empire gradually”, she explained.
Doesn’t her parents feel uncomfortable with the idea of their daughter making clothes for a living? Were there any discouragements from her siblings and friends? Iman said has been inspired and encouraged by them all.

Hear her: “My father is a very, very simple man. The same goes for my mother. And don’t forget that my father is a businessman. Politics is just something he got involved in along the line. His father too, that is, my grandfather was equally a renowned businessman. So, it runs in the blood somehow and my parents have inculcated the culture of industry in the family. So, I am only continuing in the family tradition and my parents and siblings have are very supportive and proud of me.

“It will also interest you to know that my mother, Dr. Mairo Al-Makura, was once into fashion. She set up one several years ago, before she divested owing to the shenanigans of the tailors, especially when her other businesses and offices did not give her the opportunity to give it the full attention she wanted”.
Would Iman sacrifice her fashion business for love or marriage? Hear her: “No way. If you love me, then you have to love my business. You are going out to look for what the children will eat. I am also going out to make some money for the family. Fold my business for marriage sake? No way.
Iman is happy with patronage, which she said has been quite good.

“I must say that I am very grateful to God. The patronage has been quite good. And we are not really advertising. We are just on Instagram. Our customers keep coming back and they return with new customers. That way, we have been growing. And these include quite some influential people too and we are happy and feel quite privileged clothing them”, she enthused.
To complement what they do at Simply Iman, she said they are also into accessories, fragrances, including local fragrances from Chad and Moroccan soaps.
On where she sees her business in the next 10 years, the fair-skinned entrepreneur said she was confident Simply Iman would go places.

“I’m sure you know a lot about how many global brands of today started yesterday. Take Apple for instance. It began in a garage. Amazon is currently worth over $225.2 Billion and employs over a million people today. But we all know how it started. Mark Zuckerberg started Facebook from his dorm room in Harvard in 2004. See where both Mark and Facebook have grown. Larry Page and Sergey Brin started Google in a garage. Today, it is the world’s leading search engine. The Disney brothers, Walt and Roy, started The Walt Disney Company in the back of a small apartment in Los Angeles.

“One can go on and on. But to answer your question directly, I see Simply Iman going places. I see us going for fashion shows in Nigeria and overseas. I see us taking a huge chunk of the fashion business. The sweet thing is that the driving mentality and forces behind Simply Iman are youthful fellows, who are also daily learning from older and more experienced minds. More than the money we earn, is the satisfaction we get each time our customers call or come around to tell us how they liked our product, and how friends pester them to bring them to Simply Iman. This customer satisfaction is what gives us the confidence that we will keep growing and that we will go places.

“But I know that things evolve at breakneck speed in our contemporary world and the fashion industry is no exception. That is why the philosophy here is training and retraining. Personally too, I have had a stint with Kathy Anthony fashion house here in Abuja. But I will keep learning more. To hone my entrepreneurial skills too, I hope to go to the Lagos Business School and someday soon to Harvard”, she added.

I hope too didn’t just happen. I started gradually, putting things together until we fully opened shop here. I’m happy that you have toured our fashion house. You could see that our staff are all young men and women. With every sense of modesty, our workers and clothes we make here can compete favourably anywhere in the world. But one has to start from somewhere and I’m glad I did.