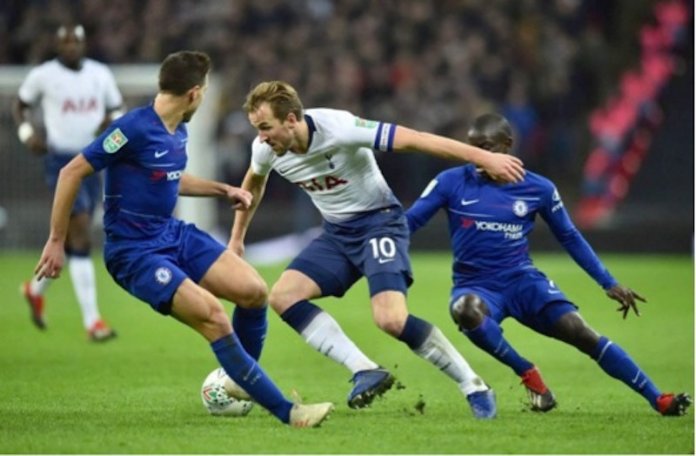 It would be battle between the master and his boy as Frank Lampard’s Chelsea welcomes former boss, Jose Mourinho to Stamford Bridge in a table-topping encounter
Jose Mourinho takes his table-topping Tottenham side to former club Chelsea this weekend determined to prove he is back where he belongs at the top of the Premier League.

Four straight wins have taken Spurs to 20 points after nine games, ahead of Liverpool on goal difference, but Frank Lampard’s Chelsea are just two points behind them.
Spurs boss has a point to prove against Lampard, with whom he won two Premier League titles at Stamford Bridge.

Mourinho and the former Chelsea midfielder-turned-manager have met four times in different dugouts.
Lampard gave Mourinho a bloody nose when his Derby side dumped Manchester United, then managed by the Mourinho, out of the League Cup on penalties in 2018.

After returning to Chelsea as manager, Lampard twice outwitted his former boss, by now in charge at Tottenham, in the Premier League last season.
The 57-year-old veteran will be hoping this season’s League Cup win against Chelsea on penalties has turned the tide. He has never lost three consecutive league matches against the same manager or club before.

Mourinho was keen to play down title talk after last week’s impressive 2-0 win at home to Manchester City, which took them top.
“People cannot expect us to come here and after one season we are fighting for the title,” he told the BBC.

“We are not fighting for the title, we are just fighting to win every match. But we are going to lose matches, we are going to draw matches.”
But, like it or not, Spurs are in the title mix and will have to get used to the pressure, which will be ramped up on Sunday.

A former Stamford Bridge favourite, Craig Burley however thinks his old club will finish the season above Spurs, despite Mourinho’s side topping the early standings.
Chelsea are a “much more talented team” than Tottenham, according to Burley, who says the Blues were more likely to mount a title challenge than their London rivals.

Mourinho is being tipped to bring the Lilywhites’ long wait for silverware to an end come May, having added a steely resolve to the squad which had been lacking before his arrival in November 2019.
Chelsea, meanwhile, are being billed more as dark horses for the top-flight crown than outright contenders, despite having just extended their run of successive victories in all competitions to five by beating Newcastle 2-0 at St James’ Park.

However, Burley has rejected the notion that the Blues were playing catch-up to Tottenham in terms of their ability, with it his belief that Lampard now has a squad full of world-class talent at his disposal following an extensive summer recruitment drive.
Asked if his old club will finish above Spurs come May, the former Chelsea midfielder told ESPN: “Oh yeah. I think Chelsea are a much more talented team than Spurs. Tottenham have a good squad but Chelsea have an unbelievable amount of attacking players.

“They got great experience in with the signing of Thiago Silva, they’ve got a natural left-back in Ben Chilwell. The rise of Reece James has been meteoric – he’s taking his game to a new level.
“They’ve strengthened their goalkeeper situation and Frank Lampard has mentioned that N’Golo Kante is looking like the player he was a couple of years ago.
“I just think Chelsea have better options than Tottenham. They’re in as good shape as they can be to mount a title challenge.”

Chelsea will benefit from an extra two days rest before playing Tottenham, who were back in Europa League action against Ludogorets on Thursday.
Meanwhile, champions Liverpool travel to Brighton today, while goal-shy Manchester City host Burnley in the unaccustomed position of 13th in the table and Arsenal seek a win to lift them out of their slump.
Arsenal’s indifferent start to the season has left them languishing 12th in the Premier League table, with just four points from their past five matches.

Mikel Arteta, whose side host Wolves on Sunday, remains optimistic despite his side’s poor run and struggles in front of goal — Arsenal have now not scored from open play in five Premier League games.
“When I see the young talents we have got here and the future that we can produce for them, it’s things that get me really excited,” he said.

“We know that we are going to go through difficult periods because you don’t change issues that have been going on for years in a small amount of time.”
Fans have been patient so far with their manager, who arrived late last year, but will start to get edgy unless they see an upturn in results soon.
Manchester City, who host Burnley on today, have not scored more than once in a Premier League match since September.

It was the same old story last weekend. City had 22 shots in their 2-0 defeat against Tottenham, who mustered just four shots, with two on target.
The club’s record goalscorer, Sergio Aguero, had a brief runout in Wednesday’s 1-0 win at Olympiakos as he makes his way back to fitness following a hamstring injury.

City boss Guardiola said this week he was being cautious with the Argentine striker.
“We have many, many games to play this season and we’ll need him,” he said. “What we want is him to recover in his best condition.”
But it is a difficult balancing act for the manager, whose side are already eight points behind Spurs and Liverpool.

How to Start Your Cryptocurrency Trading in 2021