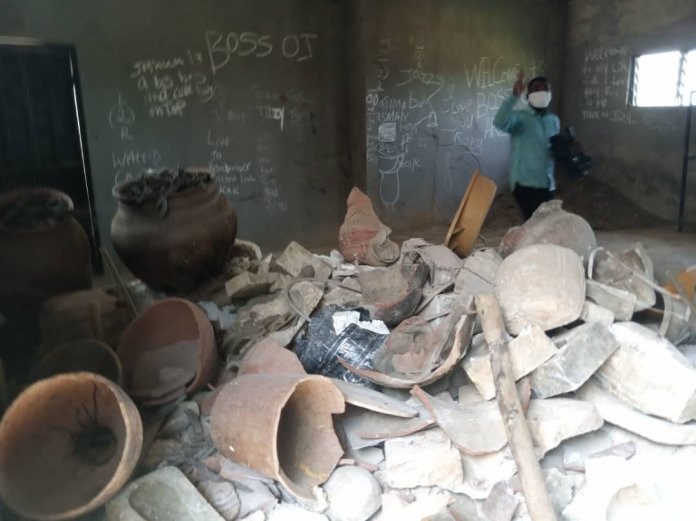 The scale of destruction of human lives and property following protests over police brutality in the FCT proved shocking and disturbing as the ministerial committee began its assessment of the real toll of the demonstration, Olawale Ajimotokan reports

The Federal Capital Territory (FCT) has set up a ministerial committee to assess the losses incurred by businesses and individuals during last month’s EndSARS protests that virtually put the territory on a lockdown.

The 18-man ministerial committee, headed by the DG FCT Emergency Management Agency (FEMA), Abbas Idriss, is also to assess how many persons died during the protest and identify and recommend the appropriate compensations for the victims.

The FCT Minister, Muhammed Musa Bello charged the committee to identify the families of those killed during the violence and assess and assign value to the damages inflicted on both public and private properties.

The setting up of the committee is consequent upon the resolve of the FCT Administration to compensate traders and local people whose property and means of livelihood were affected as a result of the violence that escalated during the protest against police brutality in Abuja.

It would be recalled that the fallout of the street protests in the FCT was the brazen looting of warehouses by hoodlums, targeting relief items that belonged to both government agencies and private companies.

The scale of the pillage leaves more to be desired. Some of the burgled items included food stuff like bags of rice, packets of noodles, mattresses, electronics, motorcycles, tricycles, textile materials, generating sets, computers and COVID-19 medical equipment among others.

Three persons were said to have been fatally shot on October 21, while many sustained various degrees of injuries, when Customs officers opened fired on hoodlums that had invaded the Nigeria Customs Quarters in Gwagwalada, Abuja, supposedly to plunder food palliative believed to be stored in the premises.

The scale of destruction was also pronounced in some of the worst affected places in Kwali and Gwagwalada Area Councils, where the hoodlums laid bared the Ladi Kwali Pottery Centre and looted warehouses belonging to FCT Teachers Multipurpose Cooperative Society plus the FCT Fertiliser store among others.

They damaged the Gwagwalada Area Council Secretariat and vandalised a micro finance bank in the area. A veterinary clinic was also not spared of the villainy of the hoodlums.

The FCT Fadama House, Gwagwalada Radio Nigeria Station and FCT Central store in Gwagwalada among others were also damaged by the miscreants.

Idriss assured that the committee would do justice to all the affected persons and institutions, while appealing for calm from those directly or indirectly affected.

The Chairman Gwagwalada Area Council, Adamu Danze, commended the FCTA for constituting the committee to assess the damages caused by hoodlums, while the Chairman of Kwali Area Council, Mr Danladi Chiya, said the council had compiled a comprehensive report of all the affected places and had summited to the committee for onward presentation to the minister.

The FCT Directorate of Road Traffic Services (DRTS) otherwise known as the Vehicle Inspection Officers (VIOs), estimated that its vehicles, valued at N1billion were either stolen or vandalised by the hoodlums, who broke through its auto pond in the Gosa area of Abuja, during the EndSARS protests.

The losses were presented by the Director, FCT DRTS, Wadata Aliyu Bodinga to the FCT Ministerial Committee.

He disclosed that the hoodlums carted away 174 vehicles, including 3,432 motorcycles and 43 tricycles. He also added that the miscreants, who roamed the streets, unhindered for three days, vandalised offices in the premises and removed an electricity transformer and about 40 solar panels.

“Not even a bolt was left because everything was completely looted, including the roofs which were removed. The observation post was vandalised. Anything metal, whether alloy or non-alloy was removed.

“We have evaluated the items. Like the motorcycles, we placed a value or N26,000 on each and even at that value, you have money running into over N800 million and the value of the vehicles is about N76 million. So, in all, what has been looted here is over N1 billion,” Bodinga lamented.

Similarly, this lamentation was echoed by the Chairman of the Abuja, Nasarawa and Niger Branch of the Manufacturers Association of Nigeria (MAN), Mr Odun Emasealu. He said that investments valued at N1.5 billion were vandalised by hoodlums that barnstormed the Idu Industrial Layout.

He said about 12 factories were damaged by the miscreants, while four warehouses belonging to the association were looted.

The hoodlums carted away equipment, removed windows, doors other things including toilet seats and bathtubs.

“We have gone round and the industrial equipment looted are very expensive. They raided the buildings and vandalised equipment. They took away windows and doors. They have rendered these factories totally incapacitated and in fact, the owners need to reinvest to get some of them back up again. We just hope that these people will not be demoralised, that they will have the faith to come up again”, Emasealu lamented.

The Apo Traders Association claimed two of its members, Luka Bitrus Ganklin and Elisha Ayuba, were killed by hoodlums.

The traders, represented by Okhueleigbe Desmond and Obiorah Ugwu said cars and other assets valued at N932 million were set ablaze during the crisis.

An NGO, Shelter Initiative for Africa Women, said palliatives kept in its warehouse and electronic items meant for its building were also stolen. Mrs Mariam Sulaiman put the value of items lost at the estate at N129 million.

The women centre in Jiwa was also not spared by the band of looters. The Sarkin Jiwa, Dr Idris Musa said most of the hoodlums that committed the crime came from other parts of the north and Niger Republic.

The FCT Customary court, the health centre and police station were vandalised and set ablaze by hoodlums in Dutse Alhaji and Dutse Makaranta in Bwari Area Council

Also at Dutse Makaranta, a trader, Dike Elvis Chinedu, lost his son, who was attacked and killed by hoodlums.

Idriss described the scale of the destruction caused by hoodlums during the protest as unprecedented, shocking and beyond what was earlier imagined.

“A lot of devastation took place in the FCT, it is unprecedented. We thought no life was lost, but we are shocked to discover that some lives were lost in Apo and Dutse.

“Setting an Islamic school ablaze was to complicate the crisis by giving it a religious colouration, but we thank God, it was contained. We pray this never happens again.”

Idriss assured that the committee would compile a comprehensive report and forward to the FCT Minister for consideration.