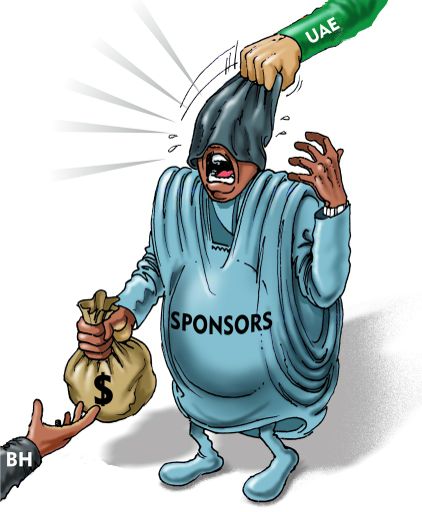 For the past 11 years, a variety of ideas and thoughts have been presented on how Boko Haram raises funds. Many local and international security experts wager that the insurgents make their money with which they carry out their nefarious activities through membership fees, extortion, bank robberies, kidnappings for ransom, drug trafficking, etc. But the recent arrest and conviction of six Nigerians by the federal appeal court in the United Arab Emirates (UAE) has opened a new vista in understanding how the terror network operates.

In sentencing two Nigerians to life imprisonment and four others to ten-year each, the Abu Dhabi court has revealed that funding the group may well rest with local sympathisers, including public officials. Court records indicate that between 2015 and 2016, the convicts transferred the sum of $782,000 from Dubai to Nigeria in aid of Boko Haram with their enablers exposed. And with the report from the UAE, we can now understand why Boko Haram continues to launch deadly attacks, not only in several communities in Nigeria but also in some countries sharing the Lake Chad Basin.

What reports from the UAE indicate clearly is that the insurgency has lasted this long due to financial and logistical supports offered by Nigerian sponsors. This is why the federal government should deploy diplomatic channels to seek details of the case. The Attorney General and Justice Minister, Abubakar Malami, said the federal government has reached out to the UAE but that the country was yet to respond. “Nigerian government has written firstly for copies of the proceedings, which will give the opportunity to see whether justice was done or not. And on whether they have committed the crime, we requested to know who and who are involved so that the Nigerian government will know what to do next,” Malami reportedly said.

Such a feeble approach to a serious problem that has become the hallmark of the administration will not do in this instance. This is a critical national security challenge that should be taken up at the presidential level. Never has there been such a veritable clue to unearth the sponsors of the terror group. There are two key findings in the report from the UAE that are now in the public domain. One, Boko Haram enjoys the support of some key government agencies in Nigeria and two, the insurgents launder money with the aid of some Bureau de Change operators. These are good leads on the Boko Haram insurgency which started in 2009, and has claimed some 30,000 lives, displaced more than two million people and has cost the nation hundreds of billions of Naira.

Even as we await the long-expected delivery of Super Tucano turbo-prop warplanes from the United States to boost the fight against the insurgents, the federal government needs to reappraise its strategies. The hype on the expected aircraft as a one cure all solution raises serious operational questions. At an elementary level, it seems unwise to broadcast such details. Besides, it is not clear what the manual on fighting terrorists stipulates about the use of communication. Both the army and the air force continue to gleefully announce the arms and ammunitions they expect. Perhaps this is meant to secure the confidence of the public while spreading fear and eroding morale in enemy ranks. But it is unhelpful because Boko Haram and its allies win the high ground by following each of these claims with one spectacular hit or another. This earns for them an image of invincibility.

Meanwhile, the real value of the UAE convictions is that it offers the federal government a window to uncover the enablers of Boko Haram both here at home and in the diaspora. The Central Bank of Nigeria (CBN) and the intelligence services now have a useful lead through the money trail of the convicts. Many have since suspected that the insurgency is being sustained by some communal endorsement of its creed. Sadly, that is what the recent judgement from the UAE has just confirmed.