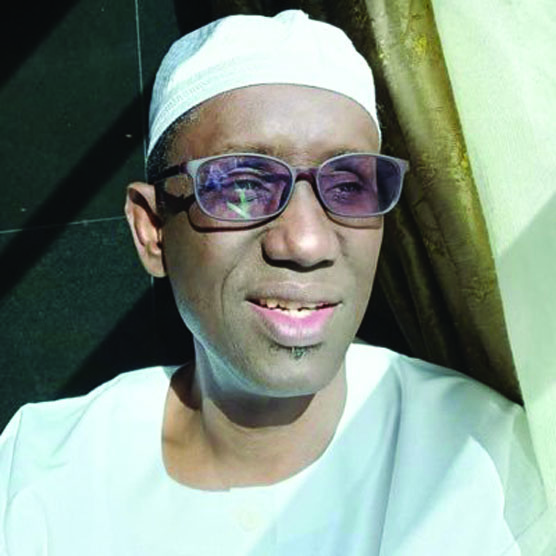 When the quintet of us met early in September to moot the idea of commemorating his 60th birthday there was thick apprehension. How would the man receive this? This question went round. Do we inform him, carry him along, or—as usual with things like this involving him, just pull a surprise? We know the subject all too well and could, with exactitude, predict his reaction. It was agreed, at the end of that meeting, that two of us mention it to him separately, to gauge his reaction. I went first and tried to understate what it was on the cards, so as not to alarm him. “It was something small we’re thinking of doing,” I said. Before I took in a breath, he replied curtly: “What for? No! There is no need”. The plan was to go on no matter his initial reaction. I know the man will be thanking his stars now that our plan has failed.

Mallam Nuhu Ribadu, who turns 60 today, November 21, is the most modest public figure I have known. He lives a simple life and completely loathes ostentation; from the grandiose—like throwing a birthday party—to the mundane, like riding exotic cars or wearing glamorous clothing. He is warm around people and wears his heart on his sleeve—passionate and blunt even if sometimes impulsive and politically incorrect. His stoicism and forbearance are atypical of typical politician. His patriotism is legendary, with complete blindness to ethnoreligious or any sectional schisms.

I think the first time I saw him was one evening in April, 2010, at Mambayya House, in Kano. He was a guest at that year’s annual Aminu Kano Memorial Lecture. I was there to report the event for my then employer, the LEADERSHIP Newspapers. When we eventually met one-on-one at the beginning of 2013, we struck an instant chord. I got the opportunity of having one of those his few and far-between media interviews. I went along with my senior colleague, Amos Dunia, who was well prepared for the encounter. We got a very good interview, which spread, unusually, into four pages.

By the second or third time we met, some three months after the interview, Mallam Ribadu made a rather surprising request. He wanted me to get him ‘a smart young person’ who could help him on a project he was working on; someone who is good with research and can help speech writing, among others. He was still trying to settle down to a normal life after the series storms and bubbles—his ouster from office as the pioneer chairman of the Economic and Financial Crimes Commission (EFCC), and subsequent two-year exile-cum-work in the UK and US; his failed presidential bid; his United Nations assignment in Afghanistan, and the phenomenal petroleum revenue inquest.

My almost off the cuff recommendation was my friend, Gimba Kakanda. He was then a rising writing star with idealistic socialist ideas. I talked Kakanda into pausing his impending study trip to India, for this. When I took him to see Mallam one day in early May 2013, something happened which appeared like orchestrated conspiracy: the two of them convinced me to leave my job as Assistant Editor at Blueprint to join Gimba in what would become my most exciting working sojourn.
Working with Mallam Nuhu Ribadu for three years (2013 to 2016) and associating with him ever since has shaped my life in more ways than I can count. Over the years, he grew from being an admired icon and boss, to a model that is revered, into a school that you learn from daily and a father-figure with exceptional demonstration of care.

Ultimately he shaped my worldview into a less and less materialistic one; strengthened my sense of justice and equity; emboldened me into a more courageous person, and, on a lighter note, changed my sense of dressing and somehow unsuspectingly enrolled me into the ‘Monogamous Men Club’, of which he’s a strong adherent.
I have travelled with Mallam all over the world; from America to Zambia, and from Aba to Zaria. As the saying that travel exposes a person’s real character, from my trips with him I have learned a lot. Two things stand out: One is his discipline. Unlike many a person of his standing, he possesses an amazing sense of self-control. Once in a room, he would just ask for two things: wi-fi and coffee, and that would be it, till the next day. He likes exploring the countryside and indigenous cultures, but never shopping or anything banal.

Second is his fearlessness. I have heard stories, including the famous encounter in which he slapped an armed robber while a student at the Ahmadu Bello University, Zaria, in the early 1980s. I first witnessed this part of him in November 2013. His bosom friend, former Katsina governor, Ibrahim Shema had lost his dad. We left Abuja around 8pm, with him saying we would spend the night in Kaduna and proceed to Katsina the next morning. Moments after we hit the road he lifted his head from his iPad; “Are we not following that road?” he asked when he noticed that the driver had passed the detour that would lead us to the ‘faster’ Bwari-Jere road. The driver explained that he didn’t follow the road because it was dangerous—kidnapping was then picking up on that route. He hissed. “Why should we abandon a road because of anybody?” Silence. By the time we arrived at the outskirts of Kaduna he asked for the time. It was 10pm. “It will just be a waste of time to sleep here and again travel in the morning. We can just complete the journey.” We arrived in Katsina at 1am.

The fearlessness is not only in relation to dangerous humans. He seems not to bother about dangerous animals, too. At the end of a meeting we attended in some resort hotel close to the Victoria Falls, in Zambia, we took a stroll to see the famed site. We walked past the busy areas, passed the inquisitive tourists. We passed all the adventurous white folks. It was now only the two of us in the thick of the groove, and by this time, my heart was in my mouth. When I cautioned him that “there are no more humans here”, he shot back: “Are we not humans?”

Mallam Ribadu is the most self-effacing person I have known. In words and in action, he tries hard to evade the centre-stage, except, of course, where it is absolutely necessary. Many a ‘big man’ announce entry at events by sauntering through the front door oblivious of disrupting proceedings, but this is one spotlight he avoids. Mallam would always enter through the back door and find an inconspicuous chair to hide. He would also rebuff attempts to take him to the front except when he encounters an adamant host, or has a pre-defined role to play at the occasion.

He is a lawyer, with a graduate degree in the field; a retired Assistant Inspector General of Police (AIG); a graduate of the National Institute for Policy and Strategic Studies; the founding Executive Chairman of the EFCC and holder of an honorary doctorate degree from Babcock University, Ogun State. Yet, as a mark of his greatness, he always addresses himself, formally or otherwise, as simply “Nuhu Ribadu”. Many friends and associates refer to him fondly by his initials, NR.
Mallam Ribadu is someone who can stand for friends through thick and thin. He is also so well meaning that it takes him a long time to lose trust in anybody. I was there one day when a top banker, in the course of conversation, narrated how they had allegedly bribed one of his then top lieutenants at the EFCC to secure the release of a bank executive. Mallam was jolted. He sturdily defended the ex-colleague, vowing that the man’s allegation was impossible. When he was told, in the heat of the campaign for the Adamawa Government House in 2015, that the same man was working hard to undermine him by actively supporting his opponent, he again hotly rebuffed the suggestion, despite the credibility of the information.

A friend asked me, after the wedding Fatiha of his daughter in October, and recalling the mammoth crowd when his two sons got married in January, “What is the secret?” For me his major secret for attracting this respect across the board, despite leaving office 12 years ago, is his decision to ‘find his level’, as the Nigerian lingo goes. He hardly goes to anybody knocking at doors. This legendary sense of contentment earns him respect and admiration. His watchword, he once told me, was his father’s admonition: “If you are on a journey for fortune and you meet honour on the way, stay there.”

Yes, this man is no saint. One major criticism against him, lately, was his sojourn to the People’s Democratic Party (PDP) and back to All Progressives Congress (APC). In my years with him, this was the most discomforting period I have noticed for him. Joining the PDP was a bitter decision personally and was largely at the instance of close friends who genuinely meant well. “This is not me!” he kept telling some of us close enough. Expectedly that decision brought dent to his otherwise distinguished image. But contrary to perceptions in some quarters, the cross-carpeting was no miscalculation, politically. It was a good political decision which however went awry with rapid changes in the polity.

His self-effacing conduct often offends people. He chooses, for example, to maintain dignified distance from friends in high places or get involved into just anything happening to remain relevant, as is the practice among the political elite. This is not funny for many. He is almost always difficult to get on the phone—he distastes the device. Usually anyone who calls to ask me for his number gets this response: ‘Go to his house in the afternoon. He’s there’.
One can go on and on about this patriot and selfless gentleman.
As you celebrate your diamond jubilee, we pray that Nigeria, the birth year mate you intensely love, is blessed with many more of such disciplined, dedicated, passionate and patriotic citizens like you. Happy birthday, Sir.
––Abdulaziz works as a journalist in Abuja. Twitter: @AbdulFagge.