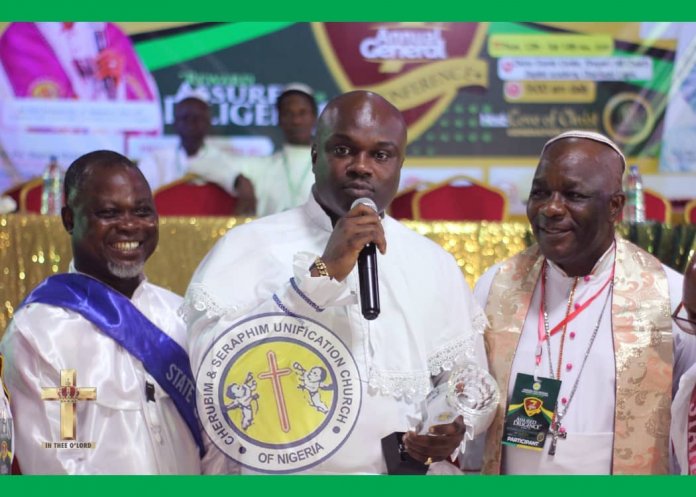 Members of the Lagos State chapter of the Cherubim and Seraphim Unification Church of Nigeria recently marked their seventh Annual General Conference where matters of importance to their members in the state were brought to the fore, while some members deserving of recognition for their support to the chapter were duly honoured during the three-day event, writes Mary Ovie

For three days, last week, exactly between Thursday, November 12 to November 14, 2020, selected members of the Lagos State chapter of the Cherubim and Seraphim Unification Church of Nigeria, trooped out to celebrate the seventh Annual General Conference of the chapter in pomp.

The capacious venue, Divine Events Centre at Obanikoro area of the Lagos metropolis, witnessed a flurry of activities from organisers and participants of the conference, which was hosted by the Love of Christ Generation Church C&S, founded by renowned philanthropist and global evangelist, Rev. Motrher Esther Abimbola Ajayi.

The leadership of the Lagos State chapter of the church as well as the participants at the conference could not hide their joy and ecstasy for being able to stage the annual conference in spite of the threats of the ravaging COVID-19 which had led to ban on such gathering in the country while the pandemic still ravaged.

Of course, the recent threat posed by the #EndSARS protests especially had threatened the event, but the God of Cherubs stood solidly behind the chapter to help nip these crises in the bud. Eventually, when it came, the seventh Annual Conference of the chapter, was full of fun and praises to God for keeping their members across the state alive in the midst of the recent challenges that confronted the state.

As had been the case in the last six editions, the conference was usually to review activities of Cherubim & Seraphim churches under the chapter (via its individual member churches as well as local divisions) comprising of the chapter and also use it as a launch pad for its activities in the New Year.

While welcoming participants to the three-day event, Chairman of the Conference Planning Committee, Apostle Femi Caleb Akinpelu JP, was full of gratitude to God for not making all their efforts to come to naught on account of the challenges that had befallen the state in the recent past.

According to him, “when two years ago, we were saddled with the responsibility of organising a conference befitting the status, it was clear to us that posterity has bestowed on us the opportunity to contribute our quota towards the advancement of the noble ideals of the chapter.

“The above conviction became more apt when that year, it was announced that the host for the 2020 edition of the conference would be the Love of Christ Generation Church C&S headed by renowned philanthropist and unmatched prophetess of God, Rev. Mother Dr. Esther Abimbola Ajayi. Here we are today.”

Apostle Akinpelu, on behalf of the committee assured participants and guests that the event would be a memorable one, which it truly was.

In his speech to participants during the opening ceremony, Chairman of the Lagos State chapter of the C&S Unification Church of Nigeria, Snr. Supt. Apostle Dr. Joseph Olatunde Adagba JP took time off to re-echo the rationale behind the chapter’s annual conference, which his leadership brought to bear since assumption of office.

According to him, “the history and reason for this annual gathering, which started in 2014, came about when we put our heads together to create an avenue for all our churches in this state to come and deliberate and chart out a way of knitting us together more.”

Apostle Adagba also used the occasion to present the scorecard of the administration he superintend over saying, “I want all lovers of this state chapter to, once again, thank the Lord God of our father St. Moses Orimolade Tunolase and our mother, Capt. Christiana Abiodun Emmanuel, who used that woman of grace, I mean Iya Adura, Rev. Mother Dr. Esther Abimbola Ajayi, that great philanthropist to acquire for us that parcel of land at Akinhanmi Street” for the ultimate erection of our Secretariat there.”

On the COVID-19 pandemic and especially the #EndSARS protests that recently shook the state to its foundations, Apostle Adagba continued, “I want to commiserate with the families of those that lost their lives in the protests and also those who lost properties during the crisis. Therefore let us continue to pray for our country and Lagos State even more than we did in the past. We must not allow the devil and his team to have their heinous ways . I pray to God to heal our land.”

At the opening ceremony, some key officials of the church nationally were present among who were Supt. Apostle Emmanuel Omoniyi Owomoyela, Chairman of the National Executive Council and Secretary General of the Church in Nigeria, Special Apostle Tunde Ogunkunle JP. Also, Special Apostle Akin Owolabi and Apostle Tayo Ajose, an Assistant Secretary of the Church in the country were also present among some heads of church that witnessed the opening ceremony.

While declaring the conference open on behalf of the Supreme Head of the Church, Apostle Owomoyela, commended the Joseph Adagba-led leadership of the chapter for partnering the church at large, to propagate the Good News as well as help in reaching the grassroots of the church where the majority of members are domiciled.

It was not only about festivities on the opening day as time was created for investment talk from a financial expert, Mr. Seyi Odufuwa, ECO of Skyview Capital, who was joined by some of his officials to take participants through the need to be business-conscious, especially at this time of financial lull and economic strain on the country.

Of course, the business talk was preceded by the Conference Theme lecture, delivered by Prophet Oyaniyi Olawale Timothy, leader in charge of the Love of Christ Generation Church, Igbaye, in Osun State, who did justice to the theme of the conference ‘Reward Assured for Diligence’ (2 Chronicles 15:7).

Also, time was made out for health talk for participants since they say, ‘health is wealth’. The health talk was provided by renowned educationist, Dr. Chris Willaims, to the admiration of participants.

Time was given to participants to ask questions on some of issues raised in the general secretary’s report to which explanations were given.

As had been the practice, day three of the event is usually for thanksgiving service and this year was no difference. So, the service started at exactly 10:00a.m with the Mass Choir of the chapter rendering hymn ‘Ewole F’Oba Ologo Julo’, which heralded in leaders of constituent churches in the chapter and officials of the Lagos State chapter.

The sermon at the Thanksgiving Service was delivered by Special Apostle Olowogorioye, who delved deep into the need for continuous unity in the Body of Christ.

Thereafter, the Lagos State chapter’s chairman, Special Apostle Segun Adio JP, took to the podium to avail participants with the Resolutions reached during the three-day summit and which are meant for implementation by all federating churches in the chapter.

The Lagos State chapter also deemed it fit to dole out awards to deserving groups and bodies who had been of immense support to the chapter and its Wings. The awardees were The Love of Christ Generation Church C&S, Supt. Gen. Apostle (Hon.) Dave Salako, Snr. Apostle Tunde Fadeyi, Snr. Apostle Seyi Odufuwa, CEO of Skyview Capital and Snr. Apostle Femi Awoyemi.

Of course, the last day event was interspersed with rib-cracking jokes from popular comedian, Kenny Black.

The event was witnessed by several heads of C&S Church in Lagos State and some eminent members of the church. Although some pressing matters of state would not make her physically participate in the event, however, Rev. Mother Esther Ajayi sent in her best wishes.