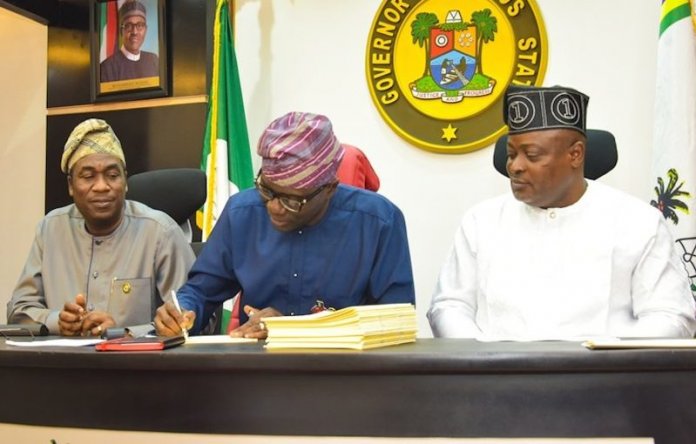 Despite the dwindling revenues of states and their inability to effectively meet workers’ demands and other obligations, many state governments are unwilling to repeal the laws that legalised the payment of pension and other benefits to former governors and their deputies, THISDAY investigation has shown.

Inquiries by THISDAY against the background of the move by the Lagos State Government to abrogate the law, showed that some of the states, including Akwa Ibom, Adamawa, Sokoto and Enugu have no immediate plans to review the law and free funds for other critical purposes.

He had told the House of Assembly while presenting his 2021 Appropriation Bill that he would soon send an executive bill to repeal the Public Office Holder (Payment of Pension Law 2007) that empowers the state government to pay pension and provide other welfare benefits, including houses in Lagos and Abuja, vehicles and other accouterments of comfort to the former governors and their deputies.

A few days after Sanwo-Olu committed himself to repeal the law, which formed the template adopted by other states to confer benefits on the former governors and their deputies outside the scope recommended by the Revenue Mobilisation, Allocation and Fiscal Commission, Kwara State Governor, Mr. AbdulRahman AbdulRazaq, pledged to do the same.
AbdulRazaq, at the weekend, said he would send a bill to the state House of Assembly next week, requesting the lawmakers to immediately repeal the law.

However, an investigation by THISDAY revealed that many states are not willing to scrap the unpopular legislation.
Adamawa State Governor, Hon. Umaru Fintiri’s, media aide, Mr. Solomon Kumangar, told THISDAY at the weekend that the state government has no plan to scrap the law, which was passed in 2008.

“Adamawa State has such a law passed in 2008. For now, there is no plan to scrap it because there has to be a whole process of legislation before it can be abrogated,” he explained.
In Plateau State, the state government also said it was not thinking about scrapping the law, which came into effect during the administration of Governor Jonah Jang.

The state Commissioner of Information, Mr. Dan Manjang, told THISDAY that the decision to repeal the law does not lie with Governor Simon Lalong but with the people of the state through their representatives in the state House of Assembly.

He said: “Yes, I am aware that such a law exists, but I cannot give you the details of the content now because I don’t have a copy of it with me. It came into effect during the administration of Governor Jang. I am also aware that the law has not been repealed.

“But I can also tell you that it does not lie within the decision of the government to determine whether or not it should continue; the people of the state would have to decide that through their representatives at the state House of Assembly.

“If the people say that they want it to continue as it has been, then the government cannot do otherwise. But if they want it changed, they should do so through their representatives at the state Assembly.”
The Anambra State government said the review of the pension law for former governors and their deputies would not be the sole decision of Governor Willie Obiano.

The state Commissioner for Information and Public Enlightenment, Mr. C-Don Adinuba, told THISDAY that the matter is a sensitive issue and he would not speak further on it.
He, however, added that since there is a law backing the payment of pensions to former governors, it will be unfair for the governor to singlehandedly repeal it without going through the normal process and making consultations.

He stated: “Anambra as you know is a very democratic state. There is a law backing that payment and if the governor will scrap it, then he will discuss it with executive council members. That matter is sensitive and I have not discussed it with him; so, I cannot give you a categorical answer whether he would scrap it or not.

“For people like Obiano and the former governor, Mr. Peter Obi, I am sure they will not feel it if the payment is scrapped because they were wealthy before they became governors, but there are some among the ex-governors who are not.”
In Sokoto State, the Special Adviser to the governor on Media, Mr. Muhammad Bello, told THISDAY that he was not aware of any plan by the state government to repeal the law.

The Enugu State government has also said that there are yet no plans to scrap the pension law.
The state Commissioner for Information, Mr. Chidi Aroh, said all the states in the country are independent and decide whatever happens in their states.

He stated that Enugu State has not decided whether it wants to scrap the law or not, adding that the state will make it known to the public when it has a position.

“States are not a secondary school together. If Lagos State says they are scrapping their pensions for governors that is their position. If Kwara has said that, it is their own position,” he said.
The Abia State Commissioner for Information, Mr. John Kalu, was also not categorical in his response on whether the state is going to scrap the pension law.

He, however, did not rule out the possibility of doing so as part of measures to free funds for developing the state.
“We are looking at all available options to improve our financial capacity to deliver more dividends of democracy to the people.

“In due course, we will make public our position,” he told THISDAY.
A source at the Government House, Kano State told THISDAY under anonymity that the administration of Governor Abdullahi Umar Ganduje has no option than to continue the policy, because the governor had also served as deputy governor.

“There is no plan to scrap the law for payment of gratuity to former governors and the deputies. It was originated by the former administration of Shekarau and it is difficult to scrap it now,” the source said.

However, the state Commissioner of Information, Malam Muhammad Garba, and the Chief Press Secretary to the Governor, Mr. Abba Anwar, declined to comment when contacted by THISDAY.

When asked if the Akwa Ibom State government has the plan to scrap the pension scheme for ex-governors and deputy governors, the state Commissioner for Information and Strategy, Mr. Ini Ememobong, said he was not aware of any move to do so.

“His Excellency, Governor Udom Emmanuel, has not communicated his position yet on that matter,” he told THISDAY.
Ememobong, however, added that the payment of pension to former governors and deputies was supported by law.
“It is a matter of law. There is legislation to it. That action is backed by law,” he said.