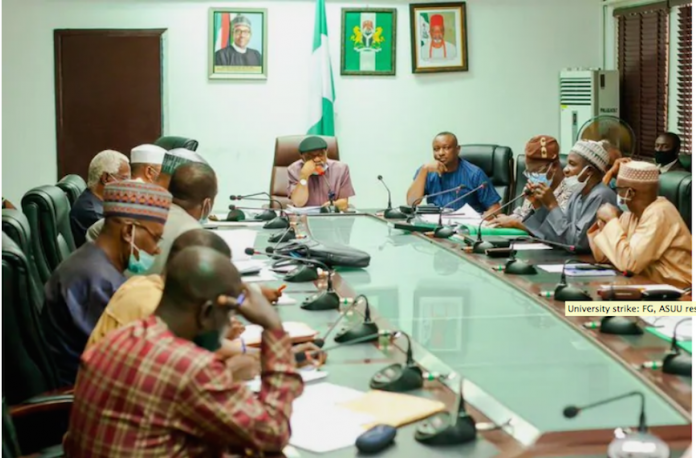 The feud between the federal government and the Academic Staff Union of Universities (ASUU) has worsened as no date has been fixed for resumption of negotiations by the two parties.

With this development, there is no end in sight for the resolution of issues that led to the protracted nine-month- old strike by ASUU. The union went on strike to pressure the federal government to address its concerns about remuneration, working conditions, earned allowances and obsolete infrastructure, amongst others.

Also, amidst agitations by unions in federal universities for a sector-specific salary payment platform, the Minister of Labour and Employment, Senator Chris Ngige, has kicked against multiple technology-driven payment platforms. He said any such device must align with the existing Integrated Payroll and Personnel Information System (IPPIS).

The Permanent Secretary to the Federal Ministry of Education, Mr. Sonny Echonu, told THISDAY in Abuja at the weekend that the lingering strike is uncalled for and unnecessary, as all the contending issues have been resolved except one.
But ASUU National President, Prof. Biodun Ogunyemi, in an interview yesterday, faulted the permanent secretary’s claims.

He also warned that the federal government’s poor handling of the industrial crisis could lead to another wave of brain drain, adding that already, Ethiopia has recruited over 200 Nigerian professors.
Echonu said reason is expected to prevail as the overall national interest will be the guiding principle in resolving the industrial dispute.

“The government is working very closely. We are very concerned and the president is very concerned about this protracted strike, which to so many of us is unnecessary. We believe there are other ways of getting things done.
“There’s a shared acceptance of so many of the issues and we are at a point that very quickly and soon, it will be resolved. There’s only one issue in contention, really. The other issues have either been resolved or there have been some kind of compromise that worked out.

“We believe that reason will prevail and the overall national interest will be the guiding principle in coming to a quick resolution. I can assure you that work is going assiduously in this.

“Only two days ago, the ASUU executives were at the ministry to meet with the minister for certain consultations and we felt we needed to tell them exactly what our positions are.
“We will look at the overall interest of the Nigerian people. We know that we also operate in a context of government playing out different segments even in the university setting.

“We have four different unions making demands and we have to balance this. We understand the peculiarities of ASUU and we believe the members are patriotic enough to know when to call it quits and what to call a compromise,” he added.
Reacting, Ogunyemi told THISDAY that pending issues such as withheld salaries of members by the Account General of the Federation and announcement of negotiating teams, among others, have not been resolved.

He said government is eager to sign Memorandum of Understanding (MoU) “with low-priced countries of yellow skin while the nations universities are treated with disdain.”
He added that a second aspect of brain drain on the nation will have a crippling effect on the academia and the entire nation.

“So, what our members are saying is that if each time we go on an action like this, government will make promises and sign memorandum of action and they will keep it for the next two weeks, two or even three months and will promise we will get revitalisation. They will say EAA will be paid because we have agreed on the framework of payment. After that, they will go to sleep. Our members are saying that this time around, they don’t want promises. They want action. So, there is a difference between saying we have addressed all the issues and we have delivered on all of the issues.

“The key word here is to ask them what they have delivered concretely and when they delivered it. So, at this point, can we tell our members to go back to classes when their salaries have been withheld? Can we tell them to go back to classes when the Accountant General took most of their salaries and have refused to remit? When government has taken steps to cripple our union? When government is taking steps to stall our progress? So it is not enough to say they have addressed the issues. Each time government says “we have addressed”, it means we have talked about this.

“Our members want government to deliver on its promises so that no one will blame us again next year and say we are back again in strike after how many months. There has to be stability in the system so that private universities will not bask over our students because they are happy we have crisis. If not because of public universities, I can assure you that most of the private universities will be shut. But we are expecting solution between public universities and the government. So it is not about we have talked or we are talking. It’s about we have delivered.

“Our members want to see that government has not just delivered but has satisfactorily delivered. Yes, we are talking on various levels and until we see the results of those discussions, our members cannot go back to the classrooms,” he said.

On the issue of patriotism and national interest, which the federal government said will be the guiding principle in resolving the strike, Ogunyemi said: “Everything ASUU is doing is informed by patriotism. Every time government officials say they are working in the interest of the nation, we always remind them where they have placed education in the interest of the nation. If they prioritise education, they will have no reason to attack ASUU.

Education is the driver of progress in everything in life. This country is aspiring to develop. They are talking of local content. They said we should look inward. How can you say we should look inward when you are treating your scholars as if they are irritants, as if they are nonentities and hoodlums? We want to remind them that each time they talk about interest of the nation, that they don’t love this country more than Nigerian scholars.

“If not for patriotism, our members would have abandoned universities and flee to better countries where they will be better treated. Do you know the number of African countries looking for Nigerian professors? A few months ago, Ethiopia came to recruit 200 professors from Nigeria. I don’t want to talk of South Africa. Go to Ghana, Egypt, you will see them there. We treat our scholars with discontent. Each time they step out, they are highly valued and highly priced. The government is eager to sign MoU with low priced countries of yellow skin, but their universities where they should draw the partnership they are looking for, they have treated with disdain. No country in the world does that.

“Universities are incubating centres for innovation, creativity, and development. So, if anybody thinks that ASUU does not love this country, that person should be interrogated to define the concept of patriotism. ASUU members are great patriots and deserve all the respect the nation can accept them.

“I totally disagree with the permanent secretary. Everything ASUU is doing is in the interest of the nation. If we allow our universities to collapse, I can assure you that the children of the poor will suffer and the nation will pay dearly for it. We are yet to recover from the brain drain experienced. I don’t think they should allow us to suffer the second aspect of brain drain. But we can understand if the ruling class does not care if universities should collapse.”

Meanwhile, ASUU also yesterday denounced the Twitter account, registered in its name, which asked students of public universities to prepare for resumption as a positive outcome is expected from the union on Wednesday.
Ogunyemi described the information as fake news, saying that the union does not operate any Twitter account.

Ngige opposed multiple payment platforms for the various unions in the universities, saying that having such multiple technology-driven payment platforms is being discouraged globally.
A statement yesterday by the minister’s Special Assistant on Media, Mr. Nwachukwu Obidiwe, said Ngige spoke in Abuja when the immediate past President of the Senior Staff Association of Nigerian Universities (SSANU), Mr. Samson Ugwoke and his successor, Mr. Mohammed Ibrahim, visited him.

Ngige told the SSANU delegation that the federal government will look into the payment system as demanded by SSANU and the Non-academic Staff Union of Universities (NASU).
He, however, added that any of such systems must have a “handshake with IPPIS and other payment system in use by the federal government as having such technology work in silos is being discouraged even globally.”

On his part, Ugwoke commended Ngige for the seasoned and dispassionate approach he has been handling trade disputes.

He said: “We are here to present the new president of SSANU and ask that you extend the patriotism, friendship and understanding which I enjoyed to my successor. Your understanding of various challenges facing Nigerian workers operating under different unions, the patience and transparency with which you mediate, reawaken hope in us that government is committed to the welfare of workers.”

On the controversial IPPS payment platform, he informed the minister of SSANU’s alternative, the University General Peculiar Payroll Payment System( UGPPPS), which it developed in conjunction with the Non-Academic Staff Union of Universities (NASU).
He, however, said the union would reconsider its position if IPPIS would be updated to accommodate the peculiarities captured by UGPPPS.