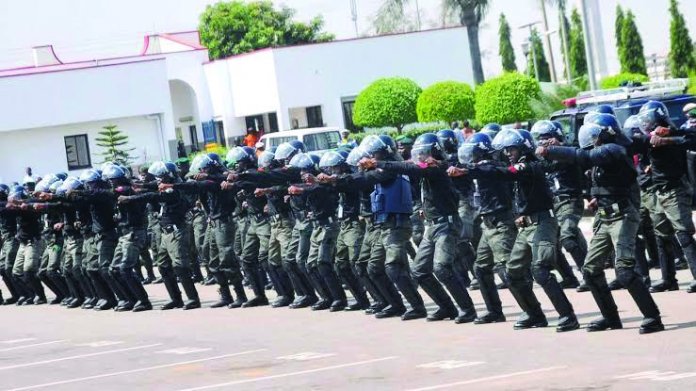 Notwithstanding their excesses, the police are an indispensable part of the society, writes Olawale Olaleye

PROLOGUE
Even in dictatorship, the place of the police is not subject to a debate neither can it be traded for anything, however big the offer is. As the first line of defence in any given social unit, the general roles, functions, powers and duties of the police remain immutable.
Much as they remain obligatory in any society, their brutalities are not peculiar to race, colour or region. What differs from country to country, however, is the propensity for their excesses as condonable by the respective societies. But the police, anywhere in the world, are naturally inclined to brutalities, when no one is watching.

Therefore, the disposition of the Nigerian police is not an exception or without parallels. More often than not, if not a reflection of the society, their choices are evidently the byproducts of the society and her leadership preference.
Sloganeering that the “police is your friend” has always meant a different thing to the average Nigerian, who shares the belief that if anything constitutes threat to his or her existence, then, it is the police constitutionally obligated to protect him or her from dangers and keep them safe.

That the police in Nigeria have turned out a monster with a notoriety that astounds even those who live in Banana Republic didn’t just start today. More worrisome is that the people have never considered the police their friend and this mindset had taken root ages ago. Yet, no one paid attention to the dangers such portended.

Unfortunately, interrogating how the police became a direct opposite of what they were designed to be has never yielded a desired result. But once it instantly inflamed passion, triggered reaction both for and against, the cycle regains momentum.

Nonetheless, the police are much more important for the sanity of any society than they are recognised or credited for. With a multiplicity of functions roles and duties far below the reward and recognition they get, it was not surprising that the police in Nigerian have not been able to live above the society that produced them in the first place.

The Bureau of Police Research and Development (BPRD), India’s premier police modernising agency, did a noteworthy dissection of the police – their roles, functions and duties – in a manner that situated their importance on the one hand and on the other, suggested why the police in Nigeria might continue to under-perform.

In one of the research papers, BPRD described the Police as one of the most ubiquitous organisations of the society, and as such, the most visible representatives of the government.
“In an hour of need, danger, crisis and difficulty, when a citizen does not know, what to do and whom to approach, the police station and a policeman happen to be the most appropriate and approachable unit and person for him. The police are expected to be the most accessible, interactive and dynamic organisation of any society,” BPRD noted.

But their roles, functions and duties in the society, it claimed, are natural to be varied, and multifarious on the one hand; and complicated, knotty and complex on the other.

“Broadly speaking, the twin roles, which the police are expected to play in a society are maintenance of law and maintenance of order. However, the ramifications of these two duties are numerous, which result in making a large inventory of duties, functions, powers, roles and responsibilities of the police organisation,” it added.

From upholding and enforcing the law impartially, and protecting life, liberty, property, human rights, and dignity of the members of the public; the police promote and preserve public order; protect internal security, prevent and control terrorist activities, breaches of communal harmony, militant activities and other situations affecting internal security.

Also, apart from protecting public properties, which include roads, railways, bridges, vital installations and other establishments against acts of vandalism, violence or any kind of attack; they equally prevent crimes, and reduce the opportunities for the commission of crimes.
These, they get done through their own preventive action and measures as well as by aiding and cooperating with other relevant agencies in implementing due measures for prevention of crimes. But these are largely not feasible with an underfunded and poorly motivated police.
However, a quick run of these roles, functions and duties, encapsulates the place of the Nigerian police as exemplified through the events of the last few weeks.

Whilst the excesses of the police recently stoked a major protest that held the country hostage for nearly three weeks by youths, who sought an end to police brutality, the insecurity it left on its trail has also lent credence or reaffirmed the place of the police in the artery of the nation’s body polity.

Their brutality, in every sense of the word, is not defensible or excusable, but the roles they play in keeping the society safe is not debatable either. What the country needs, therefore, is a middle ground that firmly establishes the place of the police and ensures their men act with decency, self-esteem and within the dictates of their powers. Given a better-motivated police force with deserving remuneration, good reward system, solid insurance, befitting housing scheme and constant training and retraining, the story of the Nigerian police is certain to change for the better.

Above all and the most important in keeping a decent police force, is paying attention to the recruitment process. There’s no debating the fact that there’s often not enough background checks on new recruits, the reason a majority of those who elect to serve in that capacity are no better than the dregs of the society, whose capacity for crime and mischief is not stifled by the long arm of the law, not even with complicit police leadership.

But where serious checks are situated at this stage, with other actions activated to improve their wellbeing, the Nigerian police can actually be a model force, beyond the current allegations of brutalities that seem to overwhelm their otherwise commendable feats.