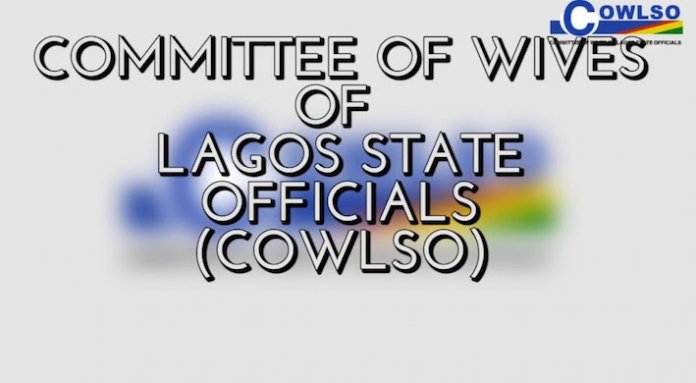 In the commitment of any government to end poverty and improve the standard of living of its citizens, the implementation of socio-economic programmes, especially in terms of women empowerment must be put in proper perspective.

In Lagos State, for instance, the Committee of Wives of Lagos State Officials (COWLSO) remains a major vehicle through which numerous women empowerment initiatives are being implemented. The sole objective of the Committee is to bring wives of the state government officials such as Governor, Deputy Governor, National and State Assembly Members, Commissioners, Special Advisers, Permanent Secretaries, etc., together under one umbrella to discuss issues of mutual interests.

The committee is a community-based gender organisation established principally to complement the efforts of the government in bringing about exponential development and growth among Lagosians. It promotes child healthcare as well as empower women to discover their hidden treasures and protect the environment, among others.

Founded in 1974, by the late Mrs. Funmilayo Johnson, wife of the first Military Administrator of Lagos State, COWLSO was revitalized in 2000 by Senator Oluremi Tinubu, the then First Lady of Lagos State, after years of inactivity.

During her tenure as COWLSO’s Chairperson, Senator Tinubu mobilized wives of the government officials to complement government’s efforts in the provision of essential infrastructure for Lagos residents.

Her tenure recorded massive achievements in the construction of recreation centres and gardens across the state to promote the culture of good family life through embracing a culture of relaxation in serene centres.

Also, Senator Tinubu’s passion for the aged and retirees influenced her vision of setting up a Retirement Villa in the state. The vision of constructing the villa was fully realized during her predecessor, Mrs. Abimbola Fashola’s tenure. Through this, the committee has taught political leaders an instructive lesson in continuity in governance.

The committee is concerned about the general well-being of mothers and children, in line with the Sustainable Development Goals (SDGs). A few of the projects that have been initiated and commissioned in that light include the upgraded Intensive Care Unit (ICU) of the Lagos Island Maternity Hospital, Lagos and the neo-natal hearing screening equipment.

Some COWLSO’s projects in the health sector include the renovation/furnishing of the Oncology Department of the Lagos State University Teaching Hospital (LASUTH), provision of financial assistance to cancer patients for treatment and surgical operations within and outside Nigeria and adoption of a ward at the Island Maternity, Lagos.

It also engaged in advocacy against rape and domestic violence, presented relief materials to the victims of the Abule-Egba pipeline explosion at the Igando Relief Camp and visited markets across the state to ensure strict adherence to the Covid-19 guidelines among others.

The National Women’s Conference (NWC), an initiative of Senator Tinubu, remains a major rallying point of the committee’s numerous engagements. The first edition of the NWC was held in 2001 with the theme: “The Virtuous Woman”. Ever since, the conference has grown in leaps and bounds.

In 2015, COWLSO chose “Relevance in Economic Turbulence” as the theme of that year’s NWC. In 2016, COWLSO held its 16th Conference, which ran from October 24th to October 26th, under the theme: “Strong Family, Strong Nation”. The 17th edition of the conference with the theme: ‘She Creates, She Transforms’, was a befitting celebration of the perseverance, deftness and resourcefulness of women and their outstanding contributions towards nation-building.

The 18th edition was held from 23rd to 25th October, 2018, at the Eko Hotel and Suites under the theme: “Strengthening our Collective Impact”, while the 19th edition themed: “Unlearn, Learn and Relearn: 21st Century Women’s T.H.E.M.E.S Perspectives/Approach”. The 2019 edition was specifically designed to empower women with skills to key into emerging opportunities being provided by the current administration of Mr. Babajide Olusola Sanwo-Olu.

Recently, the committee held the 20th edition of the NWC between October 14th and 15th, 2020, at the Eko Hotel and Suites, Victoria Island, Lagos. The two-day programme was themed: “Exploring the Possibilities in a New World”. Mrs. Sanwo-Olu, disclosed that COWLSO has always supported officials of the state government, while also stressing that it has improved the welfare of Lagosians.