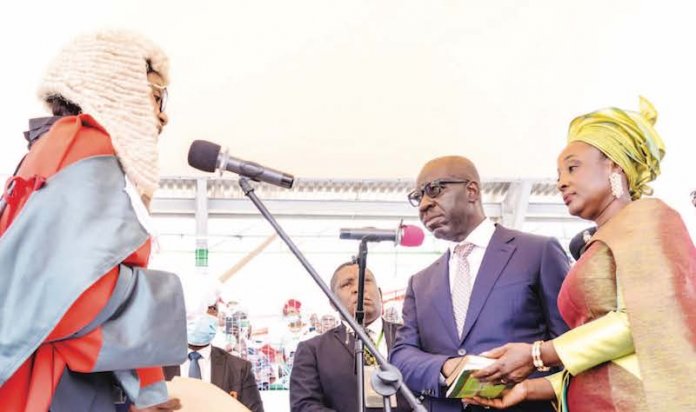 Edo State Governor, Mr. Godwin Obaseki, yesterday unfolded his priorities for his second term in office, which began with his inauguration along with his deputy, Philip Shaibu, in Benin City.
Obaseki, in his inaugural speech, promised to focus more on the development of the social sector, the state’s economy and infrastructure as a step towards improving the living conditions of the people.

However, the inauguration was nearly marred yesterday when the Aide-de Camp (ADC), to the governor collapsed on the podium.
Obaseki said his administration would be committed to working for every Edo State citizen by ensuring that the state grows into a globally competitive economy enabled by technology for the benefit of all.

He predicted that before 2025, Edo State will develop and grow its digital economy and operate a digital government, adding that “we are building to plug into the new digital age and will ensure we deliver better and efficient services to all our citizens.”
According to him, in realising this vision as reflected in the Make Edo Great Again (MEGA) manifesto, the focus will be on the social sector by improving on education, healthcare system, provision of social security and safety nets, caring for the vulnerable and the disadvantaged in the society.

He also promised to rapidly develop critical energy, housing, digital and road infrastructure, which will provide a framework to drive inclusive growth; build the economy and drive industrialisation, trade and investment, to solidify the state’s status as the choice investment destination in the country.

Obaseki said he would preserve the environment and public utilities and make the state more functional and adapt to the challenges of climate change and rural-urban migration
“Our major drive will be the clean and green Edo initiative and sustaining our campaign to plant trees and restore the forest.

“Enshrine peace amongst our people and improve the general security to lives and property within the state, by working closely with all religious, traditional and community stakeholders;
“Exploit agriculture and natural resources, by tapping our God-given resources to provide food security, create wealth and improve the livelihoods of our people;

“Strengthen public service, public finance and public revenue, by recalibrating our workforce for the future world of work;
“Sustain law, judiciary and legal reforms, to ensure justice, equity and fairness in private and public dealings;
“Promote arts and culture, to preserve the past, document the present, envision the future, and use our arts and culture as a springboard to develop tourism;

“Revamp the transport sector by developing transport infrastructure to a more modern and affordable system,” he added.
According to him, his administration has identified “initiatives to drive public service reforms over the next 12 months by accelerating capacity building; finding new ways of working and operationalising the civil service training centre as a centre of excellence in training public servants.”

“With a target of ensuring a defined template for development and growth in our state up till 2050, we have set the modalities for a 30-year development plan to provide government with necessary tools, guidelines and milestones for development planning,” he stated.
The governor thanked traditional and religious leaders for their sustained support and prayers, adding that such support has been the major pillar of his programmes and policies in the last four years.

He also thanked the Independent National Electoral Commission (INEC), the security agencies, and President Muhammadu Buhari for upholding the constitution and allowing the will of the people to prevail.

“This victory is the prize and vindication for family values that was bequeathed to me by the Ogbeide-Oyo Obaseki and Gbinigie families.
“That I stand before you today as the re-elected governor of Edo State is a testimony to the awesome power of God Almighty and the indomitable will and determination of the great people of Edo State.

“The good people of Edo State spoke unequivocally through the ballot on September 19th and have entrusted us with the task of steering our state for another four years.
“I am encouraged by the trust you have bestowed on us and grateful for your belief in my leadership and my capacity to continue piloting the affairs of this great state.

“The world is currently going through unprecedented challenges, which is taking its toll on our collective wellbeing and demanding so much from the socio-economic and political structures that hold us together,” he said
The oath of office, which was administered by the Edo State Chief Judge, Justice Esther Edigin, was witnessed by the Chairman, South-south Governors’ Forum and Governor of Delta State, Senator Ifeanyi Okowa; Sokoto State Governor, Hon. Aminu Waziri Tambuwal; Governor Douye Diri of Bayelsa State; Rivers State Governor, Mr. Nyesom Wike, represented by his deputy, Dr. Ipalibo Harry-Banigo; South-south Vice-Chairman, Peoples Democratic Party (PDP), Chief Dan Orbih; former Minister of Works, Mr. Mike Onolemene; and former Chief of Staff to former President Goodluck Jonathan, Chief Mike Oghiadomhe.

Others present at the Tennis Court of Samuel Ogbemudia Stadium, Benin City, venue of the swearing-in, were Minister of Health, Dr. Osagie Ehanire; representative of Vice President Yemi Osinbajo, Edobor Iyamu; Senator Matthew Urhoghide; Senator James Manager, the state Commissioner of Police, Johnson Kokumo; Speaker of the state assembly, Hon. Marcus Onobu; his deputy, Mr. Roland Asoro; and Hon. Omoregie Ogbeide Ihama, member, representing Oredo Federal Constituency.
The event was held with provision for virtual participation in line with government’s guidelines to check the spread of COVID-19
However, the inauguration was nearly marred as the ADC to the governor collapsed on the podium.
The ADC, a Superintendent of Police, dressed in the police ceremonial uniform, stood directly behind the governor and he slumped as Obaseki was delivering his inaugural speech.

But two Department of State Services (DSS) personnel rescued him and escorted him to the sitting arena.
The former Commissioner for Health in the state, Dr. Patrick Okundia, gave him first aid to stabilise him.
The ADC was later put in an ambulance and taken to the hospital.
When contacted on the state of health of the ailing ADC, a senior police officer in Edo State Police Command, who pleaded anonymity, said that “the officer is stable condition.”