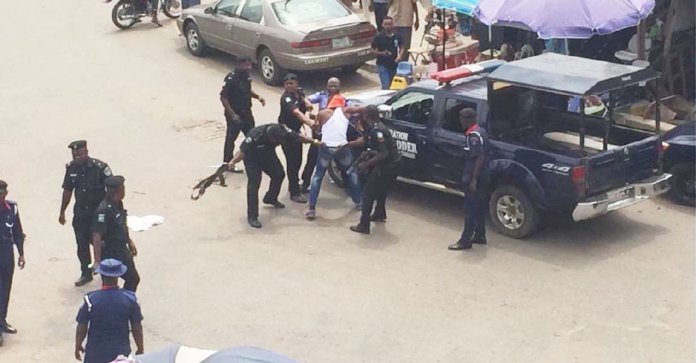 The recent attack and destruction of police stations, instruments and killing of its men by hoodlums who hid under the cover of #EndSars protest stand condemned by all patriotic and peace-loving people of Nigeria. The attack by hoodlums appears to be the worst in Nigeria’s history. An attack that has, for more than a week kept the police off duty, demoralized and instilled fear into the body and soul. A peaceful protest by Nigerian youths in major cities of the country to demand for immediate action by the authorities to the killing, torture, extortion, maiming, and rape of some female victims by the police was hijacked by some unscrupulous elements in the society. The police, from media evidence, played a dirty role by sponsoring and ferrying thugs to the protest ground of these peaceful protesters. The sole intention of the police cannot be far from dubbing these youths as disgruntled elements, enemies of the state with the aim of disturbing public peace. The police did not realize they were planting what could also consume them at the end, and it indeed boomeranged.

A peaceful protest by some persons to attract attention of the government is a legitimate right. The usual approach of the police in civil disobedience is to suppress peaceful protesters without respect to our laws. Nigeria is a country governed by rules, democratic rules that allow for decent ways of doing things.

Much as we condemn the hoodlums for the havoc in the last few days, we must not fail to also condemn the police for the role they played in attacking and sponsoring thugs to attack the peaceful protesters. Let us not forget that the call for scrapping of SARS (Special Anti-Robbery Squad) began in 2017 because of their numerous evils without any action taken by the government other than mere public statements and apologies. We cannot forget the heart-breaking tales of extrajudicial killing, extortion, torture and rape that angered our young people to come out in this recent street protests. We remember Linda Nkechi Igwetu, who was reportedly shot at in 2018, by SARS operatives the day before her NYSC passing out parade. What has happened to her case, any justice? How many of us are doing anything to bring her killer(s) to book? We cannot forget Stella Ifeoma Abugu, another NYSC member that was reportedly raped and murdered while being unlawfully detained by SARS officials in Abuja. What about the case of Kolade Johnson, the young man who ran back to his fatherland for safety from South Africa only to be killed here by his own country’s police for doing no wrong? What about the Awkuzu SARS killings and dumping of corpses in a river? We can go on and on. The government and police hierarchy must do a thorough surgical operation on its men and officers, their modes of operation to curb this unnecessary brutalization and waste of lives.

When the police are fighting crime we are aware and commend them for the good work. But, we can quickly distinguish between the criminality of some of the bad eggs amongst them. They have committed heinous crimes over the years with nobody calling them to order until the youths took to the streets in protest?

In like manner, we also remember those unsung heroes of the Police, men and women who, despite being part of an institution that has the worst welfare package, yet serve with courage and bravery.

Right now, what is needed is building of confidence between the police and the people. The Police Community Relations introduced by the first pragmatic Lagos State Police spokesperson, Alozie Ogugbuaja, must be re-organized for effectiveness and efficiency.